City High was the only team from outside of the CIML Conference to qualify for State. 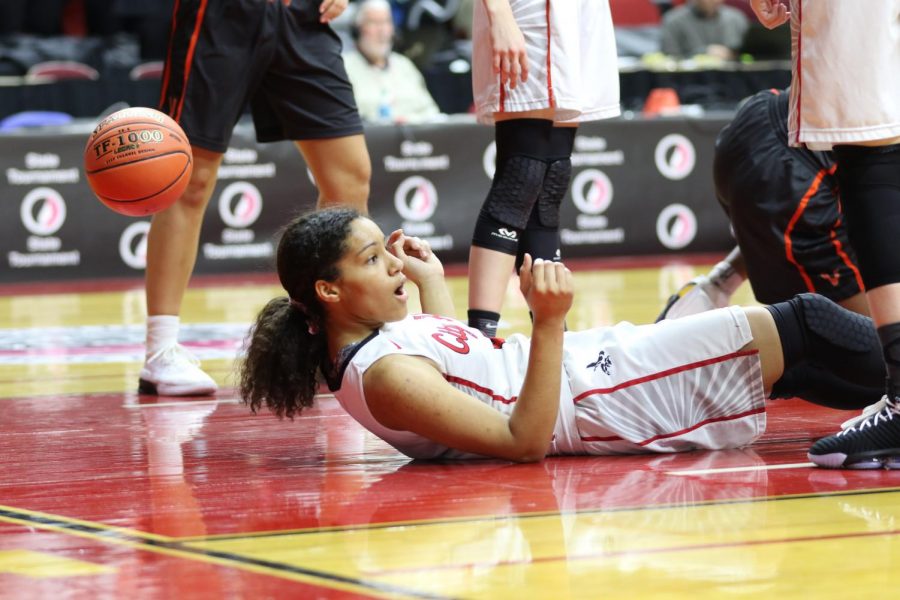 It will be an all Central Iowa Metro League final four at Wells Fargo Arena as City High girls basketball fell to West Des Moines Valley today in overtime. The Little Hawks were the only team from outside the CIML Conference to qualify for State this season.

It was a frustrating loss for City High because the team played well enough to win. The Little Hawks hit nine three-pointers and got production out of their leading scorers. Rose Nkumu ’20 scored 25 points and Aubrey Joens ’20 added 19 of her own. City scored more points than the Tigers in three of four regulation quarters, but a 20-9 point advantage for Valley in the second quarter proved hard for the Little Hawks to overcome in the second half.

City lived and died by the three all night. Freshman Andie Westlake knocked a few down early, and Nkumu hit a season high of five. Nkumu’s final three-pointer sent the Little Hawks to overtime, where Ella Cook ’20, who had delivered through most of the game, missed an open three on the first possession. From there the Little Hawks only scored two more points, failing to hit shots and allowing Valley to get to the three point line. Joens, who still managed to produce for City on both sides of the ball, only hit one of her six attempts from behind the arc.

“We fought hard and didn’t come out on top,” said Joens, “We just need to get back in the gym and get ready for next year.”

That’s the right attitude for a City High team that exceeded expectations this season and brings back all five starters next year.

The 2018-19 season was always going to be a rebuilding year for the Little Hawks after the loss of last year’s star player Ashley Joens. With Ashley now putting up double figures for Iowa State, the fact that sister Aubrey Joens, Rose Nkumu, and Paige Rocca were able to guide the team to a seventh consecutive MVC Title as juniors should be exciting to Little Hawk fans.

City now finishes 19-3 after being ranked number one for most of the year. Coach McTaggert’s full rotation returns next winter, and City will pick up an impressive Freshman class that includes the program’s fourth Joens sibling, Kelsey Joens. Joens will likely see playing time right away.

That combination of time and additions are the exact materials a team needs to jump from Iowa’s Elite Eight to its title game.