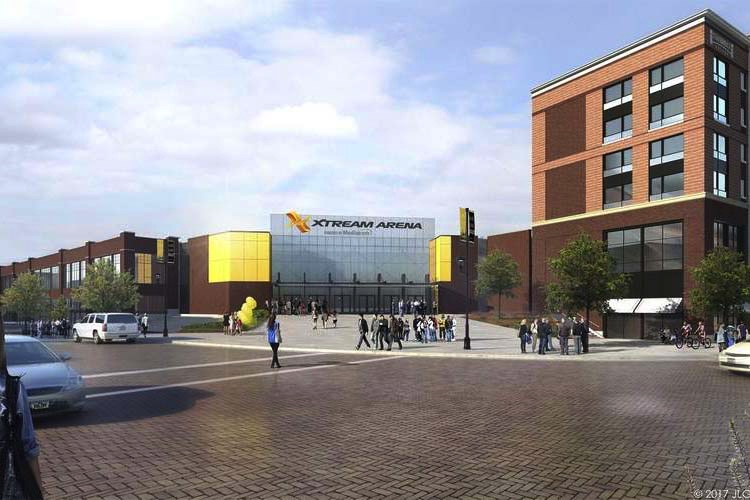 Courtesy to Handout regarding Xtream Arena.

The new Xtream Arena will be an exciting new addition to Iowa City and the surrounding areas. The 190 million dollar project will be built on the Iowa River Landing, near Trader Joe’s and Von Maur. The facility will not only include the main arena, but will also have a field house, parking ramp, two new hotels, commercial, and retail office spaces. The arena will also be home to some other organizations such as the Johnson County Historical Society Museum, the Antique Car Museum of Iowa, and the Hawkeye Model Railroad Club. Brian Hixenbaugh is set to be the general manager of the facility.

“We broke ground in the summer of 2018 and our target opening date [for the Xtream Arena and fieldhouse] is August 2020,” said Hixenbaugh. “Just in time for the 2020 University of Iowa Women’s Volleyball season and the ’20-’21 season for our TBD hockey team.”

There will be lots of different shows, tours, and games that will be open for the public to come to see. Expect to see concerts, family shows, volleyball, hockey, youth clinics, competitions, tournaments, commencement ceremonies, community-based programming tied in with the city of Coralville, large conferences, and trade shows.

Hixenbaugh says, “It’s our goal to make the arena and field house as accessible as possible for everyone in the community to enjoy in different ways. That could be through employment with us, attending one of the events we host, volunteering at a community-based event, being a participant in an event we’re hosting, or through other opportunities.”

The new Xtream arena broke ground in the summer of 2018 and is set to open in August 2020.