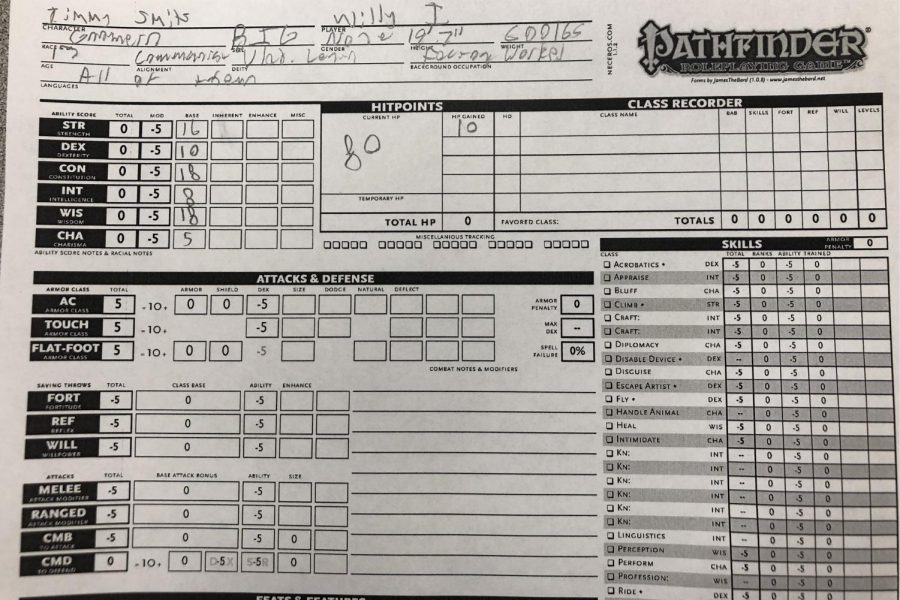 To students Evan McElroy ‘21 and Demetrious Ramirez ‘20, Pathfinder offers many opportunities for them to be creative and have fun doing it. In Pathfinder, worldbuilding, the act of creating the world that the characters are present in, is a major part of the game and establishes how the game is going to be played.

“It’s not fun if you don’t have a world for your players to run around in,” said McElroy. “You have to create a world, otherwise there is nothing to do.”

Because McElroy is the dungeon master, or DM, in this game, it is his job to create the world that the players use.

“I create the story and the monsters that inhabit the various worlds that I create,” McElroy said.

This opens up the option to create very different situations and opportunities that make the game so interesting. The worlds typically become very complex over the time that they are played as well. Some branch out to have pages and pages of story behind them, and are filled with a multitude of well written and exciting characters.

“We even created our own language,” Ramirez said.

In a game so based on improvisation and creativity by the players, worldbuilding is what truly brings it together for the players. It keeps things fresh, and drives players to spend hundreds of hours developing things for their specific game. The most dedicated world builders also add different “planes” with different characteristics.

“Each plane exists separately from the world and can be traveled too.” Ramirez said. “We have hundreds of biome planes, each with a different climate and geography.”

Creativity runs the game Pathfinder and those who join rely on worldbuilding to create the world and environment that they spend so much time in.