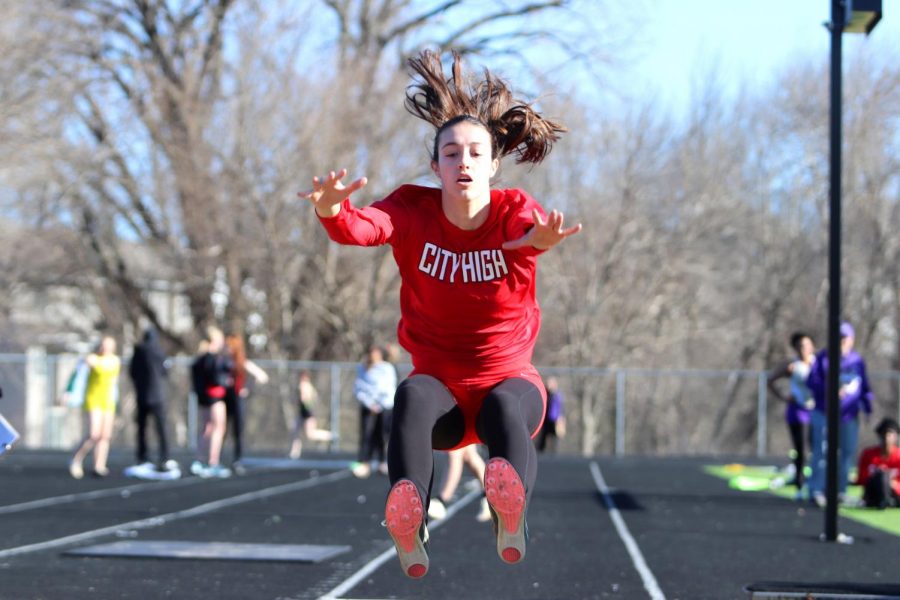 Caroline Schaeckenbach '20 long jumps at a meet at Iowa City West in March of 2019.

City High girls track kicked off their outdoor season on Tuesday at Iowa City West’s Trojan Relays, but, due to cold weather, the event will not count on the team’s record. Though temperatures were too cold for the event to be officially scored city high still competed to their best ability.

“I think overall it went really well,” Lilly Reynolds ‘21, a runner in the 4×800 and 400 hurdles, said. “It’s still early in the season so it wasn’t like [our] best or anything but it was a good way to start the outdoor season because I was pretty happy with my scores.”

Even with the score cancellations big competitors such as MVC foes Kennedy, Prairie, Xavier, and Linn-Mar still competed.

“I was pretty nervous especially about West and Linn-Mar. Linn-Mar, them having a lot of good distance people meant more competition for City,” Reynolds said.

The meet was more than a CRANDIC, featuring non-conference opponents Burlington and Muscatine. The Little Hawks will host their own tournament, the historic Forwald-Coleman Relays, on April 18 for another chance to compete against their rival West High competitors.