Behind the College Cheating Scandal 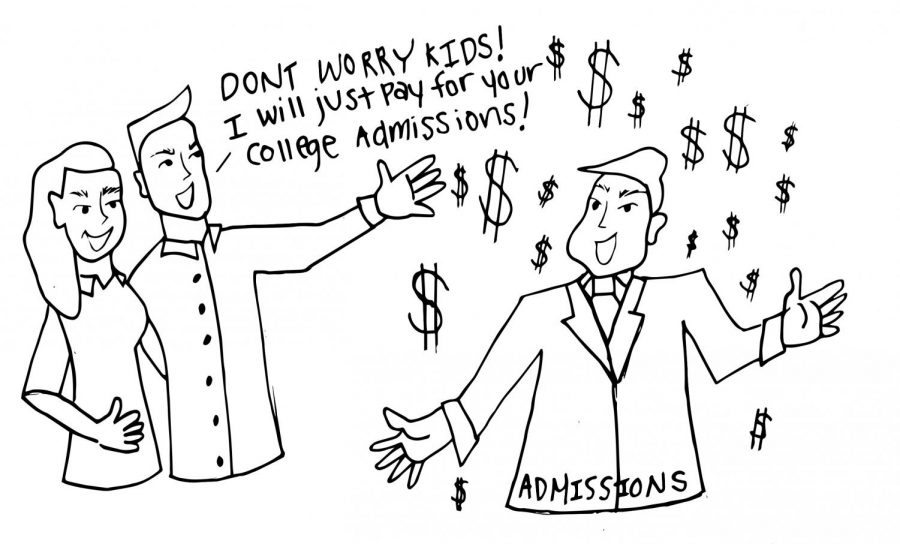 A wealthy parent pays their kid's way into college.

Over the last few decades, college admissions have steadily become more demanding, competitive, and cutthroat. More and more students are academically qualified to attend top universities; over half of teenagers now graduate high school with an A average (The Atlantic). Tutors and prep books for major standardized tests such as the ACT and SAT are increasingly prominent in schools, and as a result, many students’ scores are now higher than in previous years.

As a result, selective universities have resulted to focusing more on the intangibles: extracurriculars and athletics. Students have more and more pressure to contribute to their community outside an academic environment, whether it be by volunteering at a local homeless shelter or being captain of the varsity soccer team. Simply put, American students are expected to fit the buzzword “well-rounded” in order to fit the wants of college admissions officers who must scrupulously choose the few students accepted into their university.

However, as with every situation, people will attempt to take advantage to tip the scales in their favor. In the recent Justice Department college admissions cheating scandal, well-to-do parents paid upwards of $50,000 to increase their kid’s chance to get into universities such as Yale, Stanford, and USC. Forging athletic profiles and employing an elaborate scheme involving SAT proctors, those complicit in the scheme attempted to cheat their kid’s way into the best colleges in the nation.

These acts are despicable. However, while Hollywood actors such as Felicity Huffman are excoriated in the media, those who make large legal contributions to universities that often reach over a million dollars are largely accepted in society, and often given personally named buildings in their honor. In turn, universities then mark the donor’s kids with a “development case” label. For example, a student could be in the middle of his class, with only slightly above average test scores. But when they are marked as a development case, they would be instead treated as top of their class with high percentile test scores.

This hypocrisy is the essence of the shadowy world of college admissions. As lower income students struggle to even afford the costs that come with preparation and testing, the wealthy buy expensive tutors and professional consulting sessions. Those who work the hardest to achieve their dreams in higher education are having their spot taken by someone whose parents had connections and money.

As a student who takes honors and AP classes, as do many of my friends, most nights involve hours of homework. We constantly stress about keeping up with the multitude of assignments given by teachers, and often do not get sufficient amounts of sleep due to this. In addition to schoolwork, time must also be allotted for applying to summer programs, internships, or jobs. To think that someone could erase the time I put into school with a large donation is angering and disheartening. The college application system is fundamentally broken, and must be fixed.

But what is there to do? With colleges needing more and more money to stay sustainable, one may ask what the problem is with large donations. I do not believe there is one, as higher education is benefited by money for research and to pay professors adequately. But what I do think is wrong is the increasing need for students to be economically stable in order to utilize resources that give them the best chance to attend top universities. While colleges claim they are looking for diverse applicants to fill their classes, which is not necessarily incorrect (40% of college undergraduates identify as people of color), this does not excuse the acceptance of unqualified students whose parents pay millions to “enrich” the school.

It is important one recognizes the circumstances they are in. I am not in a position where I am being disadvantaged by my socioeconomic status when it comes to college admissions, and have had many resources available to me as I have begun my search and admissions process. I cannot complain or relate about not being able to afford test preparation, attending an underachieving school, or being the first in my family to attend college. But I believe that, regardless of the situation you find yourself in when it comes to university admission, you should care about how broken the system is, whether it is beneficial or detrimental to you. College is, for many people, the most important and defining time of their life. Whether it be their personality, job, interests, or friends, the time Americans spend in college is life-changing. There should never be a backdoor to take away these experiences from the plethora of deserving students who have worked their whole teenage life for the chance to attend a university which so significantly affects their future.