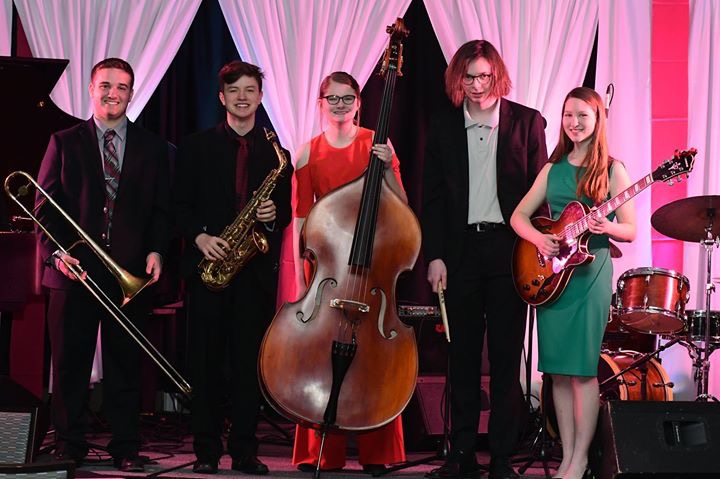 The Jazz Corridor Quintet poses for a photo.

A trombone, saxophone, guitar, bass, and drums with five students playing each of them has created the Jazz Corridor Quintet recently. Students Ana Koch ‘21, Peter Stoltz ‘20, and Kolbe Schnoebelen ‘20 make up the part of the band from City High with Ethan Buck ‘21 representing West High and Vivian Shanley ‘22 from Cedar Rapids. The group was formed over a summer camp that they all attended where they sparked the idea to create a jazz band.

“Ana Koch, Peter Stoltz, Ethan Buck and I all met at a jazz camp called “Birch Creek” in Wisconsin last summer. Ethan knew Vivian Shanley  and we decided to create a combo to play around the area,” Schnoebelen said. “When we got back in town, we all met for our first rehearsal and had a lot of fun playing together.”

Despite playing on their own time for the pure enjoyment of being in a band, the quintet also plays professionally for money. The quintet has already been hired for multiple gigs. They have also been asked on multiple occasions to play for KCCK, a jazz radio based in Cedar Rapids, as well as other events and fundraisers.

“We play for fun and professionally so to speak,” Schnoebelen said. “For example, last September we played at the Hills Bank Youth Salute Reception at the Englert Theatre and got paid $50 each.”

Starting out as a jazz combo, the quintet has stuck to their roots and focused on continuing the jazz theme. However, they have recently begun to play more of the genres born out of jazz such as Funk, Latin, and Swing.

“We play solely jazz, but we play a lot of different styles, like Funk, Swing, Latin and more Modern types of jazz that we listen to.”

The quintet has managed to make their band entirely self-lead and directed only talking to a director if they are looking for a gig to perform at. The group runs in a democratic style, giving each member an equal say in the direction the band is going.

“The group is entirely self lead and we all give our thoughts and opinions on what to play and what gigs to play at,” Schnoebelen said.

With the end of the school year looming overhead, the quintet has begun to look to the future. They plan to continue playing for the next two years. However, there is concern as to what will happen when both Schnoebelen and Stoltz graduate.

“Our group plans on playing through the next school year,” Schnoebelen said. “Once Peter and I graduate, hopefully we can still play together at least on a short-term basis.”

One of their biggest performances was at the Winter Jazz Showcase when Band Director Aaron Ottmar decided to add their quintet to the lineup. Ottmar decided to include the quintet because he thought that the performance at the showcase would help them start their career as well as give an opportunity for band students from outside of Iowa City High a chance to perform.

“I wanted to feature them during our Jazz Showcase to give them a great venue in which to be seen by a large and appreciative audience,” Ottmar said. “Also I wanted to aim for a collaborative effort with jazz musicians at City High and other high school musicians in the eastern Iowa area.”

Being in a band not only a fun way to express the groups creativity, but also it can also help with improving the groups general ability to play. Playing in a smaller band setting helps improve skills that are otherwise overlooked while playing in a larger group such as becoming more independent or individualistic.

“You truly get to experience music in a chamber setting where everybody plays a bigger role than they would in a big band setting,” Ottmar said. “In addition, presenting a group on your own without a conductor is an extremely valuable experience that I believe every musician should expose themselves to. You will find out more about yourself as a musician in this setting and it will push you to a new level of musicianship that you haven’t experienced before.”