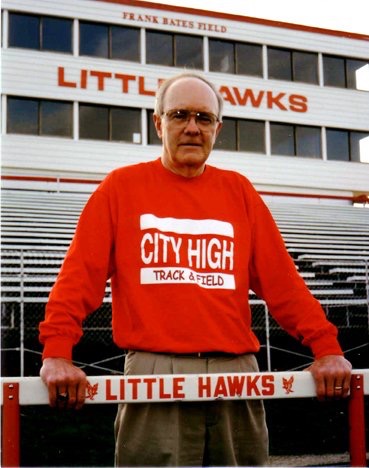 City High has lost a legend.

“There are many, many things that I will remember about Coach Raff,” says A.D. Terry Coleman.

At a school famous for outstanding coaching talent, Coach John Raffensperger left as indelible a mark as any. In 34 years as head coach of the boys track program, “Raff” forged City High into one of the most prolific dynasties in the history of Iowa high school athletics. His teams won 17 Mississippi Valley Titles, 11 conference Super Meets, and from 1992 to 2002 won 10 state titles in 11 years. His teams set national and state records, and his 2001 Medley Relay team was declared national champions.

The accolades and statistics seem endless. Raffensperger saw 56 athletes win state titles and coached 36 Drake Relays champions. City High’s track facility is named for him. But when those who knew him best look back on their time with the icon of Iowa sports, it becomes clear that Raff’s legacy extends far beyond the track.

“Coach Raff was something special, that’s for sure,” says Tim Dwight, “He definitely made running around an oval a lot of fun.”

Dwight, a football and track legend in his own right, won eight individual state titles under Coach Raff. He stresses the sense of family that pulsed through Coach Raffensperger’s program.

“All our coaches were our teachers, so we saw them everyday and we lived with them, you know?” says Dwight. “If something happened in the news or the world, we all went through it together. And that got into practice as well, because the coaches saw you everyday so they knew all of these things about you that you thought they didn’t.”

“Being part of the City High family was just so special,” continues Dwight. “Everybody got along. Everybody held each other’s sweats. We all cheered for each other, we all wanted each other to compete well and win. And people did.”

“One of the things I will always remember is how he cared about each and every boy on his teams,” says Coleman. “Whether you were a state champion or on the JV team he treated you with the same respect. He always made sure he knew the PR’s and season best performances for every single athlete.  I still can vividly see him in the halls the morning after a track meet handing out the split sheet to the boys on the team with not only their times but their PR, top ten in the class, and other information.”

While City High Track may have made things look easy during their incredible run, Coach Raff’s juggernaut wasn’t built overnight. It would be 16 years before Raffensperger won his first MVC Title in 1986. Dwight says Raffensperger outworked his competition, spending hours each night after practice looking at stats, agonizing over any matchup or move that could give his team an edge.

“The dedication that Coach Raff had was unparalleled,” says Dwight. “It’s neat to hear some of the stories about the state championships and Drake Relays they won without a lot of the big star runners we had in the 90s. His later teams did it with grit, and that symbolized what City High Track was about under Coach Raff.”

Raffensperger, who was a City High graduate himself, loved his alma mater. His book, titled It’s a Great Day to Be a Little Hawk, chronicles the history of City High athletics. Now, just as his track dynasty represents a significant chapter in that story, so too will his impact on the many Little Hawk coaches he was a mentor to.

“I will never forget something he once said to me,” says soccer coach Jose Fajardo. “He said: ‘If you stay here at City and you keep doing what you are doing, one day you will become the most successful coach in this school and you will create a legacy that is hard to follow.’

Fajardo says Coach Raff also taught him the importance of continuing to evolve as a coach.

“Coach Raff would always come to talk with me, he always had a word of wisdom and he always asked me about my secret for success,” says soccer coach Jose Fajardo.

“That’s what made him even bigger that he was as person, coach and educator, the ability to listen to others, the desire to keep learning no matter how successful he was.”

Head football Coach Dan Sabers says he learned from Coach Raffensperger not just as a colleague, but as a parent to two track athletes.

“I feel very blessed to have had the opportunity to reap the benefits of knowing Coach Raffensperger,” says Coach Dan Sabers. “One of my sons had him as a teacher and both of my sons had him as a coach. I knew him as a very respected colleague and I consider him to be one of my mentors. There are so many positives to reflect on, I think the best way for me is to just say that anyone who knew Raff is better because of it. I certainly know this is true for the Sabers family.”

From the many responses that have poured in since Coach Raffensperger’s passing, that sentiment seems to be the prevailing theme. From future coaches, sports writers, and star athletes, to people who simply say they found a home, Coach Raff impacted them all.

“[Coach Raffensperger] has definitely been a thread in this community,” says Dwight. “And it’s gone now, which is sad.”

Still, it is amazing to see the number of student athletes, coaches, and families whose lives have been impacted by Coach Raffensperger’s program. His dedication not only to excellence on the track but also in life truly embodies the values of “The School That Leads.”

And that is something that will live on far longer than any record.

Coach Raffensperger’s visitation will be held tomorrow, Sunday, April 28 inside the gym at City High School lasting from 2:00 p.m. to 5:00 p.m. A Funeral Service will be held at 11 AM, Monday, April 29, 2019 at First Presbyterian Church, Iowa City.  His family has requested that, in lieu of flowers, memorials be made to the ICCSD Foundation for the John Raffensperger Scholarship or The University of Iowa Foundation: Track and Field.