A Tale of Two Classes

Students in AP French and French V: Seal of Biliteracy are taught together this year due to low enrollment 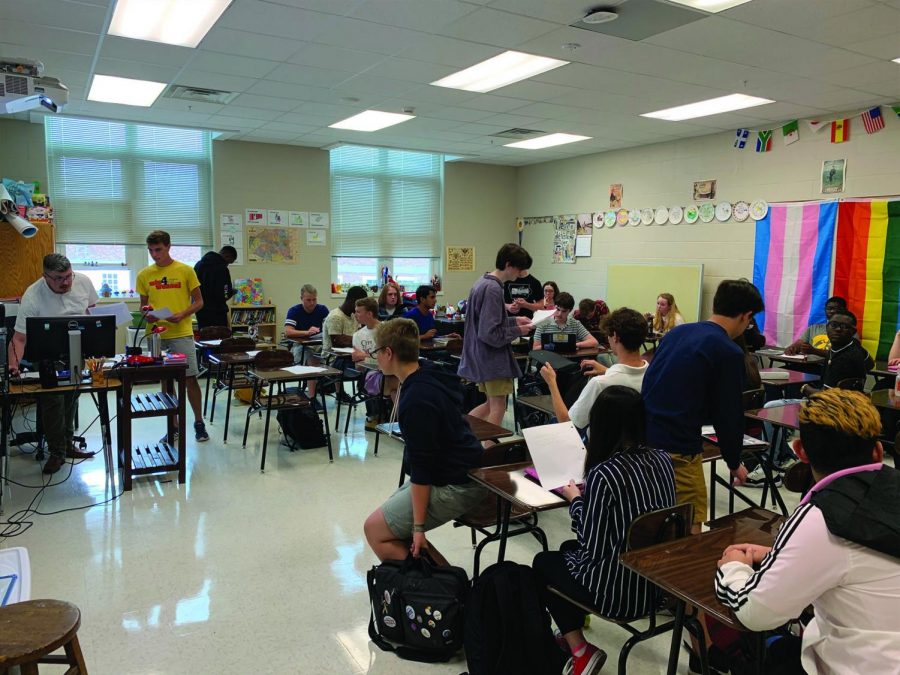 Walking into Room 3303 during sixth period may not reveal that the group of students asking each other, “Comment ca va?” are different than any other French students. But upon further investigation, it soon becomes evident that there is something that makes them unique. In this period, French teacher Tony Balcaen is in fact teaching two separate classes: AP French and French V: Seal of Biliteracy.

“I was a little scared,” Balcaen said. “The two at the same time is new for me, but mostly it was because [Seal of Biliteracy is] a completely new class that I’ve never taught before and I have to teach on top of another class that’s demanding, because it’s an AP class.”

The Seal of Biliteracy program is new to City High this year; there are programs for both French and Spanish, and while the Spanish section has a class of its own, the French section has enrolled only a few students in its pilot year, disqualifying it from receiving its own class period.

“This is a matter of enrollment and depending on how many you have…you can allow so many classes per teacher,” Balcaen said. “I have a big AP class but the Seal is not enough people to be its own class. With Spanish class, you always have enough people. For us, it wasn’t.”

Although Balcaen must teach both classes in one period, they are completely different courses with totally different sets of requirements, content—and students.

“Seal of Biliteracy is a level up from AP French, because everyone in Seal of Biliteracy has already taken at least four years of French,” AP French student Liz Ayers ‘20 said. “Seal of Biliteracy is that you can get a certificate…from the state of Iowa [that says], ‘Yes, you are biliterate. You can speak and write two languages.’ French IV AP, there’s the AP test, and you’re working all year towards that.”

“Right now we’ve been talking about the idea of global citizenship which is related a lot to issues in the world like social justice,” Chen said. “We recently watched a video about migrants in France that were unaccompanied minors but they weren’t able to get assistance from the government because the government classified them as being adults. That’s an example of the issues that we talk about.”

Ayers said that these different curricula can be an issue during class time.

“I don’t really like it because there’s a lot of people in one room and it gives less opportunities for us to ask questions. If we’re doing something, then more likely than not, Monsieur Balcaen is working with the other group,” Ayers said. “He can’t focus on one group at a time. He has to keep bouncing between them. Already, Seal of Biliteracy has had to go out in the hallway several times while we’re working.”

Balcaen said that the main problem when trying to teach both classes at once is time—and a shortage of it.

“If the class periods were longer, it wouldn’t be that much of an issue, but…to cram two into one, essentially, because they’re doing some things that are completely different. This is what’s a little challenging for me is to make sure I get to the point where I need to be when I know I can do less per class period than I would if it were the single class for each of them.”

However, Chen said that he doesn’t find the joint class time to be a major obstacle to learning.

“The alternative, I think, would be the Seal of Biliteracy kids—just six kids—in one classroom. The classroom does seem crowded at times because there are two things going on at once, so if one class is being taught and the other class is being loud, that’s a little bit of an issue,” Chen acknowledged, but added, “Obviously, I can’t talk about other people, but for me, it’s been fine. I’ve been able to concentrate on what we’ve been doing.”

Balcaen said that the situation might be resolved if more students enrolled in either class.

“The AP kids…there are a lot of them, so hopefully the desire to take the level five on its own might be enough…it might be a big enough number to have a big class,” Balcaen said. “This is what we’re wishing for. We’re wishing to advertise for this class at the very beginning level to increase our numbers. The hope is to develop and increase the French and the program.”

Regardless of how the scheduling and enrollment progresses, Balcaen stressed his belief in the Seal of Biliteracy program and its value to students and to society.

“It’s hard, but I’m excited. It’s a good class and it’s a good program and it’s an important thing,” Balcaen said. “Students are recognized more and more with the Seal—in schools and in the workplace. It really means something.”