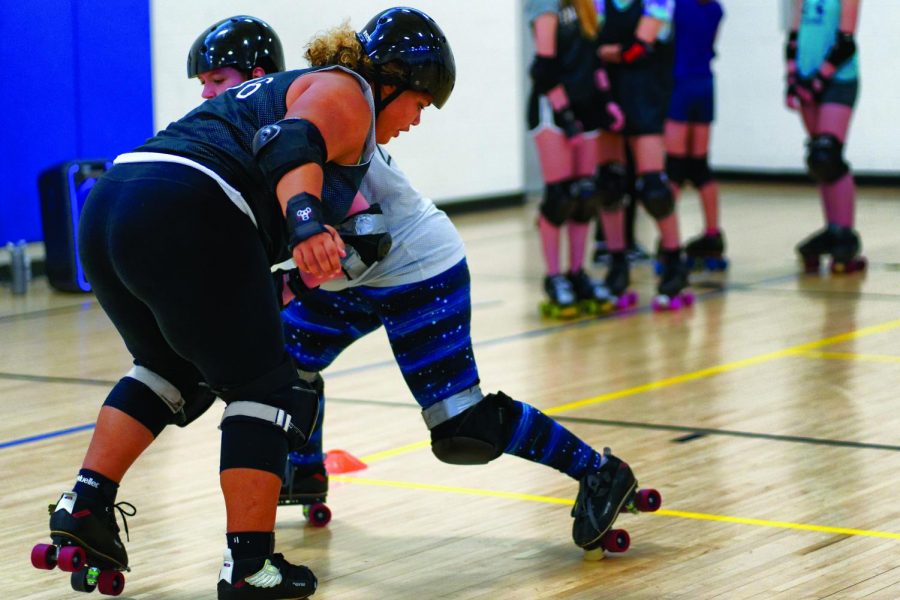 The smell of sweat fills the air as team members of the Iowa City Bruisers push past their opponents, gaining points to win the match. The team is the only free roller derby team in the world. It includes members from all three high schools in the district with an age range of 6-18 years old.

Roller derby provides a community for members to express themselves and to relieve anger. Max Cabaret ‘20 experienced harassment and bullying throughout the time in which he lived in Williamsburg. Derby provided an escape for Cabaret.

“I was feeling very depressed and very anxious all the time. Even when I was at home in my room, I felt very anxious, all people know where I live because it’s such a small town,” Cabaret said. “We have had people try to burn our gay flag in front of our house.”

Cabaret was trying to find an outlet to help with his depression. His sister came to him one day and recommended that he join ICB.

“I mainly joined because first my sister found out about it through people going [to] the woman that told her about it,” Cabaret said.

After joining, Cabaret found a sense of family outside of his immediate one—and it isn’t just him. Multiple players have found comfort within the family that is ICB. One memory that has stuck with Cabaret is from a day when he had experienced issues within his family.

“I was very depressed that day because something had happened and just set me into a spiral,” Cabaret recalled. “[My teammate] just helped me keep my spirits up. [This] has always stuck with me.”

Like Cabaret, Izzy Jurgins ‘22 has also found a family in ICB.

While remembering a time she felt overwhelmed during a match, Jurgins explained how her teammates and coaches made sure she was okay.

“I was not ready to play on the charter team against a good team. We’re going against the team that we never won against and I just broke down,” Jurgins said.  “They’re like, ‘Hey, are you okay?’ and they comforted me a lot. My coaches made fun of me, but in a friendly way.”

The founder and coach of the team, Brian Ferreira, was inspired to create the ICB because of how expensive most roller derby teams in the area were.

“I wanted this great sport to be able to be played by anybody who wanted to give it a try,” Brian said. “Money should never be a reason why someone cannot try a sport. Why do coaches have to make money? Why do venues constantly have to make money? Why can’t people just be happy and give back, just a little bit? It makes you feel good to give back.”

Without funding from team members, the Iowa City Bruisers raise money for their organizations by hosting fundraisers throughout the year. The main event they host is the Skatathon. Donations come from visitors who donate through the craft fair or per lap the Iowa City Bruisers skate. Last year, $5,000 was raised by this function alone.

“We skate as fast as we can in a circle for an hour straight,” Casper Ferreira ‘20, a member of the team said. “There’s people who come for [the craft fair] and people who come to watch the skaters.”

Beyond fundraisers, Brian also reaches out to businesses to ask for donations. There are around 80 members of the ICB and there are numerous expenses for equipment and practice space. In the past, the team had three practices a week, but recently that was lowered to one practice a week at the Robert A. Lee Recreation Center.

“The guy who was getting that facility for us doesn’t work at Mercer anymore,” Casper said. “We are struggling with one [practice] a week.”

Despite financial difficulties, the Iowa City Bruisers have maintained their status in the roller derby community. The team is ranked 11th internationally, and it attended the national championships last July. The team had to reevaluate its strategy when it lost by over 400 points to the number one team in the U.S., the Diamond City Miner from Bakersville, California, in the spring of 2018.

“We didn’t expect to lose that badly. We thought that it’d be at least a smaller score difference,” Casper said. “That game was sort of an eye opener. Our skaters are out of shape. We didn’t know enough about our strategy. We work hard all the time now.”

The team has one practice per week. The charter team, which competes for rankings, practices from 9:00 am to 12:00 pm every Sunday. Nationally, the Iowa City Bruisers are ranked 11th, but the ranking doesn’t mean much to them.

“It’s not so much the ranking that is the accomplishment, it’s all the work that you do to get there,” Tim Williams, a trainer and officiator for the team, said. “It’s the discipline. It’s the support of each other. That’s how you get there. They’re not stopping. They’re not quitting. They’re not giving up. They’re doing everything they can to succeed.”

Many members originally joined the team because of a friend or family member, but stayed because of the community and the sport itself. One aspect of roller derby that Jurgins enjoys is the fast pace.

“When I got on the track, everything I had to do had to be meaningful,” Jurgins said. “As soon as you get off the track, you’re like, ‘What just happened?’ It was a blur. You have to be thinking fast. It’s surreal.”

Another aspect of the sport that members enjoy is the release they feel while playing.

“[Roller derby] gave me a place to safely let out how I was feeling and safely dispose of my anger without actually hurting anyone,” Cabaret said. “I developed worse mental health issues because of my old school, but then I had derby as a place to go, where I had this supportive team. [It’s] almost like a support group because we’re all messed up in our own way.”

The support system ICB provides is vital to its members. Members feel that the roller derby community not only alleviates their stress and anger, but also gives them a home when they need one.

“[Roller derby] has helped me so much through all of my mental health,” Casper said. “It’s a part of my survival. Just like I need food and water, I need roller derby.”