With a little less than a year until the 2020 general election, presidential candidates have been visiting Iowa City to speak to voters leading up to the caucus on February 3rd 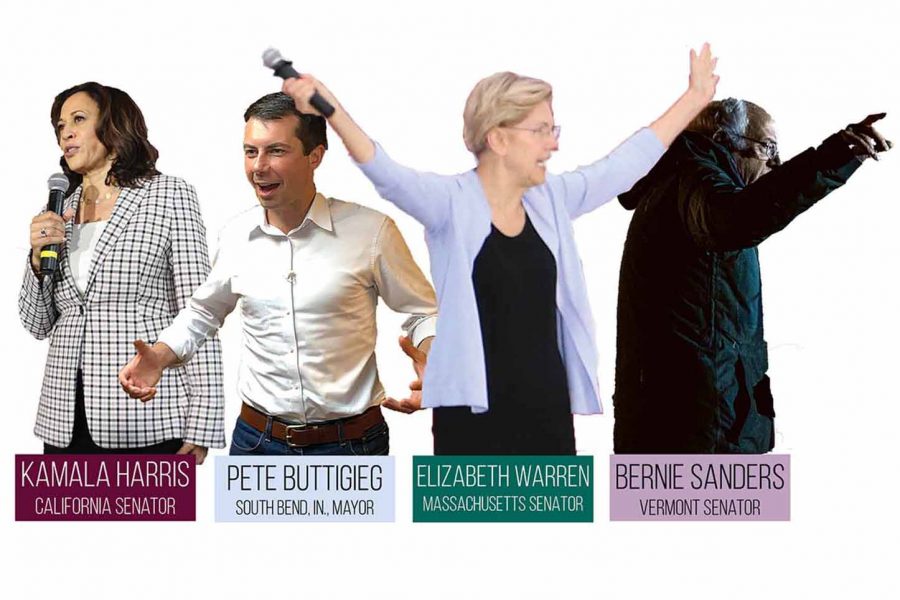 13,000 color-coordinated supporters cheered loudly as their candidates walked out to blaring music on a stage surrounded by fog machines. The Liberty and Justice Celebration in Des Moines on Friday, November 1, was a chance for 13 of the Democratic Presidential candidates to present their ideas to Iowa Democrats. The night started off with speeches from Iowa Democratic Party Chairman Troy Price and Democratic National Committee Chairman Tom Perez. They both spoke about party unity and the need to support whoever gets the nomination.

“I know we will rally around our nominee,” Perez said. “Why is that? Because we all share the same values. That is what unites us.”

Beto O’Rourke ended his campaign earlier that day, despite his presence being expected at the celebration. His campaign staff at the event cleared out his section prior to the event starting. Ads for his presidency still ran on televisions outside of the arena.

“Can we get a round of applause for Beto O’Rourke?” Perez asked, acknowledging and praising his candidacy.

Pete Buttigieg had thousands of supporters in his section cheering as he spoke about how, despite his age, he has the experience to be commander-in-chief.

“If talking about hope and belonging sounds optimistic for you at a time like this, fine. Call it optimistic, but do not call it naïve,” Buttigieg said, “I believe these things not based on my age but on my experience.”

Andrew Yang, the founder of nonprofit Venture for America, spoke about the economy and the workplace while speaking about his experience as a parent.

Senator Kamala Harris’ message was about how high the stakes are for this election and how “justice is on the ballot” in 2020.

Locally, many candidates have been visiting Iowa City to share their message with constituents who with be caucusing in February. Ana Van Beek ‘21 feels lucky to be living in Iowa City at this time because she gets to be close to the political scene.

“I think it’s really cool how close [a Harris event] was in Iowa City and how [Harris] spends a lot of time here,” Van Beek said. “It was a really great opportunity.”

While multiple Democrats have visited Iowa City, the Republican candidates have not been in town because there are not as many candidates. Noah Hartwig ‘21 feels like the election could go either way but would like to see Donald Trump reelected.

Jake Roth ‘20 has been to local political events, including seeing Buttigieg speak.

“I think it was cool because Iowa City is not a huge city, so I don’t expect a lot of famous people to come here,” Roth said.

The 2020 general election will be held on November 3, making it less than a year away.

“I think this is a really important election, especially because it is after an impeachment [trail],” Savanna Josephson ‘21 said. “All of the [Democratic] candidates have good ideas so [no matter who] gets the nomination I will be happy.”