It’s Not All in Your Head: Mental Health in Athletes 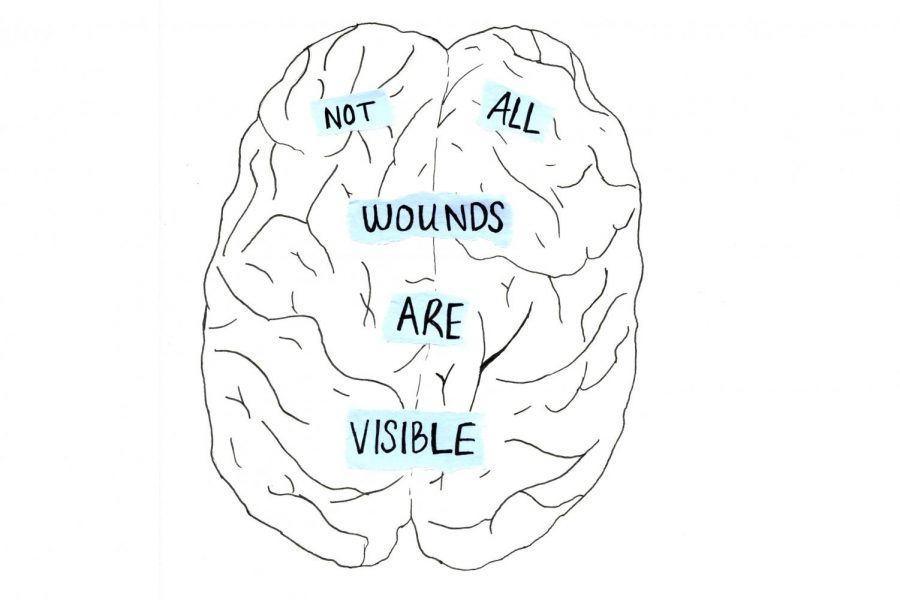 Before the sun has risen, Heidi Stalkfleet ‘22 pulls her goggles down over her eyes and dives into the cold pool. This early morning swim practice is followed by school, another swim practice, homework, and finally sleep–only to get up at five am and do it again. This is the daily routine of many high-level high school athletes. With all of the practices, games, meets, lifting sessions, and school on top of it all, student athletes can end up feeling overwhelmed, stressed, and anxious.

“Since I swim, and because it is an individual sport, it’s a lot of pressure riding on you instead of a whole team,” Stalkfleet said. “I feel like there’s a lot of added pressure on races and added pressure that I put on myself, because I tend to do that even though it’s not good.”

The most common types of mental health issues seen in athletes are performance anxiety and General Anxiety Disorder. Performance anxiety can include anxiety or stress before or during a sporting event or caused by pressure put on them.

“This is how I can distinguish between the two mental health issues,” Shelby Perkins, a sports psychologist who works at College Park Neuropsychology, said. “If an athlete is diagnosed with Generalized Anxiety Disorder, you will see excessive worry and noticeable changes to their daily functioning even when their sport is not present.”

“Performance anxiety [in athletes] is when the athlete has anxiety specifically tied with the sport they are playing,” Perkins said. “But you may not see anxiety in other daily activities such as talking to peers, raising their hand in class, or meeting new people.”

Another concern with student athletes is that they can be stressed out from the heavy workload from school.

“I think the biggest thing is [that] they are student athletes [and] we oftentimes expect quite a bit from them,” Philip Hansen, the athletic director at City High, said. “We expect them to go to class for seven hours, seven periods a day [and] we expect them to stay multiple hours after that.”

“I think sometimes you can get back late from practices or meets or games and you go to bed late, so you get up earlier than usual and that can put stress on getting homework done,” Wedemeyer said.

The coaches and athletics department at City High are aware that students often feel worried about balancing schoolwork with their sport and do everything they can to help.

“My coaches are aware of how getting homework done and stuff is important so they can help us with that,” Wedemeyer said.

“We try to expose as many people to competition [as possible],” Hansen said. “When you get channeled into one sport, you are competing, but having different competition and different aspects on different team can lead to a more complete athlete.”

Perkins explained that the main problem with early specialization is that athletes can put more pressure on themselves to succeed in a sport when that is the only sport they are doing year round.

“Many athletes who play multiple sports or are involved in multiple facets within their school tend to have less anxiety and depression as well as less feelings of pressure, in my experience,” Perkins said.

Perkins pointed out that this is solely based on her own experience and it could vary across different communities, states and countries. However, for people that love their sport, early specialization can be a positive thing.

“I started swimming when I was eight and I sucked at everything else,” Stalkfleet said. “So, [swimming] was suggested to me and I tried it. I loved it and I’ve loved it ever since.”

The concern about early specialization can come into play when pressure is being put on an athlete by others.

“I think it can only be harmful if there’s influence from someone else,” Stalkfleet said. “So if your parents push you to do something when you’re young and you grow up doing it and you find that you don’t really like it, but you feel stuck in it, I feel like that’s pretty negative.”

“Athletes are always looked at as more of the strong, stoic, ‘I can do anything by myself’ type and it is hard [for them] to admit they want help,” Perkins said. “Once you get help, you will notice a complete change in your everyday life, such as happiness and positivity.”

At City High, student athletes are encouraged to speak to a coach, teacher, or any other adult in the building if they have concerns about their mental health.

Hansen recommends that student athletes find someone to talk to.

“My advice would be to find that one person or group of people that you feel most comfortable with and be honest with them,” Hansen said. “There’s probably somebody else going through it, so we can work on it together.”