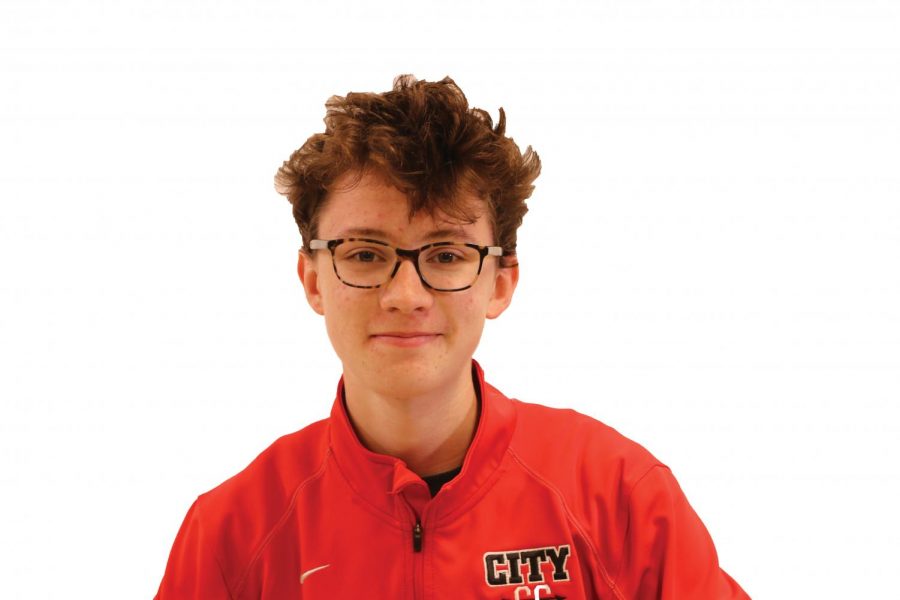 Ford Washburn '23 was the only runner on the City High boys cross-country team to qualify for state. He placed in the Top 20 of his class with a time of 16:10, beating all other freshmen at this meet.

Sometimes people surprise themselves. They attempt something and do so much better than they ever expected.

Ford Washburn ‘23 did not have high expectations for his first high school cross country season, and would never have guessed that he would be the only boy from City High who would qualify for state cross country meet.

“I didn’t think that as a freshman, not doing summer running at all, I would be fastest on the team by the end of season,” Washburn said. “I thought I was going to be really bad.”

Washburn played soccer for several years in New Mexico, but when he moved to Iowa City during junior high, he decided it was time for a change.

“I was like, ‘Hey, now that I moved to Iowa, I should try something new,’ so I went out for track in eighth grade,” Washburn said. “I just thought I would try running and see how it went.”

At the first cross-country meet hosted by the Iowa Mennonite School, Washburn ran a time of 19:07. Since then he has improved steadily until he ran a personal best time of 17:18 at the Bud Williams Cross-Country Invitational.

“At the beginning of summer, the coaches were like, ‘We’ve got this fast kid named Ford.’ I was like waiting for Ford to show up and all of a sudden he showed up and started doing really well,” Coach Jay Welp said.

Washburn started off the season in the group called Other Varsity One and eventually moved up to Varsity as his times improved. At Divisionals, he got seventh place overall with a time of 16:31.

“I just felt super nervous for this last race because the one before that I finished first for City,” Washburn said. “The last mile, there’s always somebody in City that’s ahead of me and I just look at them and just run faster until I catch them, and then try to pass them.”

Though Washburn was the only one who qualified, the rest of the team continued to train with him as he prepared for the state meet.

“I’m really glad that they were kind enough to do that, because it would have just been the coaches practicing with me if they ha[d]n’t,” Washburn said. “I am truly thankful that they did that for me.”

At state, Washburn finished 20th in class 4A with a personal best time of 16:10, beating all the other freshmen in any of the four classes.

“I was pretty nervous and scared that I might not be able to place as high as everybody thought I would. [Now,] I’m really happy about how I did and how I placed,” Washburn said.

Washburn enjoyed the cross-country season, especially being able to meet new people and spending time with the team. He is sad about the end of the season, but has high hopes for the coming years.

“The dream is for him to just keep getting better every year. Getting some experience [at state] and coming back next year, a little more experienced and a little more seasoned,” Welp said.