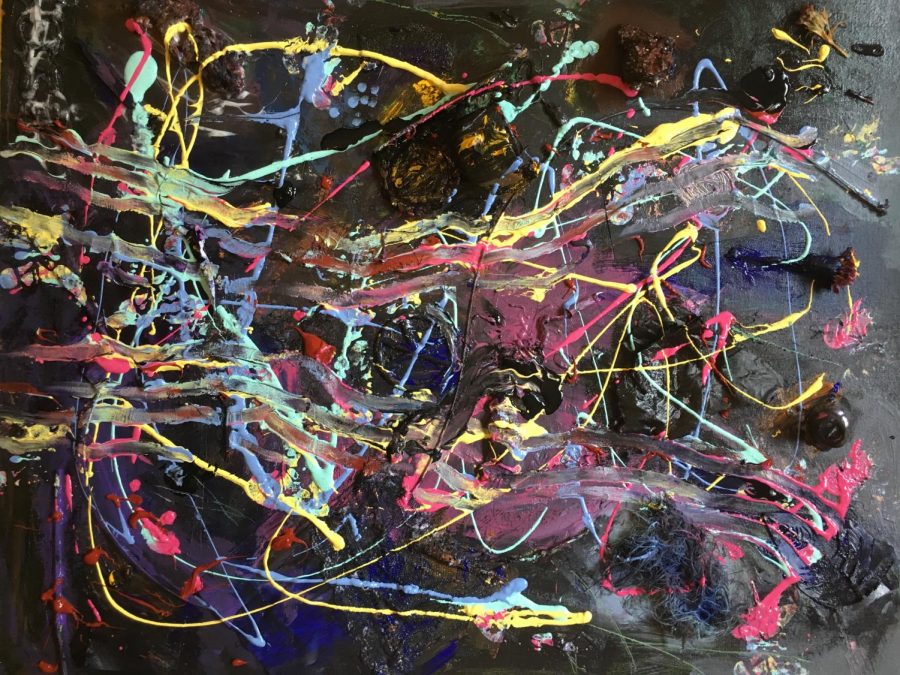 Adorned in a vintage dress, her hair in a casual updo, Daphne Knoop ‘20 smears plaster and paint over a wooden board in the art room. When finished, her creation will be interactive, tangible, and chaotic, contributing to her developing portfolio of evocative artwork that will serve as the cumulative project of her second year taking AP Studio Art.

“I don’t have a professional or technical art background,” Knoop said. “I was really nervous [taking this class last year] because I’m not a very good drawer and I don’t measure things, and I don’t know the proportion rule, but it was really great. My favorite thing is that it’s really self-driven, so you get to see all the different students who are doing their own thing. Everything everyone’s doing is super cool and it’s amazing to see the way different people come together to do different kinds of art. You can really see people’s personalities manifest in their art and the way they interact with each other. It’s real fun.”

One aspect of Knoop’s life that is widely known about is her aptitude as a cellist. She has played the cello for a very long time, becoming very dedicated around the age of fourteen. Currently, Knoop is the first chair cellist in the City High orchestra and has received much recognition for her achievements. But the prominence of cello in her life has not stopped her from becoming a rising artist.

Last year, Knoop experimented with many standard mediums such as acrylics, watercolors, and ink. Her pieces included explorations of heteronormativity, recycling, pink and blue color schemes, and several portraits of Oscar Wilde. This year, she is plowing a path for a focused, experimental portfolio, beginning with two pieces she made over the summer.

“I made a quilt this summer, and that was really great because I’ve always wanted to make a quilt,” Knoop said. “It’s a very feminine quilt. I tried to use a bunch of materials I find really comforting, but then I also didn’t worry if I made a mistake. If you look at it from far away, it looks like a nice quilt, but then you look closer and [there’s] some frayed edges, the fabric is all reused. Clearly it’s not mapped out perfectly, but I’m a big fan of that one because I like the way it looks, and it’s comforting, and it was a big step because it was something I’d wanted to do. My other favorite piece is a painting that was titled ‘Anxiety’. I was going to channel anxiety when I was making it: I got a stomach ache! But I made it, and it was really rewarding to see it finished.”

Knoop’s quilt and the “Anxiety” painting have two things in common: the goal of channeling her emotions when crafting it, and the ability for them to be touched by an audience. On the day of presenting her artwork, Knoop offered the class to touch her pieces, and one by one, students lined up to feel the paint-covered twine and hand-stitched quilt.

Her current piece featuring plaster and paint will represent her vision of love: buried in the plaster are words cut from scraps of paper, string, lace, and other items she handpicked to collage. Knoop’s portfolio is supported in process and concept by her own personality and way of dealing with challenges.

“I consider myself to be an absurdist,” Knoop said. “I tend to laugh [challenges] off. I’m an emotional person in the present. If something bad happens to me, I will sob and sob, and then an hour later I’ll be laughing at it. It’s the same thing if I don’t like a piece of art. I’ll get really frustrated and then I’ll stop, but then I’ll make jokes about how bad it was from then on.”

Knoop shares a similar philosophy when recommending others to take the class, particularly encouraging people to get out of their comfort zone and welcome possible failures.

“[Think] of something you actually don’t necessarily understand,” Knoop said. “For some people, their first instinct is ‘Oh, I want to draw,’ and so they try and draw something without having much experience, and then they get discouraged because it’s hard to draw. For me, I was really curious about finger painting, so I just finger painted to see what would happen. Kind of like that. [Find] a medium you want to try and draw just for the fun of it to see what will happen, without expecting an end product [or] how it’ll look, but more about the experience of making it.”

The AP Studio Art experience has been a very positive one for Knoop over the course of both years.

“It’s a chance where I get to actually think.” Knoop said. “When you’re doing art on your own, it’s more about what you’re actually capable of and what you can make. You just have to constantly be thinking about what you want to do, how you’re going to do it, and sometimes you fail. I think it’s best to acknowledge that. In the grand scheme of things, it’s okay.”