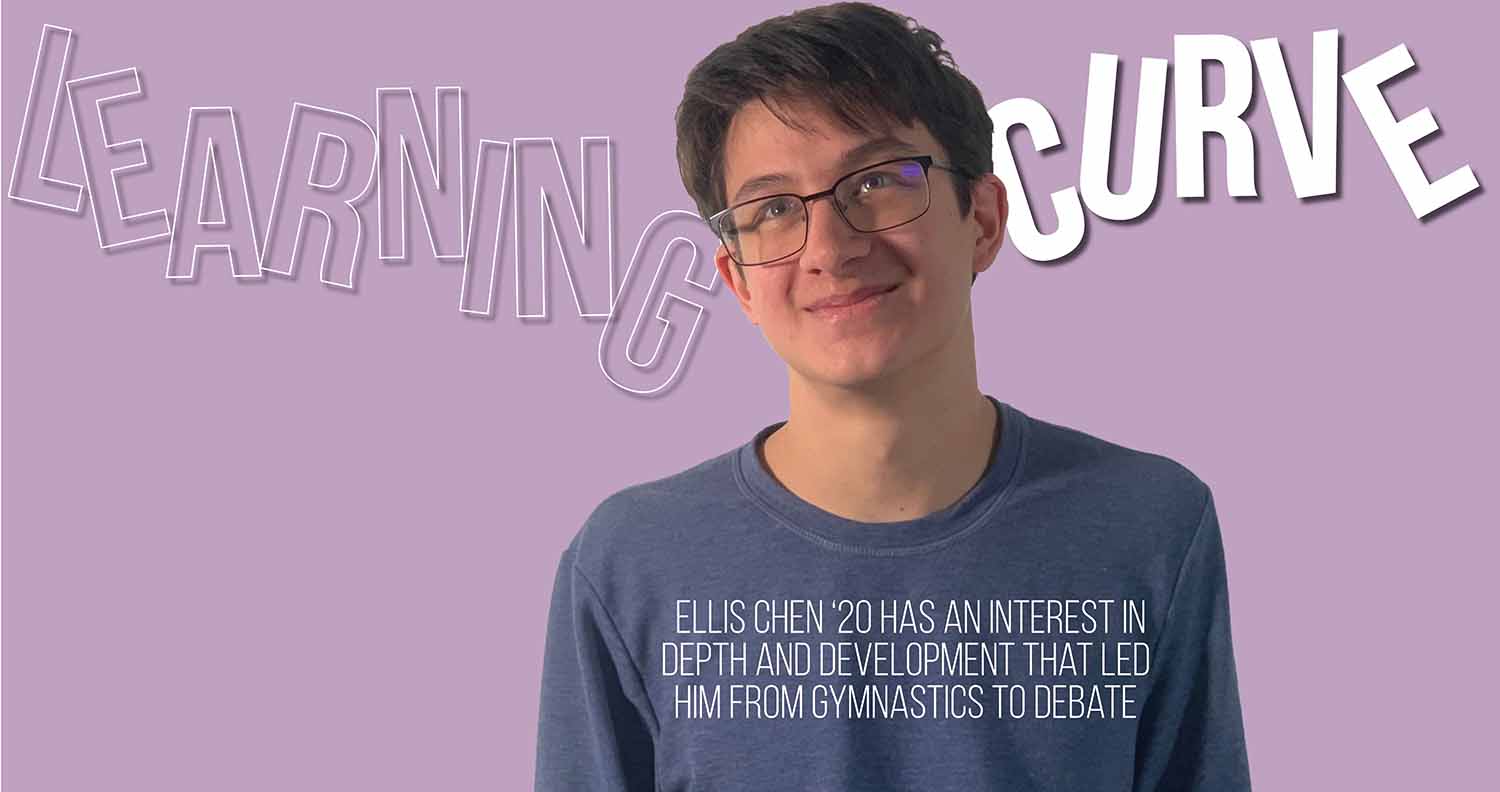 Ellis Chen ‘20 sometimes makes unconventional choices. For one, he’s a fan of peanut butter and pickle sandwiches. But that’s nothing compared to another combination that most people wouldn’t have necessarily expected: In the spring of 2018, less than a year after Chen had quit gymnastics, he decided to join debate club.
“The thing about gymnastics is…it’s a very time-intensive activity, so you need something that you can really get in-depth on,” Chen said. “I quit gymnastics, so I was like, ‘I’d better do something, otherwise I’m going to be ridiculously bored.’”
The choice of debate wasn’t random. Chen has always been fascinated by the way that a skill develops in a particular pursuit.
“In…gymnastics, running—which is another thing I was interested in—and debate, there’s this idea of how things end up developing and how you improve yourself,” Chen said. “In gymnastics…you’re always striving for perfection, but it’s almost impossible to actually end up getting there.”
Ryan Carter ‘20, Chen’s stepbrother, said that despite Chen’s assertion that there is no perfection in gymnastics, Chen did very well in the sport.
“He was really good. He probably could go back into it and still be really good. I mean, he got to be one of the top guys around, in the region,” Carter said. “He definitely could have kept going on with gymnastics through high school and gotten even better if he wanted to, but it just took up a lot of his time. That was a big thing. He was spending so much time in the gym.”
When Chen made the change to debate, he saw opportunities for development he wanted to explore, in much the same way as he saw them in gymnastics.
“You’re like, ‘I did this skill in gymnastics; now I’m going to do it with my toes pointed, because that is better aesthetically,’” Chen said. “It’s almost the same thing with debate: you research an argument and then you have to vet it yourself: ‘How can I improve this argument to maximize the utility of it in a round?’ Then you’ll use it in a round and people will answer the argument that you’re making…so you end up with third- or fourth-line responses to the arguments that they’re making against your argument. That’s an idea about development that is, although simple, very fascinating to me.”
Chen didn’t begin debate until the spring of his sophomore year, fairly late in the game for an activity with a steep learning curve. Vince Woolums, City’s debate coach, said that Chen’s experience in gymnastics helped him acclimate.
“There’s a subjective element to debate where…every judge is different, and so you have to learn how to debate in front of different people,” Woolums said. “I think he can spot that there’s a perfection—in gymnastics, there’s a ten, an achievable goal. I think that informs the way that he prepares himself for debate, by doing all sorts of drills and redos and strategizing about it.”
Chen spent about 15 hours a week on gymnastics before he quit. Now, he spends 20 hours a week on debate. He said the “depth over breadth” approach that he now takes to his activities has helped him achieve on a higher level in debate.
“Ideally, I’d be doing a lot of things very well, but mostly it’s doing one thing very well,” Chen said. “Last year…I was also working a job, so for the first half of the year it was kind of terrible; I was sleeping four hours every night. This year, I’m doing a lot better on being more disciplined with myself. I think I’ve started focusing more on the quality of the work that I do rather than quantity, so that allows me to work more efficiently and learn the content better.”
Carter thinks that Chen’s skills and work habits lend themselves well to debate. He mentioned that in recent weeks, Chen and his partner Simon Weiss ‘20 won competitions and qualified for the Tournament of Champions, a prestigious national debate competition held at the University of Kentucky.
“He really goes all out and he’s always practicing and prepping stuff for debate. He’s improved so much on that and it’s just become such a big part of his life,” Carter said. “My parents…never really see me or Ellis that often because we’re always out of the house doing things. I understand the obsession with something like that, where you just want to spend all your time doing it, because it’s something you love doing.”
Chen said that the whole City High debate program brings a depth of understanding of the content to competitions and that it helps them succeed.
“I [did] hundreds of practice speeches…I think depth over breadth is exemplified by the way we do research. You want to know [the other team’s] stuff better than they know their own stuff. I think that’s really part of how it works for us in terms of depth,” Chen said. “It’s a fun activity. We have more tournaments. Stay tuned.”