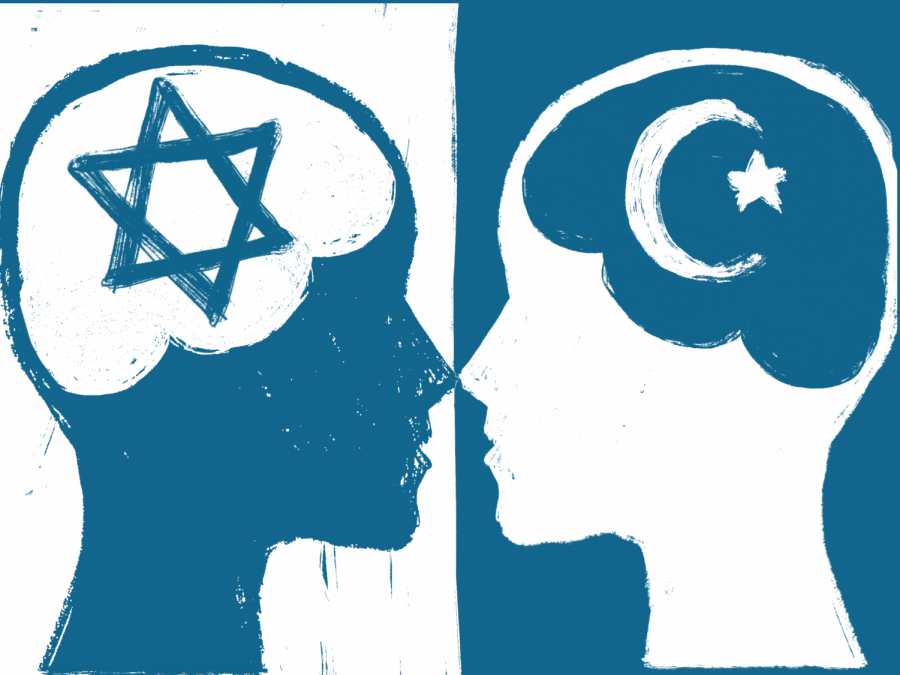 The result of the 2016 presidential election provoked anxiety among many Jews and Muslims. Many were discouraged with the xenophobia that increased following it.

“Right after the election of Donald Trump, there seemed to be this spontaneous coming together,” Sarah Frank, co-organizer of the Iowa City/Cedar Rapids chapter of Sisterhood of Salaam Shalom, said.

The 2016 press conference for the Sisterhood of Salaam Shalom attracted 500 women, a record number of attendees since the organization was founded in 2010.

“There was such an onslaught of women from all across the country that wanted to know about Sisterhood of Salaam Shalom,” Cantor Gail Karp, co-founder of the Davenport chapter, said. “There were 50 chapters at that time, and now there are 150.”

The mission of the organization is to build relationships between Muslim and Jewish women and teenage girls, and commit to ending acts of xenophobia and engage in social action work.

“There is rising bigotry in this country. Maybe it’s always been there, but now it’s becoming more visible and it feels like it’s spreading,” Frank said. “I think Muslims and Jews are two of many groups who currently are facing hatred and I think there are a lot of similarities between Islamophobia and anti-semitism.”

The hope of Sisterhood of Salaam Shalom is that bringing together Muslim and Jewish women can fight hate, negative stereotyping, and prejudice, and help put an end to anti-Muslim and anti-Jewish sentiment.

“It seems like a natural alliance [and] a source of friendship. Creating social bonds, but also a sense that we’re stronger together,” Frank said.

With over 150 chapters, the sisterhood has an estimated total of over 2,500 members throughout the United States, Canada, and England, along with teen chapters in nine states. There have been three meetings of the newly opened Iowa City/Cedar Rapids chapter. Each chapter meeting is held in a different location.

“We did an icebreaker and that was our first meeting, and from then on, there’s been a blend of getting to know each other and sharing our personal religious path as Jews and Muslims,”  Karp said.

Every meeting can vary in length, and is held in a different location. Although each meeting is a little different, the core value of respect never waivers. The groups of women travel to mosques and synagogues and share different foods and stories. On one particular occasion, the group gathered in the Cedar Rapids Mosque and looked at a presentation of a member’s family history.

“[This is the] idea of an ongoing meaningful relationship. In fact, when one of our members got married, she invited the entire chapter to her wedding,” Karp explained. “There were seven women with hijabs and their husbands in the synagogue for this wedding. It was…very wonderful, the reception and everything. It was wonderful.”

According to the United States Department of Justice, in 2018, 18.7 percent of hate crimes were motivated by religion.

“Muslims and Jews are two of many groups who currently are facing hatred, and I think there are a lot of similarities between Islamophobia and anti-semitism,” Frank said. “It seems like a natural alliance, a source of friendship, creating social bonds, but also a sense that we’re stronger together.”

In order to make each chapter successful, for the first few years, every member of Sisterhood of Salaam Shalom has agreed to not discuss controversial conflicts like those surrounding the Middle East.

“We felt that in order to build trust and because in prior programming before Salaam Shalom, we saw a tremendous drop off during points of conflict, like the summer Lebanon was bombed,” Karp explained. “People were not comfortable, and they didn’t come.”

Both communities are hopeful to have these conversations in the near future. Chapter leaders are learning ways to successfully delegate it.

“I have a very close friend, she’s from a Muslim background; it’s still a hard conversation, but because we care about each other so much and respect each other, it’s possible to have that conversation,” Frank said.

Dr. Mehnaz Afridi, a director of the Holocaust, Genocide and Interfaith Education Center and professor of religious studies in New York, has led groups of Jewish and Muslim women ages 17-77 to Auschwitz, Germany, separate from Salaam Shalon, to learn more about the Holocaust and its victims. She has had success in leading conversations about the Palestinian-Israeli conflict by partnering everyone on the trip and giving them images, asking what they thought after each one.

“I heard conversations and some of them didn’t agree but it didn’t mean that they couldn’t have a discussion,” Afridi said. “I actually think we need to have that discussion more often, as challenging and painful as it can be. I didn’t want to have that conversation after Auschwitz [but I did].”

“I love the friendships, so after our trip [to Germany], we created a WhatsApp group. We post articles and pictures of something we’ve done in the chapter, or [when] we’ve done activism or spoken at a rally,” Afridid said. “It is just really beautiful [to see] the connection that we have as Jews and Muslims. It’s sustainable, it’s not something that just dies away.”

The date and location for the next Iowa City/Cedar Rapids chapter meeting has not been determined, but a survey will be sent out to gauge interest.