“Choirs for a Cause” Benefit Concert Kicks Off Show Choir Season 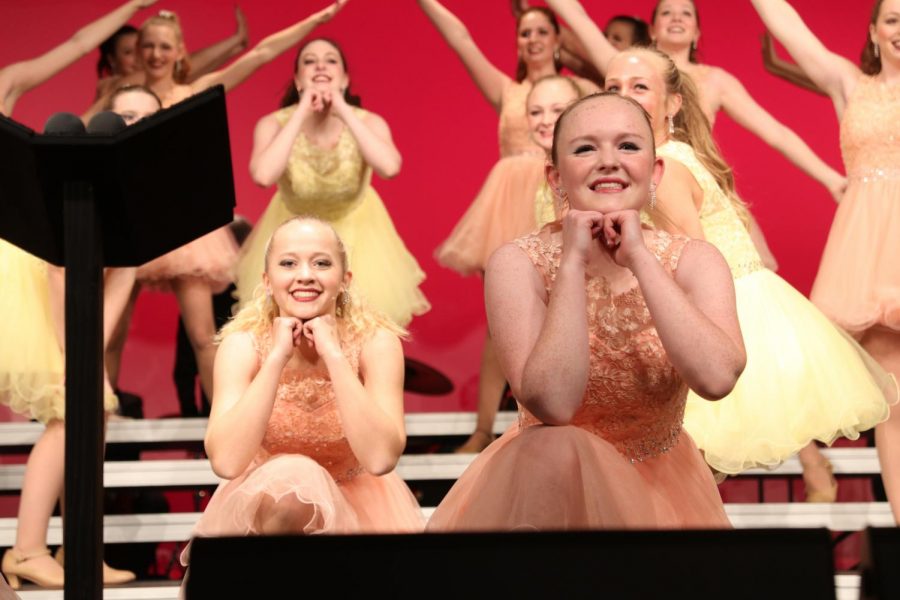 Charisma performs at Liberty High School during the annual Choirs for a Cause event.

Backstage was a whirlwind of dresses, shoes, instruments, and stagehands. The audience was standing-room only, packed with parents, performers, and supporters of show choir, watching the six local show choir groups performing on Liberty High School’s stage at the annual Choirs for a Cause benefit event. This year, the night’s proceeds went to the Fight with Flash Foundation, a charity dedicated to the legacy of Austin Schroeder, who passed away from cancer in 2015.

“We wanted to honor and celebrate him and that foundation’s work,” Tyler Hagy, director of City High varsity show choir Fourth Avenue Jazz Company, said. “I think it’s a really special and important event for everybody that we can offer. We’ve put a lot of work into doing the show [and giving] back to various causes over the course of the next several years, finding new charities and educating the students as well as the public about some of these worthy causes that may not get as much limelight as others in this community.”

The money raised from the Choirs for a Cause event used to be dedicated to scholarships throughout the district, but are now targeted towards various charities. Last year, the money was donated to the Music Auxiliary. This year, West High’s prep show choir Showtime’s performance was based on the life of Austin Schroeder and tied in directly to the proceeds. This is a continuation of a theme Fourth Ave began last year with their performance based on “the Wave” tradition from the crowd at Kinnick Stadium to the Children’s Hospital.

“Finding the ways that [the Wave] was meaningful not only to me as just a human but to the students and this community, and again focusing on the aspect of giving back and not taking for granted the opportunity to do something like that,” Hagy said. “To bring that to a wider audience through the medium of show choir is also very special. [People] were excited to see us again this year and what we would bring to them. In general the show choir community is moving more toward the story-driven angle – not everybody – but more and more people are jumping onto that bandwagon and… we were contributing to that trend.”

City High’s prep group, Charisma, performs with a theme of self-empowerment this year, and Fourth Ave’s show is based on the moon landing, featuring soloist Ian Allen ‘21 depicting Neil Armstrong.

“Last year, although it may have been a more emotional show, this year has definitely been more powerful dance-wise,” Thomazin Jury ‘21, in her second season with Fourth Ave, said. “[Choirs for a Cause] was a lot more hectic compared to last year. Everybody was very on edge, especially because this year City and West’s varsity groups were doing the same song, ‘Pressure’, and we were all excited to see their improvement as well as ours.”

Choirs for a Cause is the only event throughout the show choir season where the three public high schools in the district perform for each other in a non-competitive setting. This year marked the premiere performance of Liberty High School’s all-girls prep show choir, who opened the event with their “A Night in the City” theme.

“It was very special… for us to have a sibling show choir to Charisma in the district,” Hagy said. “To see [Liberty] step out with two groups was great and to see West carrying on the tradition of excellence that they’ve built up over there was really special too.”

In addition to being a benefit concert and a chance for the show choirs to practice performing in front of an audience together before competitions begin, it also marks the realization of lifelong dreams for members within the choir, like Whit Jury ‘23. This was his first official performance with City High show choir, besides the Winter Home Show, in his high school career.

“[Fourth Ave] means a lot [to me] because literally no other schools that I know let the boys immediately into the varsity group,” Jury said. “It’s intense, but I was able to get used to it fairly quickly, and it’s a lot of fun. [In] seventh grade I saw Fourth Ave’s performance [for the first time] and it absolutely blew me away… It was incredible and I really, really wanted to be a part of that. And now that I’m actually here, it’s weird. Younger viewers, especially performing here when elementary school kids were coming, they seemed to be the most excited and that made me really, really happy. That makes me really hopeful for what’s going to be coming up in the future for the theater program.”

As competition season kicks up, the show choirs will be judged on their technique, energy, expression, and sound, performing with not only local groups but students from across the state. The chance to directly benefit the local community with the performances has provided an energetic kick-off to the demanding season.

“It was a lot of fun to have that first actual performance to dance with these people who have been into [show choir] since before they were here at City High,” Charles Faden ‘22, who is also in his first year with the varsity group, said. “It’s really amazing to see these other schools doing the same things we were doing, seeing how the same kind of processes turned out something completely different around the district… to go up there and for people to see that and to see what you can do with time and dedication is really cool.”