A Little Hawk in Green 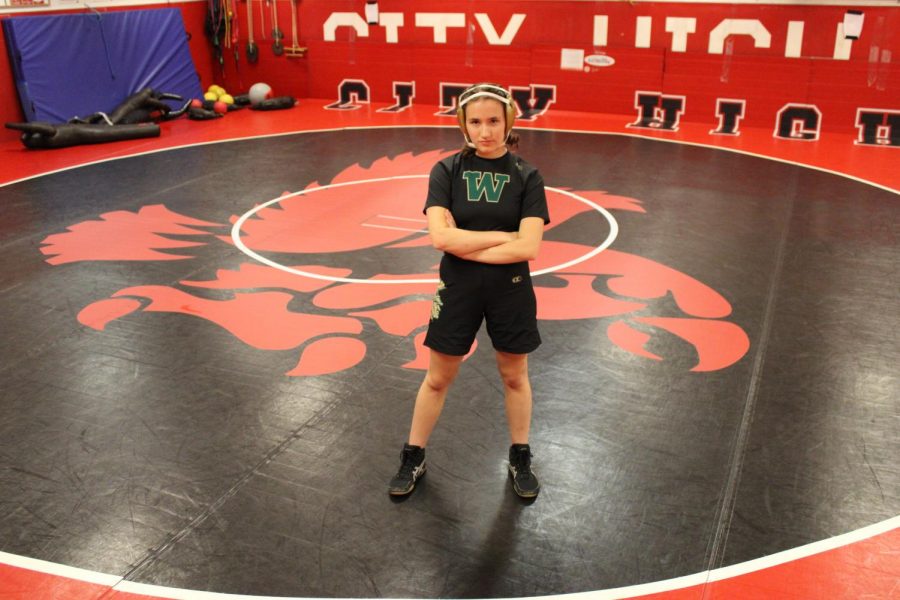 The shrill sound of a whistle filled the room, signaling the end of the match. Sophia Strathearn ‘21 released her opponent and rose to her feet. This was only her second official wrestling match, but she had won. She turned to the other girl and they shook hands, smiles on both of their faces.

“It definitely felt really good,” Sophia said. “[It was] this really cheesy moment with a lot of girls on my team on the sidelines, screaming my name and going wild.”

Sophia goes to City High, but is a member of the West High girls wrestling team because City only has boys wrestling. This is Sophia’s first year wrestling and she is the only girl who does not go to West High on her team.

“I just showed up at West High,” Sophia said about her first practice. “I actually didn’t even know where to go. I had to ask some random people, ‘Where’s the wrestling room?’”

When she found her way there, she discovered that the girls were welcoming and that she felt comfortable in the new environment.

“I felt a little intimidated [at first, thinking] ‘Man, these girls must be really tough because they’re doing wrestling, and I don’t know them,’ but I also wanted to get to know them better,” Sophia said.

Her mom, Sonja Strathearn, was taken aback at first when Sophia told her that she wanted to do wrestling.

“At first I was pretty surprised because I just hadn’t thought about girls [doing] wrestling. I had never heard of any women wrestlers,” Sonja said. “I guess I didn’t even really think about it.”

After going to one of Sophia’s wrestling meets, Sonja discovered that she enjoyed watching Sophia wrestle.

“It just looks really exciting,” Sonja said. “I hadn’t expected that it would look so technical. There are definite technical rules and technique[s]. It was more fun than I expected.”

Sophia has practices four days a week at West High, the high school across town. She also has other extracurriculars, such as choir, show choir, and theater, on top of that. Because of Sophia’s busy schedule, her mom was originally against her doing wrestling.

“It just seemed almost impossible to me, but [Sophia] was so persistent,” Sonja said. “She worked out a way that it could work out.”

Since Sophia doesn’t have her own car and only has a learner’s permit, her brother and parents have to drive her to and from practice. It takes her entire family’s commitment for her to continue wrestling.

“It’s actually really difficult because right after school, I have to rush over to West High because practice starts 15 minutes after school ends,” Sophia said. “Even if I left exactly at four o’clock I would barely make it.”

Sophia is typically 15 minutes late to practice but West Girls wrestling coach Justin Koethe realizes there is nothing she can do about it. Since practices typically start with running warm-ups and drills, the team tends to wait for Sophia to arrive. Drills are then followed by some sprints and practice time for new moves. If there is time at the end of practice, the girls do what they call live wrestling, or practice wrestling matches against each other.

“You use every muscle on your body,” Sophia said. “Wrestling is just a very all-over sport. It is intense.”

Throughout her season, Sophia thinks she has improved a lot and learned much more about the sport of wrestling. She has also started lifting to help her gain an advantage over her competitors.

“I’ve definitely really grown to like [wrestling],” Sophia said. “The moment before you wrestle is really nerve-racking and scary, but then while you’re actually wrestling, it’s just so [much] fun. It’s a game of trying to get on top and be in control.”

Both strength and technique play an important part of wrestling. Wrestlers learn certain pins and ways to grab their opponents, as well as different maneuvers to break out of their grasp.

“At the start of the season, I’d go watch a bunch of videos on YouTube and [certain moves] always seemed so crazy to me, but now I’m like, ‘Oh, I can do that,’” Sophia said.

Sophia’s eagerness to learn and dedication to her new sport are traits that have stood out to her coaches.

“She is a hard worker. She comes to practice and if I say jog or sprint or whatever it is, she is right there doing it,” Koethe said.

All the girls learned moves together at practice, and despite going to a different school, Sophia quickly bonded with the other girls on the team.

“We seem pretty crazy for trying out for this crazy sport thing that’s not usual for girls to do. I feel like we feel connected [through] that,” Sophia said.

Throughout the season, the team went to see movies for team bonding and stayed in hotels together, along with practicing and training.

“On day one they all came in strangers for the most part. [Now] it amazes me how close they actually are,” Koether said. “If you didn’t know it, you would have no idea Sophia wasn’t from West High.”

At competitions, Sophia wears the same black shirt with a green W and black shorts as the rest of the girls on the team.

“I think of myself as the Little Hawk in green,” Sophia said. “I really like the community that we have.”

Since she enjoys wrestling so much, Sophia encourages any girl who is interested to try it.

“I feel like anybody can do wrestling,” Sophia said. “All of our girls are just all so different. It’s just all a very individual [level]. You can have that potential, it’s just from there, you have to take it and work at it for yourself to be better than the other people of your weight.”

Sophia realizes that for some, girls wrestling is just too inconvenient if there is not a wrestling program close by.

“I think [wrestling] should be more common. There’s definitely an interest in it,” Sophia said. “I think a lot of girls think it could be fun but they just don’t have the option.”

Her coach thinks that girls should be able to have the opportunity to wrestle if they choose.

“I think every school should at least offer the opportunity [for girls wrestling],” Koether said. “I realize there’s not enough girls everywhere that want to do it, but I think if a lot of schools just asked their students, they would get a handful at almost every school.”

Despite this being the first year of the West High girls wrestling team, it placed fifth at the final tournament of the season. Formally known as the 2020 Iowa Wrestling Coaches and Officials Association Girls’ State Wrestling Tournament, it took place on January 24 and 25 at Waverly-Shell Rock High School. Sophia wrestled four matches, winning two of them despite being in the lower end of her weight group.

“I felt proud of myself,” Sophia said. “It was terrifying going into it, [even] giving myself a pep talk, but I ended up winning half of my matches, so I’m pretty proud of that.”

While Sophia is sad that the season is over, she is already looking forward to wrestling for West again next year.

“[Wrestling] has shown me that l can do things I wouldn’t have necessarily thought before that I could do,” she said.