This year the City High Boys wrestling team has had a slow start to the season due to many injuries, but that is changing with the end of the season 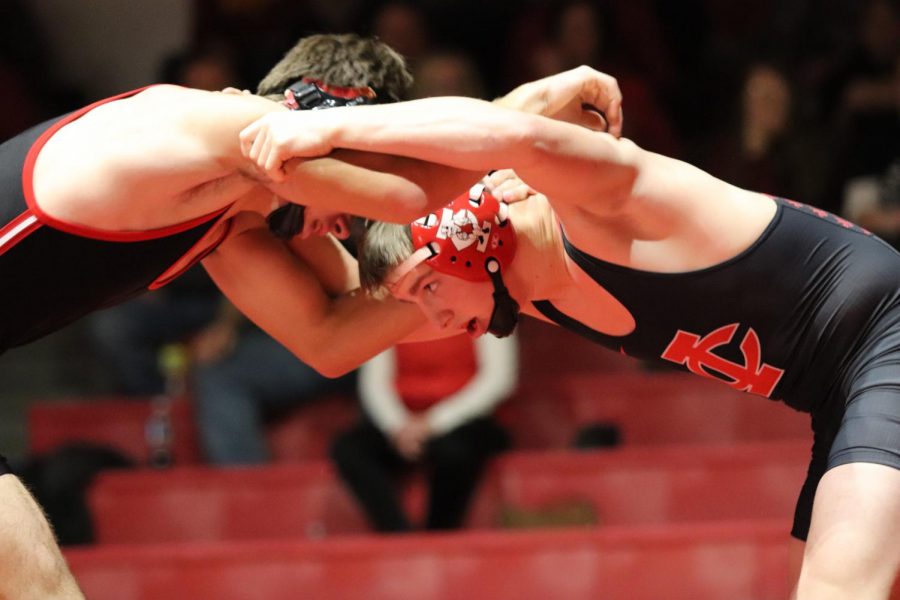 Gable Mitchell '22 struggling to get the upper-hand in a wrestling match.

The ferocity of the competition, the struggle to find the best weight group, and the bond of the team all play a part in wrestling. However, during the past two years, high numbers of injuries have also played a role in the sport for the City High boys wrestling team.

“Last year and this year we’ve dealt with more injuries than we ever had before,” head wrestling coach Cory Connell said. “It’s just been kind of weird trying to get everybody on the same page when so many people are on different pages health-wise.”

As the team has been unable to have the whole lineup competing at once, it has not been able to place as high as a team at tournaments or dual meets until its 49-28 win against West High at the Mississippi Valley Conference.

Avery Goodrich ‘22 is wrestling for the first time this year. He has not had any major injuries, but still feels the effects of the season.

“Like most sports, everyone’s a little banged up by this point,” Goodrich said. “When you go into any sport, you know the risk that you are taking. It really comes down to, ‘Why am I doing this?’ If you love the sport or what the sport can do for you then stuff like [injuries] is just another challenge.”

Since he has been injured in the past, Goodrich knows how hard dealing with an injury can be, but he also knows how to make the most of the season.

“I am just taking every opportunity to improve that I can,” Goodrich said. “Competition-wise, I am going to do the best I can and see where it takes me.”

While having lots of injured teammates can lower the morale of a team, Connell is trying to keep the athletes focused on improvement.

“It’s an individual sport as much as it is a team sport so I want them all to be team-oriented but they[‘ve] also got to understand they help the team the most by performing well,” Connell said. “To me, it’s always about just getting yourself ready to compete and do your best.”

As the end of the season and championship meets approach, Connell is expecting many wrestlers who have been training and competing part-time to fully recover. The district meet takes place on February 15 at West High, with the state meet the following week.

“It’s most important to be healthy and at our best wrestling at the end of the season,” Connell said. “I think we’re going up and peaking towards the right time of year and that’s what we’re always geared towards.”

Goodrich has learned a lot through his season of wrestling, including how to work through unpleasant situations and depend on oneself.

“Wrestling, like many other sports, is a process,” Goodrich said. “You have to compete and work hard in every situation and every drill during practice, because when you’re one-on-one out on the mat, the only one who can do anything to help you is you.”