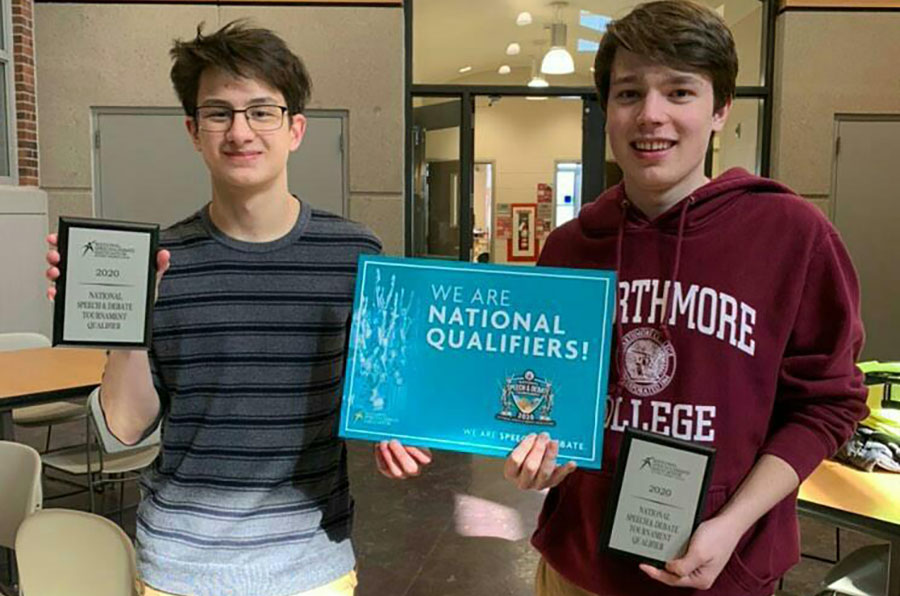 Debators Ellis Chen '20 and Simon Weiss '20 pose with their trophies.

City High debate has had great success so far this year and behind senior team captains Simon Weiss ‘20 and Ellis Chen ‘20, the team is having the most success City High debaters have had in years.

“The season is going extremely well,” said Weiss. “We are tied for first on the bid list, which counts the number of commendations you get for getting far enough in large tournaments.”

Those ‘bids’ are for qualifying to the Tournament of Champions, commonly referred to as the TOC. It’s the biggest, most prestigious high school debate tournament in the country. Teams around the country are fighting to do well enough in big tournaments to be able to qualify. A team needs two bids to qualify. Chen and Weiss have six–but they aren’t done yet.

“We’ve accomplished most of our goals and just won a very hard tournament called the Blake tournament. I think very few people saw that coming, but we managed to pull it off,” said Chen. “Generally, we’ve kept our momentum up and are still working hard.”

But as they near the TOC in April, Weiss and Chen are focused on continuing to improve despite their success.

“[We’re] working hard to keep up with all the new stuff that’s being read at tournaments and we’re practicing hard to hone our skills at debate to keep winning,” said Weiss.

Both members of the team put in hours of work every week doing everything from researching current events to practicing speaking quickly so that they can read as much evidence in as short a time as they can.

“Simon helps us succeed because he helps point out when my ideas are stupid or need to be refined, and he also comes up with ideas himself that we can work to improve,” said Chen. “He does a lot of research, just like me, so that we can stay on top of the things we need to stay on top of.”

With their hard work, talent, and teamwork, Chen and Weiss believe they can have success against the best debate teams the country has to offer.

“We’re hoping to make it to the elimination rounds at the hardest national tournament we’re going to, the Tournament of Champions,” said Chen. “If we work hard, I think we can do it, but anything can happen there.”