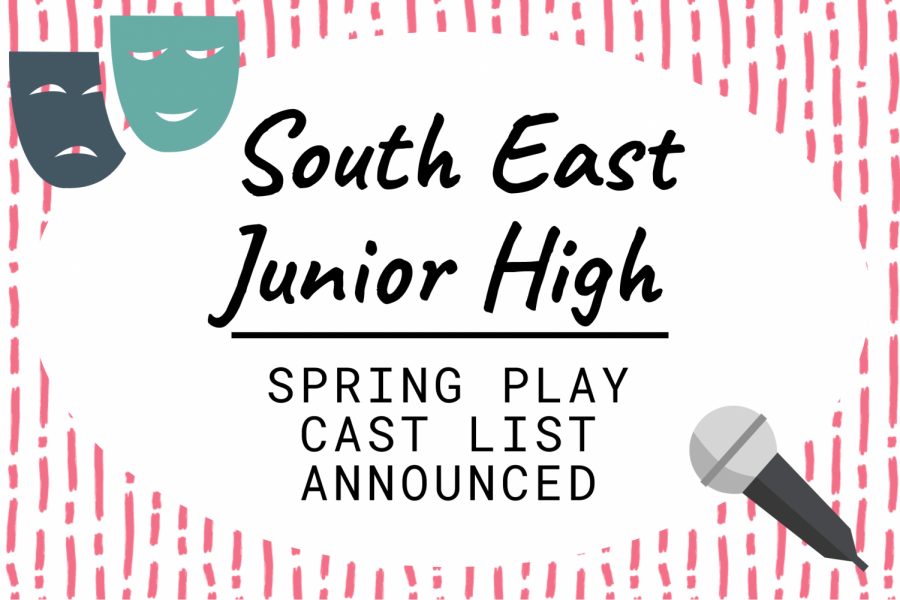 After two trimesters of not having plans for a school production finalized, South East Junior High School drama students were delighted to hear the announcement of tryouts for a spring play. “The Internet is Distract–Oh Look, a Kitten!”, a one-act comedy directed by Meg Tisinger, will feature a small cast of seventh and eighth graders acting out the story of Micah, a teenager who is too distracted by the wonders of the Internet to finish her school project on The Great Gatsby.

“A lot of us were really disappointed because we were expecting a show this year, and they said they weren’t gonna do it,” Ethan Hill ’24, cast in the role of Taylor, said. “The director’s nice, and I think she’s gonna be great.”

Middle school drama productions can serve as a student’s introduction to theatre entirely, but for some members of the cast, like Hill, it is a continuation of an already-established career in drama. “The Internet is Distract–Oh Look, a Kitten!” will be Hill’s second South East show and eleventh dramatic production overall. Last year, he starred as Sheriff Wayne John in South East’s production of “The Wild, Wild, Wildest West.”

“South East plays are a bit more chaotic [than community theatre], but you get to spend more time with your friends and you know the cast more and are a bit closer with everybody,” Hill said. “I have more experience now, so I know what to expect. I get to do the show with a new perspective… You meet a lot of good people, you have a lot of fun times, and you make a lot of good memories.”

Prior to any COVID-19 related postponements, the play was scheduled to perform in May. There are no updates to the fate of the production at this time, but practice schedules will be postponed until April 13th following the policy adopted by the ICCSD.