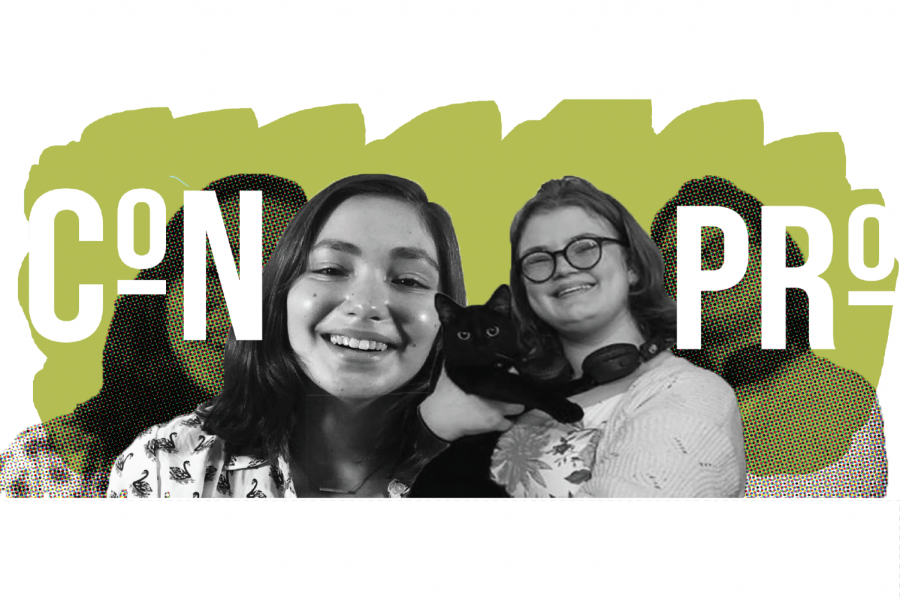 Jesse Hausknecht-Brown ‘21 and Adalie Burton ‘23 go head to head about whether the voting age should be lowered. (Haileigh Steffen)

Jesse Hausknecht-Brown ‘21 and Adalie Burton ‘23 go head to head about whether the voting age should be lowered.

Democracy in America has long since relied upon the votes of citizens to determine leadership and representation. A responsibility such as this is clearly not the kind of thing to grant recklessly. However, there comes a time when things must change. During the 2016 presidential election, generations voted far more frequently the older they were. When older generations are disproportionately represented amongst voter turnouts, those who will be affected by changes in the country the most are overlooked. This sparked outrage amongst 16- and 17-year-olds who could not vote, as they had yet to reach the age of 18. They were incredibly upset to have been let down by the adults they trusted.

The results of the election were revealed to me the morning after, as I had attempted to stay up late enough to see them myself, but failed miserably. At first, I honestly thought I was being lied to. It took quite a bit of insistence from my parents and several rounds of intensive internet scouring to truly believe what was happening. As we came to understand the news, a form of disbelief seemed to take root in myself and my peers. This was quickly replaced with anger; I was only 11 at the time, but a quiet form of rage seemed to have gotten under my skin. The night before, I had no trouble falling asleep; I was entirely sure that I’d wake up the next morning and nothing would have really changed. I figured the adults would take care of it, and that I could go on with my rigorous training in the addition and multiplication of fractions.

It became clear to me in the months following the election that something needed to change. Here were people who wanted to vote and met every necessary requirement to vote other than their age. They are American citizens who had not been convicted of felonies and met every other one of their states’ requirements. Had they been able to cast them, their votes could have turned the election on its head. With a broader spectrum of voices being heard, the results of the election could have better served the ideals of those who symbolize the future of the country.

Some insist that adulthood should correspond with the right to vote. While this makes some sense, it also implies that being an adult is an automatic occurrence at 18. Realistically, legal adulthood in no way signifies one’s inherent maturity.

Giving anyone the right to vote is a gamble, whether they be 16 or 60. No matter how well you know someone, you can never be sure if they’ll make a good decision. To argue that someone will or will not do the right thing is not only incredibly presumptuous, it is also perfectly likely to be incorrect.

Many argue that 16-year-olds are not mature enough to make important decisions such as these, that they would make rash decisions. However, an argument such as this ignores the reality that anyone can make good and bad decisions. Some people at the age of 16 are taking care of families, making sure their siblings get to school on time, carrying multiple jobs. Some are not. Some adults are disregarding their responsibilities in favor of having fun and relaxing. Again, some are not. One’s age does not guarantee their maturity or ensure their recklessness.

People are worth more than their age; teenagers may have the same experiences as anyone else might. They worry about their future and deserve to have a say in it that’s worth a little more than the mundane little choices they make every day or how hard they try on an exam. Many sophomores and juniors are planning their academic pursuits. They’re taking and re-taking the SAT to get a score they’re proud of, researching degrees and career paths, and fantasizing about white-picket fences wrapped around houses in the suburbs. If they’re lucky, they’ll be able to control one or two of these things. Maybe they’ll get into their top college, find the city apartment of their dreams, or land an important internship. Most won’t be able to control many aspects of their lives at this point. There are simply too many outside factors, such as the decisions that those around them make while voting. If the future of any country lies in the hands of a group of teenagers, I can only hope they get a say in what happens to it beforehand.

In the past couple of decades, politicians and activists alike have advocated for lowering the voting age to 16 or possibly younger. Following the 2016 presidential election, voices from the left calling for the voting age to be lowered grew louder. I, contrary to what many of my progressive friends believe, do not think that the voting age should be lowered.

To lower the voting age would be to rework the entire idea of when one becomes a legal adult. Turning 18 marks adulthood for Americans; at 18 one is allowed to vote, enlist in the military, serve on a jury, and more. It would not make sense to let 16-year-olds vote when they are unable to do any of the other things that make them an adult.

More importantly, many teenagers graduate from high school around 18 and move out of their parents’ house to go to college or join the workforce. Many teenagers’ political beliefs are heavily influenced by their parents’ beliefs. According to a study done in the British Journal of Political Science, children who grow up in households where political issues are discussed often are more likely to adopt different political views when they leave home. This is because they are used to talking about politics and will continue to do so which leads them to be exposed to different viewpoints and opinions.

Teenagers living in a city or state whose citizens align themselves on the “edge” of the political spectrum may be heavily influenced by their neighbors’ political beliefs, especially if their parents tell them that these beliefs are “correct.” After leaving the city they grew up in, or simply leaving their parents’ house, an 18-year-old will make new friends, live with new people, and find a new community to engage with. These new people may or may not align themselves with the opposite side of the political spectrum than the 18-year-old does, but either way, they will expose them to different viewpoints and ideas which may shape the way they think about politics.

This presidential election cycle has reminded me why I don’t want other, fellow 16-year-old democrats and progressives to be able to vote. After Bernie Sanders dropped out and left Joe Biden as the Democratic presidential nominee, social media and classrooms alike were filled with discussion about whether Sanders’ supporters should or should not vote in November. To be fair, there were multiple conversations about this going on: to vote or not to vote in the general election, whether or not to write Sanders’ name in on the primary ballot and if his name should be written in on the ballot in November. I was truly appalled that there were so many progressive voters out there who were seriously considering not voting at all in the general election because they hated Biden so much. Because of this, I tried to talk to as many people as I could about it. I know that this only reflects what I have encountered, but based on conversations that I had with peers and from what I’ve seen on social media, the vast majority of people claiming to be unable to vote for Biden are in between the ages of 16 and 22. What’s more is that these Sanders supporters are using dangerous rhetoric when talking about the differences between Biden and Trump, or in their opinion, the lack thereof. Now, I hate to be the one that says that 16-year-olds do not know what’s best for them, but maturity increases with age, and naivety decreases.

One argument is that if the voting age was lowered, there would be a large turnout of teenage voters in elections. Sadly, only 12.5 percent of 18-year-olds participated in the 2014 midterm election. It is likely that the vast majority of the 16 and 17-year-olds with the newly gained right to vote would not use it. At the end of the day, I believe that 16-year-olds are mature enough to make their own decisions, but would be too naive and easily influenced by their parents to make well thought out political decisions that they will not regret.