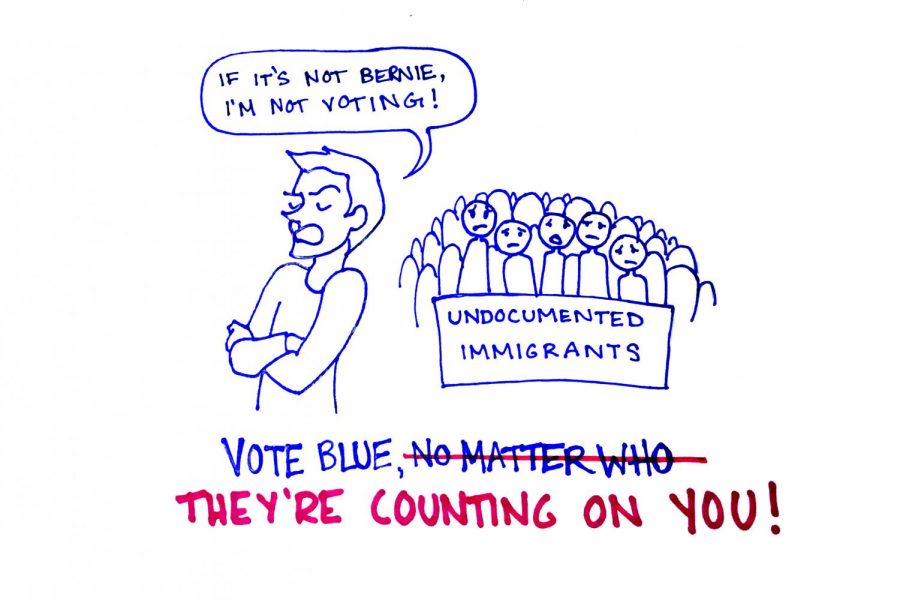 Not long ago, the world watched as 12 Democratic presidential candidates gathered in Westerville, Ohio for the largest ever democratic debate. Now democrats are left with one candidate, the safe choice, the predator: Joe Biden. This is Biden’s third time running for president; the first time was in 1988 when he had to drop out after it was revealed that he plagiarized a speech. Now, he has become the democratic nominee with a rape allegation against him. A quick Google search will lead to many videos of Biden displaying creepy behavior towards young girls and his own female family members. Recently, I have heard many Sanders supporters talking about how they refuse to vote for Biden and plan on writing in Sanders’ name on the ballot.

Now, what people need to understand is the difference between writing Sanders’ name in on a primary ballot, versus the general election ballot. In many states, Sanders’ name will actually be on the primary ballot. Sanders enthusiasts want enough people to vote for him in the primary, so he ends up with the nomination instead of Biden. This could happen, even though Sanders is not officially in the race. However, I’ve heard many people saying that they will not vote at all in the general election because they do not want to support Biden. What’s more, is that if voters stay home on election night, they will not be able to vote in all the other elections on the ballot, which will include progressive candidates running for seats in Congress. This is an extremely dangerous idea.

There are so many things wrong with this decision; first and foremost, those who are choosing not to vote are taking their right to vote for granted. If you don’t want to vote for yourself, vote for those who can not: the undocumented immigrants and prisoners living in this country. Of the democratic candidates in the 2020 race, Sanders was the only one to support giving prisoners the right to vote while they were still serving time. Yes, the people supporting the restoration of voting rights for ex-felons and those currently serving time are the same people who are refusing to vote. The hashtag #RepealThe19th was trending on Twitter back in October of 2016 after a poll showed that if only men voted, Donald Trump would win and if only women voted, he would lose. This hashtag along with similar sexist statements concerning women’s right to vote has been resurfacing on social media in the past couple of days, specifically in alt-right groups on Twitter and TikTok. In America, voting is the main way that citizens can contribute to the government and is essential for our democracy to work.

The loudest argument for not voting is that Biden is so terrible that he can not be voted for. Politics will almost always be about the lesser of two evils, no candidate will ever be perfect, but one candidate will always be better. “Vote blue no matter who” is a dangerous idea that keeps the institutional democrats in power, which is what many progressives and Sanders supporters, including myself, are fighting against. However, voting for Biden is not “voting blue no matter who.” Voting for Biden is simply recognizing that more people will be hurt under a Trump administration than under Biden’s. Not voting or writing in Sanders’ name in the general election is a vote for Trump, which means that you do not recognize that Trump is worse than Biden.

What is most frustrating is hearing how many of the white, cishet, economically privileged men who are choosing not to vote will not listen to others talk about the reasons that they themselves need to vote for Biden. For example, in three years, under Trump’s administration, women may or may not be able to get abortions and transgender people may or may not be able to access healthcare. In the past, Biden has done terrible things that have been harmful to marginalized communities, and as president, he may not make a lot of progress for people in those communities. Be that as it may, he will not take us backward on some of the issues that I fear Trump will. Will Biden do much to help the LGBTQ+ community? Probably not. Will he ban gay marriage? No. Will Trump? Who knows. Ask those questions with almost any issue and the outcome will be the same: Biden will not make it much better or much worse, but Trump will make it worse. On a personal level, many of your friends and family probably have reasons why they personally cannot afford to have another four years of Trump. Take a look around City High, many students’ lives or livelihoods depend on how you cast your vote in November.