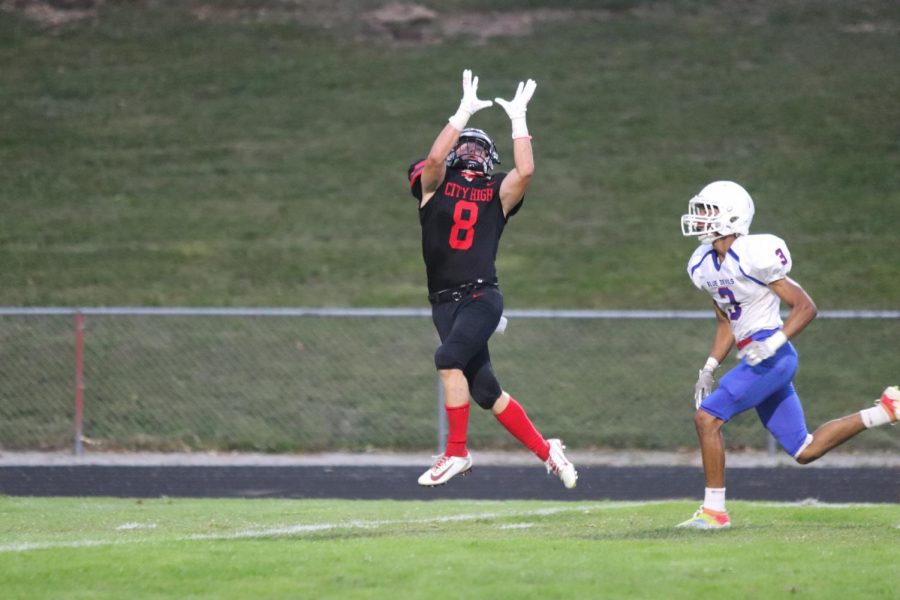 Zoom workouts, players distanced and masked when in person has become the new normal for athletes. This year, many activities were put on hold or canceled. Not knowing what the future would hold, the football team took their shot at a season, taking precautions along the way. On Friday, August 28, the City High football teams had their first games of the season.
The freshman-sophomore team won against the Davenport Central Blue Devils with a score of 46-0. City took the lead in the second quarter leading 8-0. By halftime, City was up by 22. In the third quarter, City #6 Carsen Newton ‘24 gained back around 30 yards through an interception, and City High earned an unsportsman-like conduct penalty after Newton was aggressive towards some Davenport Central players.

With the high, and continuously rising, positive tests for Coronavirus in Johnson County, no spectators were allowed on campus. However, that did not stop around 20 parents and fans to cheer from outside the campus fence to support their Little Hawks. Also in attendance were the City High Cheerleaders, a smaller pepband, and the Dance Team. The cheerleaders cheered throughout both games, the Pep Band played during the first half of the varsity game, and the Dance Team had their usual halftime performance at the varsity game. All City High groups socially distanced and wore masks.

The varsity game started at 7:20 p.m. with the team running under the balloon arch and onto the field in their new blackout uniforms consisting of black jerseys with numbers in red. Coming into the game with the past three seasons having 2-7 wins to losses, City High was ranked 23 and Davenport Central ranked 32 in the Iowa Division 4A Rankings.

City #8 Gable Mitchell ‘22 scored the first points of the game in the first quarter via a 50 yard throw from quarterback #3 Raphael Hamilton ‘21. This soon became a seven point lead after a good kick from #1 Kongolo Mwenemkamba ‘22. At the half, City held the lead with 21-7 after Davenport Central called a timeout with four seconds left in the half. By the fourth quarter, City still held the lead and finished out the game with a win of 35-14 giving the Little Hawks their first win of the season, opening the year strong.