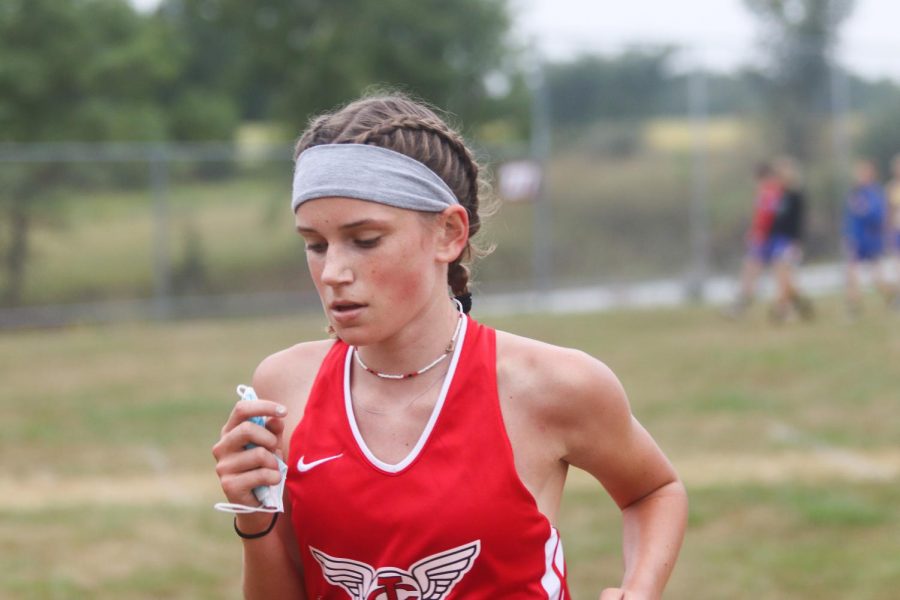 Erin Anderson '23 in the girls varsity race in her second mile.

The night started with the JV races, first girls, then boys. The girls team started out strong, Lucy Corbin ‘22 taking the lead followed by Tatum Frazier ‘22, Ava Reynolds ‘23, and Greta Boerner ‘24. After the first mile, Corbin, who was still leading, had to drop out due to an ongoing injury. That left Frazier to lead the team into the finish. Frazier won the race with a time of 22.22, just over a minute ahead of the second place finisher Boerner, who came in at 23.20. She was followed by Jordan Sekafetz ‘21, Sophie Stumbo ‘23, Annika Veit ‘22, and Eva Reynolds ‘23. They were all scorers contributing to the team score of 15 beating Washington by 44 points and winning them the race.

“I think the girls did a great job competing at such a small meet. Racing against your teammates is some of the best competition because you want to push yourself even more to beat them,” said Veit.

The boys JV race started out with Nollen Abriam ‘22 taking and holding the lead for about the first mile. He was closely followed by Ayman Noreldan ‘23 and Joe Fischer ‘21. In the end, Noreldain won the race with a time of 20.05. Phil MacGillivray ‘23 came in third with a time of 20.15 scoring 3 points for City High. Overall, the JV boys scored 19 points beating Cedar Rapids Jefferson who came in with 39 points.

The varsity races followed the JV races, beginning at six p.m. for girls and 6:30 p.m. for boys. The girls team had a strong start with Iris Wedemeyer ‘23 leading out of the box like normal. In the first mile, Lilly Reynolds ‘21 and Rowan Boulter ‘22 were neck and neck in first. In the second mile, Boulter had taken the lead with Reynolds not far behind. All seven of the City High varsity girls placed in the top seven, with Avery Schultes ‘23 coming in seventh about 100 meters ahead of the first girl from another team.

“I’m so happy with how the team raced on Tuesday. I think I raced pretty well for it being the first meet. There were lots of improvements/time drops from last year which was awesome to see later in the results,” said Veit.

The City boys ran their alternate varsity team in an effort to save the official varsity for their meet at Pleasant Valley on Saturday, September 5. The first runner for City, Juma Amisi ‘22 ended in sixth place with a time of 19.28. The team overall did not get out in front and were stuck in the middle of the pack throughout the race. Jonas Ackerman ‘23 ended in ninth with a time of 19.39. He was followed by Matt Shaeckenbach ‘23, Evan McElory ‘21, Whit Jury ‘23, Rhys Zawojewski ‘23, and Isaac Miller ‘23. All came in in the top 30 of the race earning them 52 points, and second place. They used the alternate varsity tactic last year at this meet as well, with about the same outcome both times.

“I’m really happy with what we’ve accomplished at Hillcrest. Although we did get second in varsity, I still think we ran some outstanding races out there,” said Jury. “This was my first varsity race and it pushed me like no other race has before. My mouth was like a desert and I felt like collapsing into a pile of dust at the end, but overall, it was an exhilarating race.”