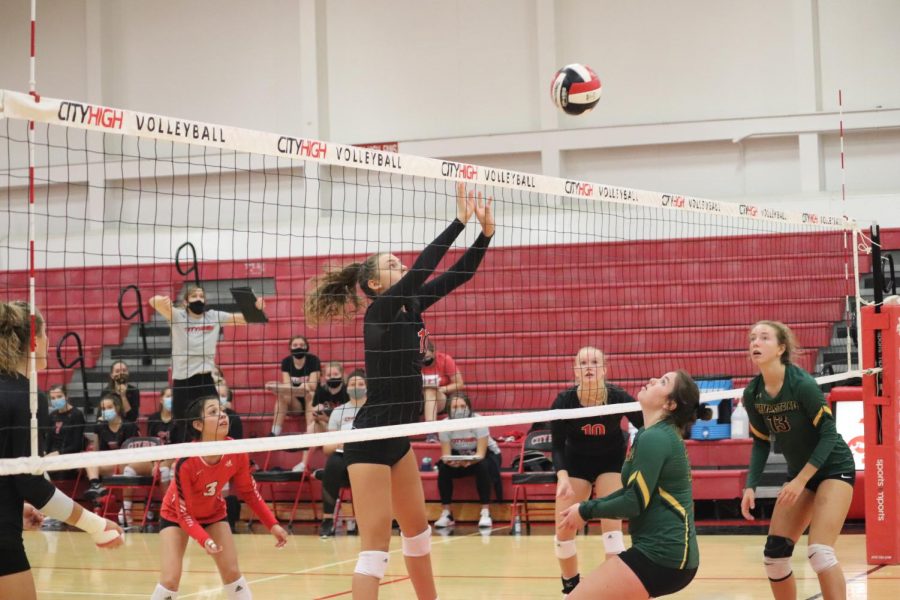 Two hours into the game, it was close. Both teams would gain a point lead, only to lose it again as the other team caught up. Every point scored caused a yell of triumph from the benefiting team and a silent groan from the other. In the end, the team from Dubuque Hempstead managed a three point lead, winning the tie breaking set with a score of 12-15.

“That was a really good game,” Sara Cassady ‘22 said. “We kinda had a rough start to the season but to see us come together and play as a team was really great.”

Coming into Saturday’s game, Dubuque Senior had an undefeated season streak of five wins. City High, on the other hand, had won one out of four games.

“I was super happy with the way it turned out,” Cassady said. “Well, obviously, a win would have been better but it’s still a good way to end.”

As a safety precaution, coaches, officials, and benched players wore face masks. Spectators were not allowed at the game.

“The atmosphere was still really loud and everyone was cheering each other on. Even though we can’t have fans, we always know that our bench and everyone at home is supporting us,” Cassady said.

The City High varsity girl’s volleyball team has its next game against Cedar Rapids Washington on Monday, September 7. However, once online school school starts the following Tuesday, all in-person extracurricular activities will be suspended.

“We obviously want to have this full season play out but we got to work with what we can,” Cassady said. “[We need to] keep working to make sure we play the best we can in the time we have left.”