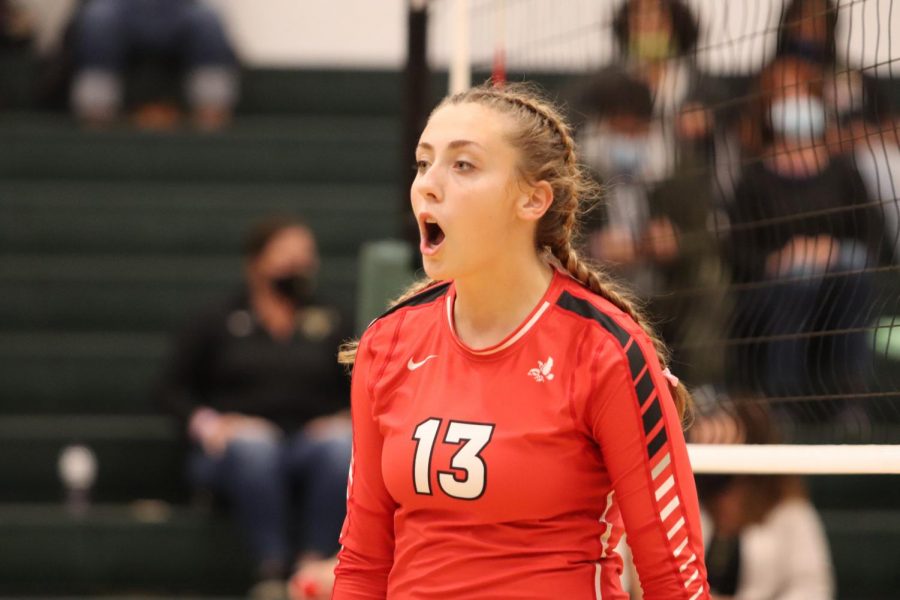 The City High varsity volleyball team has dedicated their entire fall 2020 season to Emma Nugent ‘21, after her tragic passing this past summer.

“It got to be really tough and we all leaned on each other for support,” Makayla Ribble ‘20 said.

The team has created reminders of Nugent all around them.

“We have her jersey out every game sitting on the first chair, home and away. Our shirts also have a #14 on them on the back,” Joslyn Becker ’21 said. “Just little things like that so that she’ll always be a part of our team.”

Becker had bracelets made with “Emma Nugent” and “We play for 14” on them, which she gave to her teammates.

“After coming together we touch our hearts then point up,” Ribble said. “In the national anthem I squeeze my right hand because she stood next to my right during the anthem.”

Besides the loss of Nugent, the City High volleyball team is facing other challenges, such as not having many returning varsity players and the COVID pandemic.

“We started to take it day by day and not focus on tomorrow because we didn’t know what tomorrow could bring us,” Ribble said.

Five games into the season, the City High volleyball team had to pause their season as school went online. However, that did not stop the team from keeping in touch or staying active. The team had zooms a couple times a week to stay in touch  and players were sent workouts to do on their own.

“Most of us found a way to stay active, whether that’s finding a gym to get touches [or practicing at home],” Ribble said.

So far this season, the team has won seven out of their first 17 matches and tournaments, including a win against the West High Trojans on October 1.

“I think we just really had the mentality of leaving it all on the floor every single day, whether that was at practice or a game. We really focused on controlling what we can control because a lot of things are out of our hands,” Becker said.