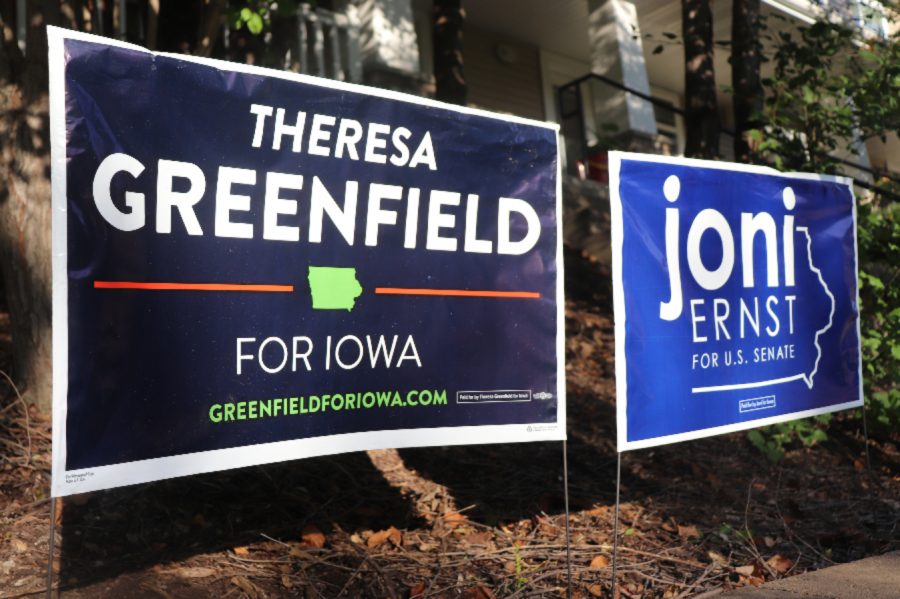 Signs for the Republican and Democratic Nominee for Iowa Senate.

As November 3 approaches, political campaigns are at their highest momentum and intensity. Because of a worldwide pandemic that is unceasing, organizing and encouraging voters to use their voice looks different than years past. The digital world has become a reality for so many, with virtual workspaces becoming the norm. While usual direct voter contact includes door knocking, in-person dinners, and events, campaigns have had to adjust due to the public health crisis.

“Our campaign is continuing to talk to voters across Iowa, with volunteers in every corner of the state. Phone banking and texting around the clock, and are encouraging Iowans to vote by mail. Thanks to a major boost in volunteers, just this past weekend, we broke our campaign’s record for phone calls and texts to voters,” Theresa Greenfield, who is running for the U.S. Senate to represent Iowa, said.

Though political campaigns look different than prior years, it doesn’t necessarily mean they require less effort. Campaign staffers and organizers have found ways to replace campaign stand-bys, such as town halls and community events, with virtual alternatives to align with the CDC’s safety recommendations.

“It’s different, not going up to people’s doors, and not having those kinds of conversations, but on the other hand, I’ve had some great conversations on the phone,” Shawn Harmsen, a volunteer for Battleground Iowa, said.

Battleground Iowa works to elect Joe Biden, Teresa Greenfield, and Democrats up and down the ballot.

“Now there are massive Zoom trainings [for volunteers], where otherwise you would go to someone’s house or garage, and sit there in a face to face training. There are all the same elements, they’re just being delivered in a slightly different way,” Harmsen said.

An unexpected advantage of this new way of conducting campaign work is the ability to engage non-local volunteers from various states. Now, it’s much easier for someone anywhere in the country to join a Zoom and make calls from their house, instead of having to physically knock doors within a specific turf area.

“While I’d certainly rather be out shaking hands, I’m proud that I’ve done more than 250 in-person and virtual campaign events. I continue to hear from Iowans about the challenges they’re facing and the issues that matter most to them while prioritizing the health and safety of everyone involved. We’re going to keep traveling the state, keeping our in-person events within public health guidelines, and meeting and answering questions from Iowans through our virtual events,” Greenfield said.

Due to COVID-19 restrictions, campaigns are creating new events to replace former gatherings. Joni Ernst, Greenfield’s competitor, is running for re-election to the U.S. Senate to represent Iowa. Ernst was elected in 2014, becoming the first woman from Iowa elected to the Senate. Ernst has set up a new event for the year, “Joni’s Ride Across Iowa.” The two-day motorcycle event includes six stops across the state, and opportunities to meet with Ernst herself.

“Taking the proper COVID-19 precautions, Joni Ernst has still been able to complete her 6th 99 County Tour, making stops in every county, as well as safely visiting with folks on the campaign trail. Joni believes it’s critical for our elected officials to hear directly from Iowans and for all Iowans, from every part of our state, to have their voices heard,” Melissa Deatsch, Press Secretary of the Team Joni campaign, said.

From the presidential race to state-level races, all elections will take place on November third. With less than five weeks until the elections, campaigns are in full swing.

“In the Senate, [Ernst] is a tireless advocate for farmers, veterans, and working families, and a fighter for Iowa jobs. We are energized by the strong grassroots energy and momentum that continues to fuel our campaign,” Deatsch said.

October 24 is the voter registration deadline. Voters can request an Absentee Ballot Request Form that must be submitted and received by County Auditors by October 24. Absentee ballots will begin to be sent out on October 5 and can be returned by mail, or dropped off early to County Auditors before November 3. Voters may also submit a ballot, in-person on voting day. Absentee ballots can be tracked, and more information found on the Iowa Secretary of State website.

“Things certainly look different for our campaign right now, but that doesn’t mean we’re standing still, and from now through November 3, we’ll keep fighting in every corner of the state to earn every last vote,” Greenfield said.