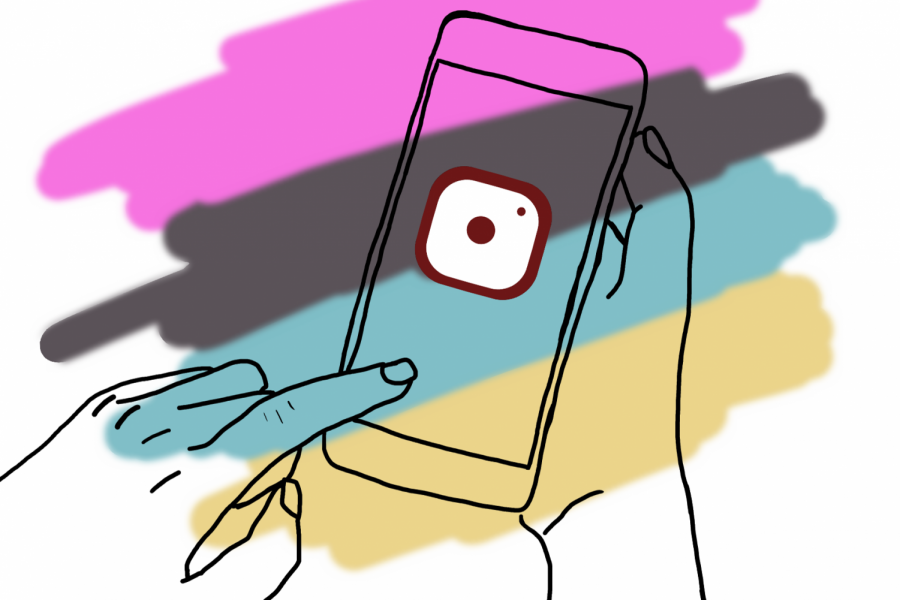 Students in the Iowa City Community School District have created Instagram accounts to call out discrimination within the district.

For months, well-designed, color-coordinated, patterned squares flooded City High students’ Instagram feeds; however, the content of these boxes was less pleasing than their aesthetic exterior. All under similar handles, these Instagram accounts, most created in late July and early August, call out discrimination faced by students and teachers in the Iowa City Community School District (ICCSD).

“I started the @blackaticcsd page after seeing Ivy League universities create similar social media accounts,” Taylor*, a high school student in the ICCSD, said. “I wanted it to be a safe space for students of color to share their stories… I don’t consider myself an activist— I’m just doing what should have been done by the district.”

Within a week of the account being created, @blackaticcsd had posted nearly 50 submissions and received many more. Soon after, the @lgtbaticcsd and @girlsaticcsd accounts were created, first posting on July 22 and 30, respectively.

“I saw the other two accounts, @lgbtaticcsd and @blackaticcsd, and I felt like we needed a place for girls to report sexism and misogyny, but it kind of turned into an account to report sexual harassment,” Violet Whiting ‘25, an eighth-grader at South East Junior High and the original creator of the @girlsaticcsd account, said.

Astrid Carlson ‘24, who identifies as non-binary, describes their friend reaching out to them about creating the @lgbtaticcsd account.

“As an LGBTQ person in the ICCSD, I have personally dealt with harassment and bullying because of that and I felt that it was important for us to have a space where we could share those stories and bring awareness to the fact that this is still happening, even in a school district that is slightly more liberal,” Carlson said.

They’re one of the six owners of the @lgbtaticcsd account and described the six of them getting together as a group to create the account.

Megan Fields ‘21 underestimated how many incidents of harassment or discrimination would show up on the accounts and was surprised by the stories that she saw, but is glad the accounts were created.

“My first reaction to the ICCSD accounts was really positive because I thought it was a really good idea for people who feel like they can’t or don’t have a voice in the district,” Fields said. “I thought it was really important because I know in my experience as a young woman who’s grown up in this district, that there have definitely been many cases where women don’t get the chance to speak of their experiences.”

Taylor describes how they quickly noticed similar things in the submissions they received: the same teachers, the same experiences, and the same problems.

“I have received some horrible stories, but none of which were surprising; many people comment on the shock they had reading it, these tend to be white students and teachers, whilst others comment about experiencing or seeing a similar instance happen to them,” Taylor said.

“After talking with the other accounts I realized that many of the teachers being named for racist actions are also showing up in stories of sexism, homophobia, or unequal disciplinary actions,” Taylor said. “Whenever there is a story with a teacher, I always keep the name in so that other students could comment if they have something similar; usually there are multiple similar stories from the same teachers.”

However, Taylor does blur out the names of students who come up in submissions because they are not employees of the school district.

“It is tougher for the district to take action against a student, whether that student has graduated, left the school, already been punished, in case the story isn’t true, etc., so student names are always blurred out, for that student’s safety, and also due to the lack of action the district is allowed to enact, or they will enact,” Taylor said.

City High principal John Bacon explained how if a student reports an incident that occurred with a specific teacher, then there would be an investigation.

“I have not read transcripts of everything that was posted on [the Instagram accounts] so I’m not aware of a great deal of specifics,” Bacon said. “I would tell you in general, that if there was a specific concern brought that warranted an investigation, we would investigate. And there’s a procedure for that in the school district.”

Moreover, Bacon describes two equity committees at City High: one, a staff equity team that met weekly during the spring and the first part of the summer, and the other, a student diversity, equity, and inclusion team.

“[We want to] really invest in that student equity team and make sure that the student body knows about that group,” Bacon said.

Whiting would like to see the district take more action and do more to help students who come forward with stories of misogyny.

“Obviously there [are] so many stories; these are just the people who are brave enough to share their story, and if there’s all this obviously going around and in our community, we need to take action because most of the stories were saying that they were just asked to apologize or just forced to apologize,” Whiting said.

Carlson and the other owners of the @lgbtaticcsd account have been talking to other students who have faced homophobia or transphobia at school to gather information before bringing specific complaints to the district.

“For ones [with] specific teachers we are collecting information and records, especially video records, and compiling information so that we can then bring it to the district [because] we want to have a strong case before we go to rush in there,” Carlson said.

After facing discrimination at South East, Carlson is hopeful that the attitudes in the school district towards the LGTBQ+ community will change in the future. When talking about their experience at South East as a non-binary person, Carlson described it as “not great” citing instances when the administration would refuse to put students’ correct names and pronouns in PowerSchool.

“Some teachers would go as far as intentionally using the given names as much as possible, which was really not cool. In the halls, the hall monitors were often more likely to stop LGBTQ couples for public displays of affection than they ever were for straight couples,” Carlson said.

To combat these issues, another plan that the City High administration is working on is a way to incorporate students in staff professional development.

“We want to take half of our in-service days and designate them for student-led professional development so we can hear directly from students,” Bacon said.

There will be a system where students can make a proposal about what they want to present and a staff equity team will choose which proposal they want to hear more about in a staff professional development meeting.

“Then we would actually have student-led professional development so we can just hear directly from students,” Bacon said. “And that was one example, and there are many other steps, other steps included like special lessons that the teacher teams were working on to address racial equity issues, to address treating each other with respect, and just all of those types of things that we’re building some lessons that would fit into our advisory structure that we’re going to be delivered during advisory.”

Matt Degner, the interim superintendent, explained that the work they need to do is twofold; they need to create a system where discrimination doesn’t occur, but when incidents do happen, students and staff know how to handle them.

“That’s where we need own some responsibility,” Degner said. “They haven’t felt like things have changed or when they shared those stories before, that nothings different or nothing’s changed. We need to reflect as a system about why that’s occurring and what we can do to improve on that.”

Additionally, the owners of these accounts have faced backlash on social media.

“One day, over the span of five or so hours, I received about a hundred submissions. Most, if not all, were from one person. A troll. Some were racist slurs and others were pushing his political ideologies,” Taylor said.

Whiting has had to delete sexist comments and block trolls from seeing the @girlsaticcsd account. Carlson described one friend group trolling the @lgbtaticcsd account, submitting fake stories, and harassing one of the other admins of the accounts.

Other accounts also surfaced, some positive, like @mentalhealthaticcsd and @latinosaticcsd, and some that seemed to be troll accounts, like @boysaticcsd and @conservativesaticcsd.

“I enjoyed seeing the other aticcsd accounts being started: the lgbtaticcsd, girlsaticcsd, and latinosaticcsd as well as the mental health and bullying accounts. Other accounts such as the boysaticcsd and conservativesaticcsd, not as much, especially considering they don’t post,” Taylor said.

At the end of the day, the owners of all of these accounts want to see the school district take action to prevent discrimination in the furture.

“[We want] to talk [to the school board] about discrimination and incidents that really prove that there is serious discrimination going on in the school discrict, because administration has a way of twisting themselves around it and pretending that it’s not really happening,” Carlson said. “We want to make sure that that can happen because change needs to happen.”