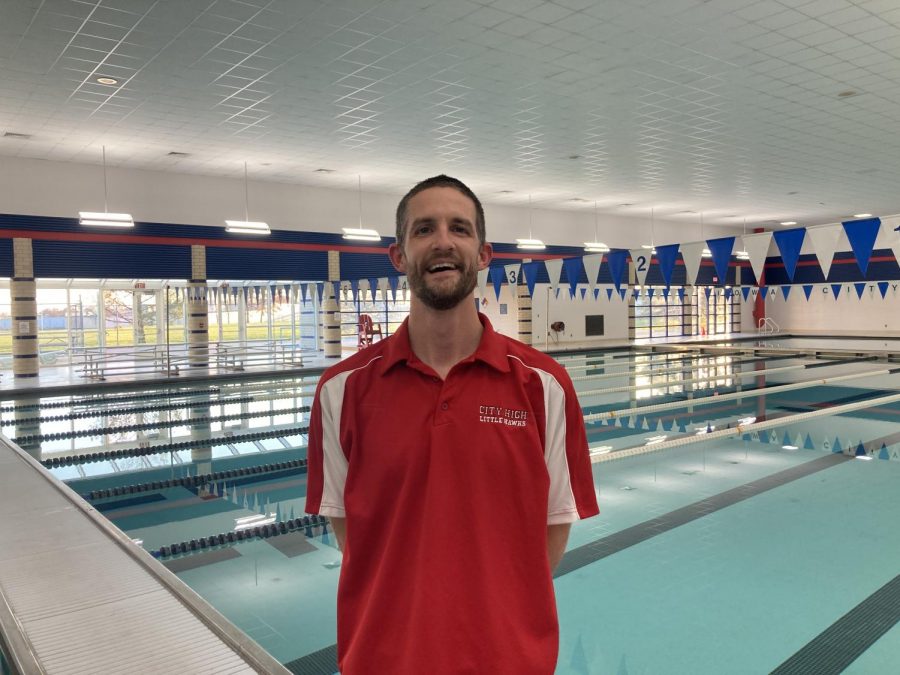 City High Swimming and Diving Head Coach Zane Hugo poses at Mercer on the last day of practice before the 2020 Regional meet.

“[The new job] offers a lot of things that I’m really excited about,” Hugo said. “They have a brand new facility so they’ll be able to bring in a lot of large regional and national level meets up there. I’m really looking forward to just working with these people that are really excited for the new facility that they have and for the programming that they offer for the campus.”

Besides coaching City High’s swim teams, Hugo is also the Assistant Director of Aquatics at the University of Iowa. However, since the university cut their swimming and diving program, Hugo has had fewer responsibilities.

Grace Campion ‘22, a swimmer on the City High girls swim team, is happy for Hugo and understands that this job is important for him. However, she is also sad not to have him as her coach next year.

“Zane brings such a fun attitude to practices and I always enjoy talking to him so I’m definitely going to miss that next year,” Campion said. “Next year is also my last year swimming for the City High swim team and I wish he could be there for that.”

With the boys swim season starting next week, Mandi Kowal will be the new head coach for the boys swim team, pending board approval.

“I’ve had an amazing experience at City High working with so many dedicated student-athletes. I couldn’t have asked for a more supportive administration and the parents have been always trusting. I’ve had a really good experience in Iowa City and at City High,” Hugo said.