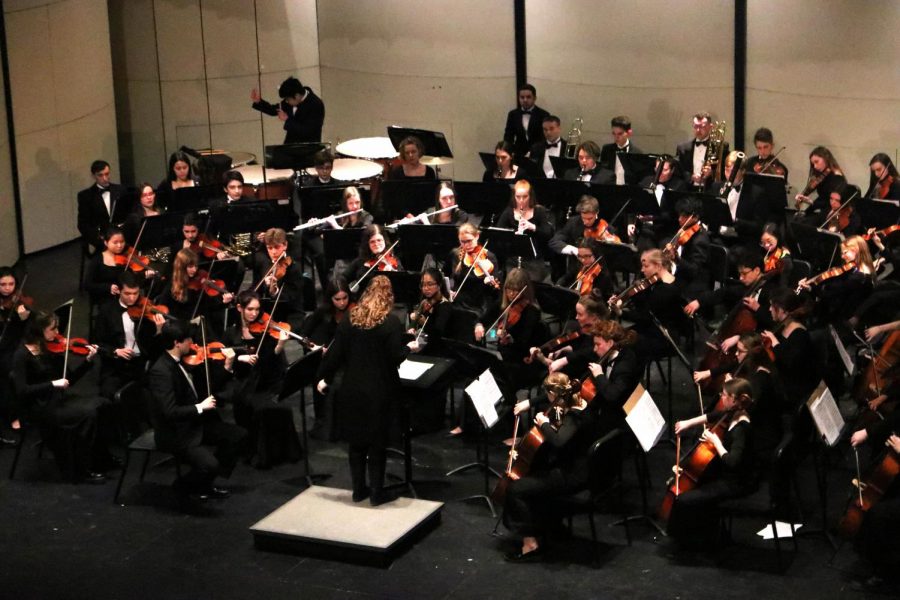 The City High Symphony orchestra joins with members of Wind Ensemble to perform the finale from Dvorak's "New World Symphony" back in February of 2020.

In this unprecedented time where many things are being canceled or cut, a new addition has come to the City High orchestra department. Philharmonic Orchestra will now accompany the Concert and Symphony Orchestra to give students more options for their skill levels.

Megan Stucky-Swanson, the orchestra director at City High says that the addition of a third orchestra will help close learning gaps that were caused by budget cuts that ended the 4th-grade orchestra program.

“The orchestra program is continuing to grow and thrive but there are noticeable learning gaps directly relating to the elimination of 4th-grade strings,” says Stucky-Swanson. “The need for an intermediate orchestra addresses the needs of more learners throughout the program and provides opportunities to succeed based on the student’s performance level. “

City High is now the only high school in the district to have three orchestras. Initially, the planning for the addition was discussed between both City High and West High but due to scheduling challenges, West High was not successful with the addition.

Stucky-Swanson is in favor of the addition but it came with some hesitation.

“This is a big change that must be done correctly or the program could suffer. I feel confident in the research and curriculum planning I was able to complete over the summer to feel comfortable moving forward with all three orchestras at City High!”

“Age is irrelevant as everyone learns at their own pace. The orchestras at City High thrive because there are mixed grades in each orchestra,” says Stucky- Swanson.

There has never before been three orchestras at City High and this is a sense of pride for Stucky-Swanson.

“I think this addition is a huge positive for City High orchestra students! With the ARTS being cut all over the country, I feel a huge sense of pride knowing we were able to add an entire orchestra class. With more options, students should feel more comfortable with their peers knowing everyone in that group is close to the same learning scale.”