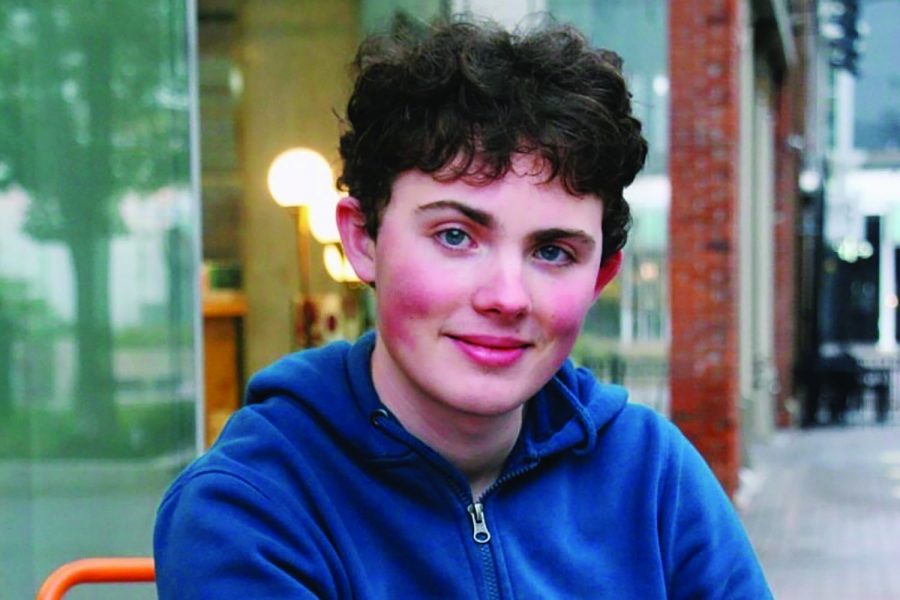 Elliot Murray '21 was one of the seniors voted for Homecoming King this year.

November 2020 has presented a time for historic elections, and not just nationally. On November 6, City High elected two Homecoming Kings for Homecoming royalty for the first time: Joe Bacon ‘21 and Elliot Murray ‘21.

“It’s like trivia. Who were the first two kings? I thought it was funny, it’s neat that I’m the first year of that,” Bacon said.

“It’s a funny joke with my friends, [that] I think the reason I probably kept [getting voted for] was my name is at the start of the list,” Bacon said.

Although the change was made last year, the royalty still resulted in a King and Queen, Robert Tharrington ‘20 and Yardley Whaylen ‘20. However, last year’s court had 13 males and only one female, Whaylen. However this year, the court had a fairly even distribution between males and females, and the senior class voted for two males to be royalty, Murray and Bacon.

Because his father is Principal John Bacon, his father found out the results before he did.

“I guess he told me that he actually knew earlier in the week but he didn’t tell me because he wanted me to tune into [the Friday Show],” Bacon said.

“It feels excellent to be nominated Homecoming King, I did not know I was royalty,” Murray said.

Along with being Homecoming King, Bacon was also Football Captain this year.

“Football I guess is a big part of me and what I like to do and especially senior year, I took a lot of pride in being voted captain and that was cool,” Bacon said.

His dad, Mr. Bacon is proud of his leadership as Football Captain.

“He really demonstrated leadership. I’ve watched Joe be able to go up to a kid that maybe wasn’t wearing a mask and say ‘yeah, put your mask on,’” Mr. Bacon said. “I think Joe got some pretty amazing experiences being a leader on that team going through such an unusual time, so I was really proud of him for that.”

In his free time, Bacon likes to play music, specifically guitar and piano, as well as draw.

“I really love old music. I love Bob Dylan, he is my favorite. I guess I like all that kind of 60s-70s type of vibe. I like the Grateful Dead and all that,” Bacon said. Murray enjoys being outdoors in his free time.

“For fun I like to take walks by the river, and explore downtown. When the school opens back up I might do some events if there is time,” Murray said. “I am very artistic and very funny. My whole personality trait would be described as fun.”

His mother Valerie also describes Elliot as someone who cares for the environment.

“Elliott cares very deeply about the environment and in particular protecting the habitat of animals, he’s always had a really strong interest in that,” Valerie said. “I think that’s something that will carry him forward in his life and he will be part of what he chooses to do as a career. And I think he’ll certainly be a great advocate for the environment, no matter what it is that he chooses to do in his life.”

After graduating, Bacon plans on attending college at the University of Iowa.

“I think I’m gonna attend the University of Iowa, and hopefully go try and study something, [maybe] get a teacher’s license,” Bacon, who’s mother is an English teacher, said.

“After high school I may go to Kirkwood college, and then take a trip to Australia,” Murray said.

Valerie was both surprised and delighted to find out her son was voted Homecoming King.

“I think it says a lot about City High and the students that they would identify someone like Elliot who’s a pretty quiet person as someone that they really like and that they would want to represent them in that way,” Valerie said. “I think he is charming without really trying to be charming. He is really his own person. I think he has an innocent quality that I think a lot of people find very appealing. He’s a happy person, and I think that can be infectious.”

“Ms. Gibbens, she did an awesome job so shout out to her. If you’re on the Court, we each got this little basket and it came with a sash and a gift bag of buttons and little bead necklaces. It is a really nice gesture,” Bacon said. “I woke up and [the yard sign] was in my front yard so that was pretty cool. I think that definitely helped make it a little more special.”

Bacon is proud to be a City High Homecoming King and represent City High.

“[City High is] an old place and a lot of people went through [here]. It’s really important to a lot of people and it’s made an impact in a lot of people’s lives,” Bacon said. “Just to treat it with some respect. It’s high school, high school is a fun time and you’ll only go through it once, so just make the most of it.”