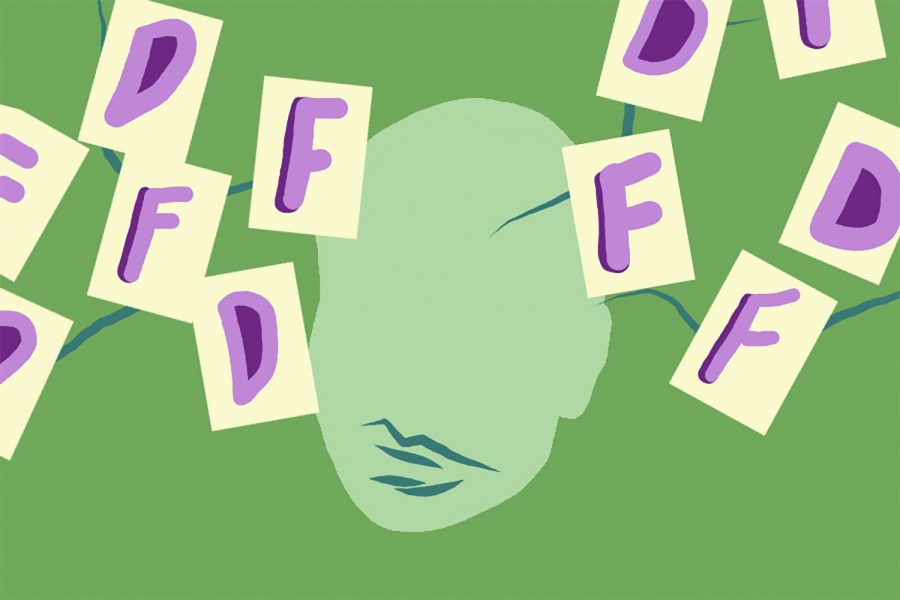 The Iowa City Community School District has seen a rise in failing grades this school year.

The Iowa City Community School District has seen a variety of changes during the 2020-2021 school year. The ICCSD has provided an online academy as well as a hybrid model. While students and teachers are adjusting to meeting over screens, the school district has seen a trend in lower grades in comparison to the averages from previous years. This year, due to a number of factors, more students have F’s than they typically do.

“That news is good because of the decline, but really [22%] should have been our number in a “normal” year at midterm, and so to get to the end of the trimester at that 10% level, we still have work to do,” Scott Kibby, the ICCSD Curriculum Director, said.

Both the ICCSD and City High are finding various ways to support students and fight the decline in grades.

“Teachers and administrators are working on redefining what each course’s highest priority standards are. They are making sure that students are evaluated against those standards as a minimum,” Kibby said. “This doesn’t mean other standards or material don’t count – they do. To get grades like A’s and B’s students are measured against all standards. We are determining what it takes to get passing grades with these priority standards. Hence, that’s one way we are working on addressing failing grades.”

The district is also utilizing Student Family Advocates who are reaching out to students, and the technology department is helping families with internet access. Additionally, administrators and counselors are monitoring attendance to keep an eye on students.

“It was a difficult transition to that mode of learning for a lot of students. So early in the first half of the first trimester, D’s and F’s were up. We’ve really hit it hard. We’ve tried to be very creative and very resourceful, and we put a number of different steps in place,” Bacon said.

“If a student got off to a terrible start, we didn’t want them to be killed and there was nothing they could do to recover,” Bacon said.

City High has also implemented F-Slips, a new system Bacon hopes to help deter failing grades. F-Slips are  pieces of paper with questions that teachers fill out for every student they have failing their class. This is a system that has been used before at Tate High School.

“The idea was just to let us make sure no one was slipping through the cracks and to know that a plan was being made and communication was happening with every single student who was failing the course,” Bacon said. “That was really good, that allowed us to kind of make sure we had a hand around the situation and get a handle on it.”

The slips include questions about whether or not the teacher has reached a parent or guardian, if they’ve created a plan with the student, and if the student is showing up for classes, among other questions.

“We agreed as a faculty we want to formalize and list these steps at City High before any student gets a final grade at the end of a trimester,” Bacon said.

Jared Moninger ‘23 is a student who has been online for the first trimester. He created a petition for the ICCSD to lower the assignment load this year.

“The reason I wanted to make [the petition] was because I was having a really hard time doing all the work and I know a lot of my friends were too. [I thought] someone will do something about it, and then nobody did anything about it,” Moninger said. “I figured one day that I should do something about it, so I made that petition. I wasn’t expecting to get a whole lot of signatures, maybe like 10 or something. Then, today I’ve got 200, which really came as a surprise to me.”

As of December 8, Moninger had over 200 signatures on the petition.

“I think that teachers are treating it as if it’s like a normal year, and that we’d be in the right mindset to do school, but really we’re not. And it’s hard to do school,” Moninger said. “When you’re by yourself and in your own home, because you’re not in that school environment where everyone is being productive and helpful. I know that’s true for me at least.”

A concern with the increase of failing grades is that it is potentially disproportionately affecting lower-income students.

“Iowa City schools face the same challenges that occur across the country in what is typically called the ‘Achievement Gap’. Students of color, students from poverty, students with disabilities and/or students where English is not their first language do not achieve as a whole at the same rate as the general population of students,” Kibby said. “COVID-19 has made this achievement gap worse. So, in addition to the outreach and the focus on priority standards the district staff is being trained in culturally responsive teaching practices.”

An issue with the increase of students with failing grades is that some students may not have equitable access to resources such as wifi, technology, and other items necessary for online learning. Some students may be essential workers during this time, or don’t have a proper learning environment at home.

“Working on the achievement gap is a district goal and at the forefront of every department and a part of nearly all conversations we have about improving as a system,” Kibby said. “We know we have a lot of work to do, but I have seen a commitment to this work.”

Kibby believes students and parents can help the situation by reaching out to teachers. Bacon, who has a senior at City High, believes that parents should monitor PowerSchool and have frequent conversations with their children.

“Have regular frequent conversations with kids, and that’s easier said than done. I definitely recognize the challenge that is, but I think having a regular open line of communication and dialogue that’s non judgmental [is important],” Bacon said.

As the district transitions into the second trimester, teachers and administrators alike are continuing to keep grades up while going to school during a global pandemic.

“I think you’ll continue to see teams of teachers working together to determine the high priority standards within their curriculum and make sure students meet those basic minimums,” Kibby said.