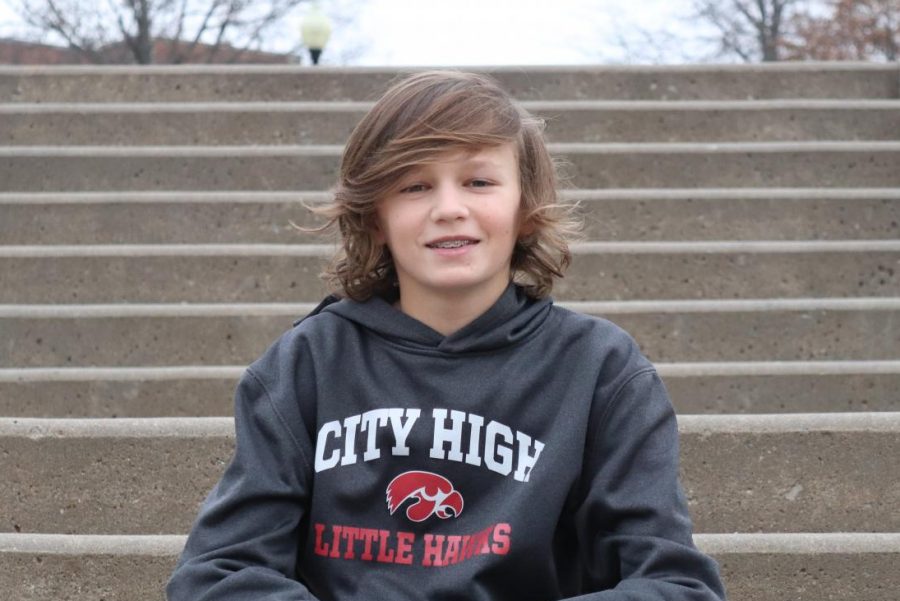 Arthur Hall '24 poses for a picture on the front steps of City High. As a freshman, he is already one of the best players on the City High boys golf team.

For Arthur Hall ‘24, golf has always been a way for him to spend time with his grandfather. He is in northern Minnesota many summers, living with his grandparents and playing golf.

“My grandpa taught me how to play golf when I was around six or seven. It was just a really common game,” Hall said. “I like to spend time with my grandpa, and play golf with him. It’s just competitive and fun.”

This year Hall played on varsity for the City High boys golf team, playing as City High’s number three for the majority of the meets throughout the season.

“Nobody really knew who he was, but about the third day of practice, the other golfers watching him play knew he was very good and one of our top golfers right off the bat as a freshman,” David Brighton, head coach of the City High boys golf team, said.

At the 4A districts meet at Elmcrest Golf Course, Hall completed 18 holes with a score of 92 points, placing him 54th overall, the second highest placing athlete from City High.

“He’s a student of the game,” Brighton said. “I believe there’s a huge opportunity for him to grow and become a very very good high school golfer. He has the drive to be good and the temperament.”

Brighton also believes that Hall has the ability to qualify for state individually in the coming years as well secure a scholarship to play golf in college.

“I’m gonna try to practice golf every day and do everything that I can do to help myself get better,” Hall said. “Long term, I just want to keep working to get stronger and hit farther and I want to play in college.”

Hall has found that golf helps him deal with stress and has taught him how to calm himself to concentrate on matters at hand.

“I try to focus on my shot and not think about what happened before, like if I hit a bad shot before,” Hall said. “I just try and move on from each shot after I take it and not let it affect my game.”

His favorite part of playing golf is talking to the people he plays with and the game itself.

“My grandpa still does play with me,” Hall added.