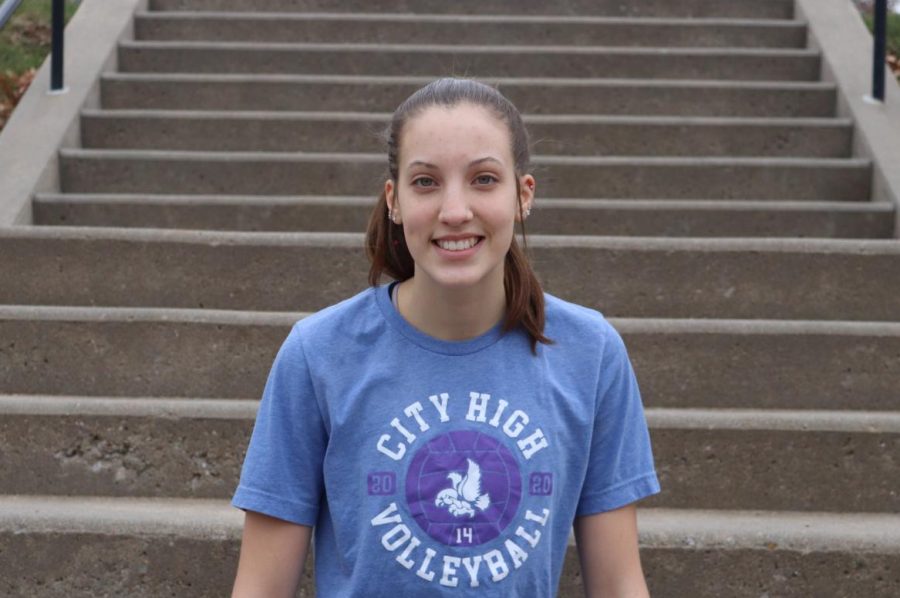 Claire Ernst '24 poses for a picture on the front steps of City High. She is a starter on the City High varsity volleyball team.

When people store things away, they often put them out of sight, where they remain forgotten until they or someone else finds them again. Erika Ernst, who had played volleyball in high school, had a volleyball in her closet, where her daughter stumbled across it around the age of six.

“I just found a volleyball in [my mom’s] closet one day and I was like, ‘Can we pepper?’” Claire Ernst ‘24 said. “That’s basically how it started.”

Claire proceeded to play recreational volleyball for a few years before successfully trying out for her first club team: Imagine Volleyball. Eventually she switched to the Iowa Rockets, which she is still a member of today.

“I love playing with my team. I love this feeling like when you’re scoring a point [and] the adrenaline that you get. When I’m playing the whole match, I just feel really happy and I forget about everything else. I’m just doing what I love,” Claire said.

This past season, Claire joined the City High girls varsity volleyball team, where she was the only freshman as well as a starter and played six rotations, staying in the game in both the front and back rows.

“In the back row I think she may have even surprised herself a little bit with how solid she was back there as a freshman,” City High volleyball head coach Tricia Carty said. “You don’t often find a freshmen that will play six rotations on any team [in our league], but she did.”

Claire ended the season with a total of 136 kills, second on the team only to the 157 kills made by Alia Vanderhoef ‘21.

“I wasn’t expecting to play on varsity and to be given so much playing time. [High school volleyball] exceeded my expectations and it was a lot of a lot better and a lot more fun than I imagined,” Claire said.

Despite being the only freshmen on the team, Claire didn’t feel like she was treated differently by the rest of her teammates.

“I feel like people generally don’t look at me, as a freshman. They expect the same out of me as from everyone else,” Claire said. “They hold me accountable. I felt like I never wanted to let the team down and I never really felt like I was different from any of them just because I was younger.”

“She filled a role this year that we needed filled with our team dynamic,” Carty said. “She is always saying really funny things that made everyone smile and laugh, and we needed a lot of that this year just because COVID threw so many other challenges at us.”

Claire’s ultimate dream is to play Division One volleyball in college and she wants to continue improving to get there.

“I just really appreciate and love her competitiveness. She wants to go out and do the best she can each match because she wants to win. It’s just really cool to see players take that and then over time develop the confidence in themselves. Seeing her develop [confidence] this year was really great and I’m excited to see that continue over the next three additional years,” Carty said.