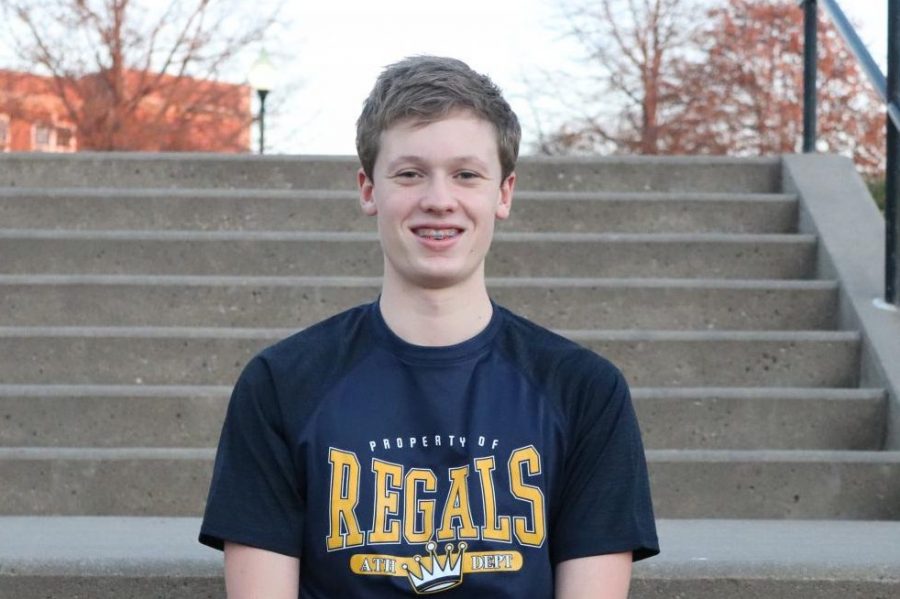 Joe Polyak '24 poses for a picture on the front steps of City High. He is enrolled at Regina but swims on the City High boys swim team.

Early morning practice, jumping into the cold water before he is fully awake and swimming laps, only to get out and go to school afterwards, is a common occurrence for Joe Polyak ‘24.

“[I like that] it’s only you, that matters [in swimming],” Polyak said. “There’s no one else that can affect your outcome.”

Polyak started swimming competitively at the Gators Swim Club in Florida at the age of seven before moving to Iowa and becoming a member of the Iowa Flyers Swim Club. He goes to Regina but swims for City High because Regina does not have a boys swim team.

“I like coming here and meeting new people. Swimming with different people, that’s the fun part,” Polyak said. “Right now, I’m starting to get used to what the atmosphere is like here. It’s all new and different.”

His goals for the future include having the team go to state every year, placing top three at state, getting a full ride to a Division One college for swimming, and placing top ten at the Olympic Trials. He plans to get there by working hard every single day.

“I just say, I’m gonna give it my best and if it’s not enough, so what?” Polyak said. “[I look forward to] getting some records and beating some people.”

Polyak is ranked 209th nationally in the 200 yard freestyle for the 13-14 age group, according to swimrank.com.

“You tell him something and he’ll do it,” IFLY coach Chris Freeman said. “He’s really good at learning from what we’ve done or taking away from other things as well. He’s probably like the easiest kid to coach and super nice as well.”

Polyak feels he has learned a lot of life lessons from swimming including time management and how to have a good work ethic.

“He’s just one of those kids [that] just puts his head down, gets to work and doesn’t really complain. He’s a hard worker and always has a good attitude about it,” Freeman said. “I’m just excited to see where he ends up.”