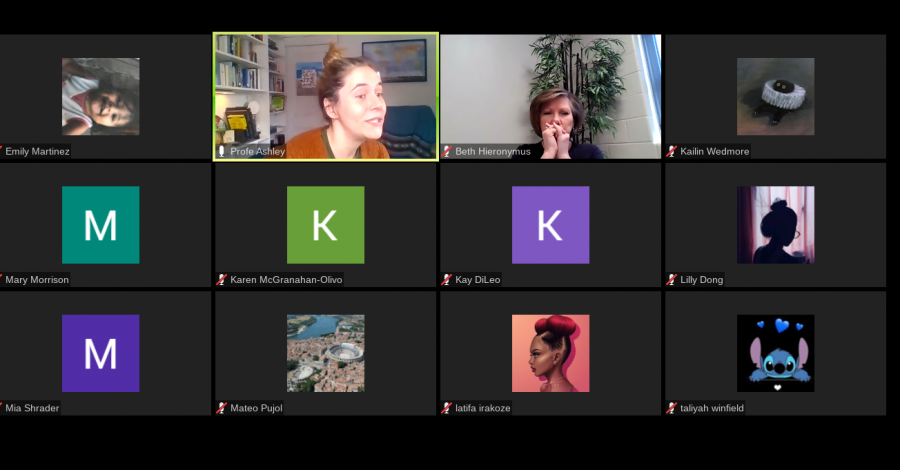 For the past two years, City High has held a day of learning dedicated to educating students about civil rights activist, Dr. Martin Luther King Jr., along with other educational activities, field trips, and speakers. Due to the pandemic, the district held a completely virtual day of learning for all students grades seven through 12 in the ICCSD to participate in on Wednesday, January 13.

Many teachers and staff urged students to participate in this virtual event as a way to learn more about Dr. Martin Luther King Jr. and other interesting educational activities.

“I chose to participate because I love learning about MLK Jr. and the history of civil rights and diversity around the world,” Adam Holmes ‘21 said. “I like how the school offers it because it’s a nice break from normal classes and it allows people to learn more about things that are happening in real life right now.”

The virtual event consisted of three, 50 to 55 minute long sessions in which students could choose from a variety of sessions and activities.

“I chose to participate in this year’s virtual MLK Day event because I was actually looking forward to it,” Natalie Nunez ‘22 said. “I’ve participated in the previous years MLK Day events and I’ve left gaining more knowledge and I enjoyed them.”

With over 50 sessions to choose from, many were to learn about Dr. Martin Luther King Jr. himself and his activism, student mental health, social justice, and more.

“I participated in Mr. Schumann and Mr. Burkle’s sessions as well as hosted one with the MVP group, so I definitely learned different things in each group,” Melanie Tran-Doung ‘21 said. “With MVP, we discussed the topic of racial inequality and I learned more about myself and the other people in my group as well. I was able to learn more about Iowa’s history in Mr. Schumann’s class and as for Mr. Burkle’s session, I was able to learn more about comics.”

Many students felt the sessions were overall beneficial and an opportunity to learn about interesting topics in an educational setting. Because sessions were completely virtual, both hybrid students, along with online students, were able to attend and participate.

“I learned that everyone has a different story. Each story is its own and is very unique. In my first session, [a] woman talked about her immigration story from Vietnam to the states and I was shocked to learn how different it was compared to my parents. Both my parents are immigrants and I’ve been told of their own immigration stories, however, theirs were very different from the woman’s. I learned to not just assume I know someone’s story,” Nunez said.

“I learned a lot about the history and culture of Blues music from going back to the times of Slavery in the United States, and how it’s developed since then,” Holmes said. “B.F. Burt also played some really cool music so that was a fun session. My other two sessions were about diversity and black history in comics. Comics are something that I’m very interested in so it was really cool to learn about the origins of certain characters and how comics have changed and became more diverse over the years.”

Compared to other years, students still found the virtual day of learning to be an enjoyable and accessible event to take part in from home.

“I actually did enjoy having a virtual day of learning for the MLK events because I have a hard time sitting in one place for a long time while trying to pay attention. But since it was virtual I was able to pay more attention since I was in the comfort of my own home. I was able to move around instead of just sitting for a long period which actually helped me pay better attention,” Nunez said.

However, there have been some critiques over the organization of the event being held online by students.

“I would’ve much preferred to be in person, but I think overall it went alright. There was quite a bit of miscommunication, I think a lot of teachers and students were confused [about] how things were supposed to work. Also, I’m sure more people skipped this year since it was only a half-day and virtual,” Holmes said. “There were a couple of interruptions from students and the Zoom chats were pretty crazy. It was an interesting choice to let junior high students be in the same call with high schoolers, but I get that they wanted to offer the same presentations.”

Many found having educational events like MLK Day during school allowed students to be able to learn more about activists such as Dr. Martin Luther King Jr. and American history that many are unaware of as a way to give students a broader perspective of how and why our society is the way it is and what we can learn from it.

“I think it’s important for all students to have an understanding on different topics that may not directly pertain to them,” Tran-Doung said. “I think, educationally, students have to be willing to go to the events and want to choose sessions that would further their experience. Having many different options is definitely a great way for people to learn about things they might not have known or further expanded on their [knowledge].”

Students also found that the variety of sessions offered opened up more opportunities for students to want to participate.

“I strongly believe that students benefit from having educational events. For the MLK Day events, they make it so you can choose events that are in your interest. They do not force you to attend an event you don’t want to. They do it this way so that you go to events that you’re interested in,” Nunez said.  “I would like to see more speakers of color [though]. Although I am sure that there were plenty of POC speaking at these events, for my specific sessions there were only white speakers and it just felt odd for them to be talking about race/racism as they have never actually experienced it first hand.”

Offering a day of learning during school was useful for some students as they were given the option to participate in activities and topics that interest them.

“I do think students benefit [from educational events like MLK Day]. The ones who didn’t go or skipped probably wouldn’t have gotten as much out of it, but I’m just really glad that our school does offer something like this. You get a different experience from school. You learn about MLK Jr.’s values and how important the civil rights movement was, and it’s much more human and introspective than like a math class,” Holmes.

As for next year, many are still unsure of what is to come in terms of COVID-19 but are still eager to have educational events such as MLK Day of learning, whether it be virtual or in-person.

“We live in a community that has so many people doing amazing things. A day like this is a very cool way to bring in community members to enrich the educational experience of our students,” Bacon said.