The Ethics of Your Indie Music Streaming

Self-producing music has been easier than ever, but the pay is lacking 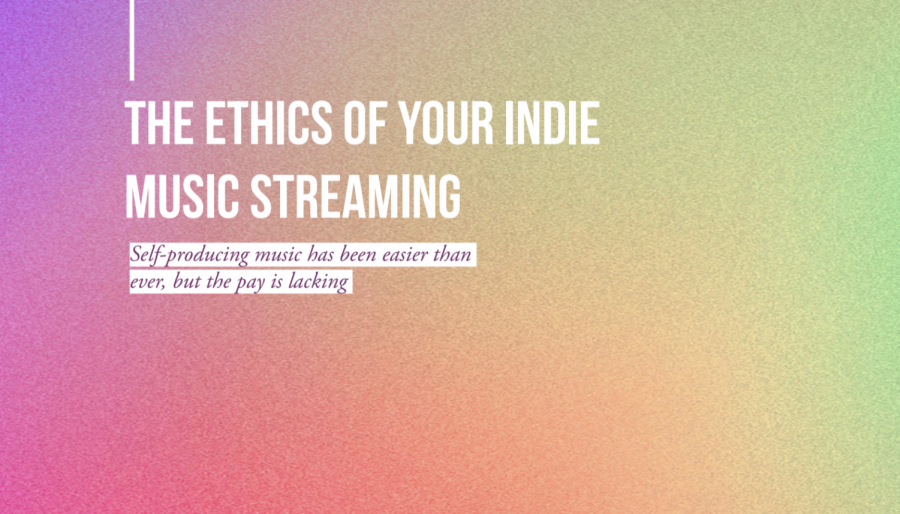 Opting to self-produce music is incredibly easy. But making a career out of it is harder than ever.

Tucked between thick forests of sugar maple trees is the undisturbed town of Ballston Spa. Just twenty-five miles from Albany, the town is surprisingly famous for its size, drawing attention to its historic roots in colonial America. Of Ballston’s 5,300 residents, one young man has turned his coveted rural New York haven into his songwriting studio and home.

Singer-songwriter Will Seifert releases music under the name “Sun is Poison.” Soon after his first releases, Seifert decided to seek out other ways to gain an audience than relying on the traditional means for his two self-produced albums and three solo projects, opting to do what many artists starting do: self-produce.

“Indie” or Independent music, is music produced without a commercial record label. The term can be traced back to the 1920s, describing independently produced cinema, films that are made without the money or support of major production studios. Since then, the term started to label musicians who self-produced their work or who secure independent record labels.

Many artists start with independent or smaller labels, with many making the switch to a major commercial label after gaining traction in the industry. The advantage being that major commercial labels have the financial backing to promote artist’s work. However, staying with an independent label or self-producing work usually ensures the artist a greater level of freedom with their music.
“I think it depends on how much of their identity is owed to their freedom, but a lot of the time they lose their personal identity and have to stick with the sound that made them popular,” student and alternative music fan Nicholas Thedens ‘22 said. “Record labels have, in some artist contracts, that the album must be commercially satisfactory and be approved, meaning musicians can be trapped to make something boring and derivative.”
However, in more recent years, the term “indie” has been used more loosely to describe a certain sound of music. Ruby Miller ‘22 described indie music as “more of an instrumental and modern pop, but not as fast-paced,” adding that she thought the question was difficult to answer due to the scale of the indie genre.

“To me personally, I think indie today is more an evolution of alternative rock from the past, which did have a tendency to be independent groups, and is more building and the sound and styles those bands had, while not maintaining that anti-corporate culture as much,” Thedens said.

Thedens believes that independent music has become “less to do with how connected the musician is to the music industry and more about its connection to the mainstream sound we hear,” further affirming that the term “indie” means different things to different people interested in music.

“To describe indie music to someone who’s never heard it I would probably say something like, ‘Its music that anyone can make.’ Not to say that it doesn’t take talent –it does, but you don’t need to have lots of resources or an amazing voice to make good indie music,” Rachel Johnson ‘24 commented.

Both Johnson and Miller have long been interested in and inspired by, the music of the past and present. Collectively, the two enjoy listening to artists such as David Bowie, Nirvana, Sleater-Kinney, The Smiths, Neutral Milk Hotel, The Regrettes, Surf Curse, and more generally, alternative rock/pop and 70s or 80s classic rock. The two cite their parents as the primary source that inspired their current taste in music.
“I think my interest in music started with my parents, specifically my dad who has a large vinyl collection,” Johnson said. “Then as I got older and got a phone with streaming services, my taste started to branch off and I started to feel very connected to music.”
Due to both his music’s sound and production, Seifert’s music falls safely into the “indie” genre. Seifert explains that the sound of his music has been heavily influenced by other independent artists like singer-songwriter Daniel Johnston, known throughout the lo-fi and outsider music scenes, and the rock band Guided by Voices, making their debut 1983.

As for his releasing his music, Seifert started with SoundCloud. Soundcloud is popular among artists who are just stepping foot into the music industry, with notable musicians such as Post Malone and Doja Cat finding their footing in the industry through the online distribution site. However, Seifert has since moved away from SoundCloud, opting for the Internet music company Bandcamp instead. Bandcamp, an indie-friendly platform, allows musicians to sell their music and merchandise, usually with a set price, or you are given the ability to name a price.

“I think it’s nice for artists to communicate with each other [on SoundCloud],” Seifert said. “on Bandcamp you can’t like tracks and comment or follow or stuff like that. It’s less social, but I don’t mind the lack of sociality with it. I still have all my stuff on Soundcloud but I haven’t checked it in several months”

Putting your music onto more well-known services can be difficult. Usually, artists must pay for an extra service to do so.

“In distribution, I’ve gone through a few platforms,” Seifert said. “When I started wanting to put stuff on Spotify, this was maybe in like 2018, I think the last Will Seifert album, I think was the first thing I’ve put on Spotify.”

To release music onto platforms such as Spotify, Seifert started with a service called RouteNote, which is completely free and a good place to start according to him. One disadvantage of the service is that it can take relatively long for your music to be put onto streaming services. In some cases, up to a month.

“It’s a really good place to start, they do take like a chip, out of your earnings I think is maybe like 10%. But that didn’t bother me too much,” Seifert said on RouteNote.

Later, Seifert moved on to a new service called DistroKid to release his music to streaming services. He used this service when releasing his first album under the name Sun is Poison, titled Beheading Party. The service takes $20 a year from the artist.

“I eventually switched over to DistroKid which is what most people use, that’s what I use now. mostly because it’s very quick,” Seifert said. “The first album that I used distro kid with was Beheading Party and I was used to it taking a few weeks but it was up, maybe a day or two after I submitted it. So that was cool.”

Seifert said that getting music onto streaming platforms is surprisingly easy, but an area that can cause issues is copyright when sampling other media.

“On one of my older projects I know, there was one EP that I wanted to release at the end of one of the songs. It was just an instrumental over an interview with Daniel Johnston, and RouteNote did not like that at all,” Seifert said. “So they’re very picky about sampling, that was like several-month processes of me kind of trying to talk to them until I just ended up using some random different service. I think that was TuneCore, which was free at first but they charge like $50 a year.”

For musicians that are just getting started, a $50 charge could keep them from releasing their music. With the way streaming services are set up, it is unlikely that artists will easily be able to make that money back.
“I think there is some issue with the ethical side as artists are paid less than half a cent per stream. Some artists, like Bob Dylan, have just sold their entire catalog as they see it as a more profitable venture,” Thedens said. “I don’t think music streaming services can support most of those purely independent artists, and don’t work as a form of income, and up being a way for artists to advertise themselves to hopefully get more people to go to their concerts, as that’s now the major source of income for artists nowadays, which due to COVID-19, has slowed to a halt and has left more musicians struggling. The best way fans can support artists right now is to buy albums, as you can’t go to concerts.”
Thedens believes that due to the changes in business models, smaller artists have trouble staying afloat from the profit they make from their music. As he explains it, “with records, there was less upfront investment and you could see people buying records from varying ranges of popularity, meaning you see relatively obscure groups still capable of supporting themselves on solely their music. With concerts, someone isn’t as willing a higher price on the same amount of bands, so they’re only going to see their favorite bands.” Thedens adds that although the music industry has maintained similar revenues during these changes, the distribution of to smaller artists is less than they were historically.

Although making money through streaming is difficult, that is not why Seifert does it. Seifert believes that making money off of streaming is “kind of a pipe dream for the most part.”
“I’m not trying to do music as a job. For someone who is trying to do that, I think it’s really hard now, maybe even more so than it used to be. Physical music doesn’t really sell anymore except for vinyl,” Seifert said.
Johnson and Thedens both agree with Seifert, citing that the changing music industry has contributed to greater distribution, but less profit from music.

“In my opinion streaming services have both negatively and positively impacted artists,” Johnson said. “Negatively because they make much less money from streaming than they would if people bought as [much] vinyl and CDs as they used to. They’re positively impacted because it’s much easier to find artists now, I find a lot of artists (especially newer ones) through the Spotify discover weekly playlist. Another advantage is that streaming doesn’t cost anything while records and CDs do.”

Seifert is not on a label but has worked with Autumn Sounds for all of his physical releases, like cassettes that were sold over Bandcamp. Shipping can be very expensive, so he has ended up spending more on the cassettes than he is making. Seifert states that he does not mind though.

Despite the cost Seifert has experienced, experts assert that buying physical copies of music, such as records or CDs, or buying a digital album for full price, is the more ethical way to support an artist, sentiments that both Johnson and Miller share. However, that’s from a purely economic lens and ignores the environmental cost of producing physical copies of music.

“I’d say most artists were best supported during the 80s because the music was so popular then and people could go out and buy records or CDs instead of finding them online for free, the artist also could interact more with fans and could perform in huge crowds,” Johnson said.

Nowadays, buying a physical copy of a music artist’s work is typically reserved for collectors or devoted fans. While it is true that vinyl has had a comeback, the vast majority of average music listeners opt for the major streaming services such as Spotify, Apple Music, and Pandora due to its ease and cost. Regardless, Seifert has found a home in the industry, garnering a small following of fans keen on having a physical copy of his music.

“I think that it’s very cool and it means a lot to me personally that someone would want a physical copy of something I have made,” Seifert said.