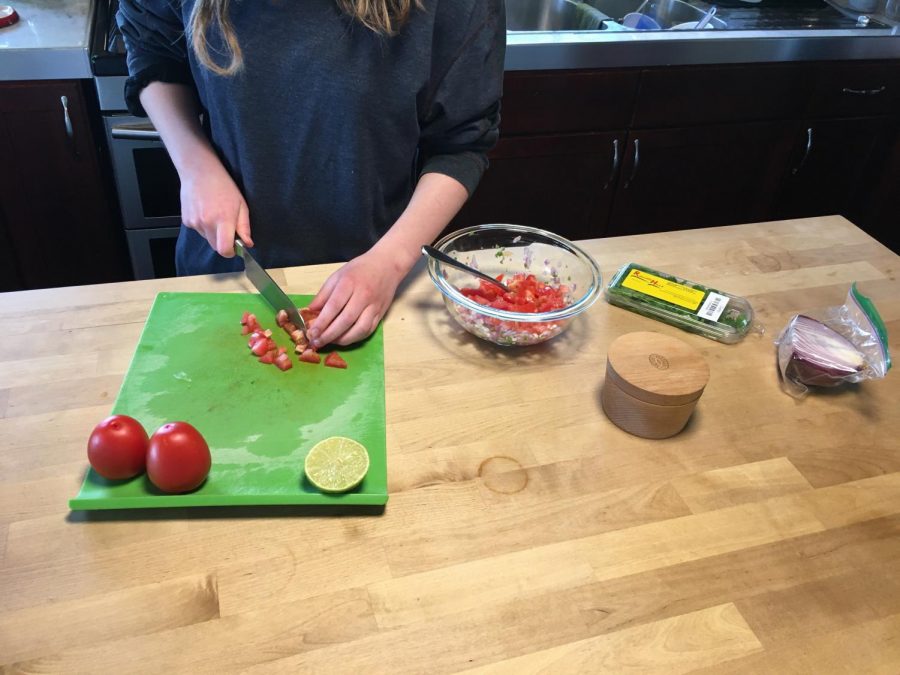 Lily Vanderlinden '21 chops up tomatoes for a salsa recipe.

Since the pandemic started in March, many high school students have found themselves with more free time on their hands. Some have made use of this extra time through picking up new skills and hobbies. Many have taken up an age-old activity of cooking.

“I probably do something like every other week. I made cookies this week and a few weeks ago I made cream puffs. A lot of it is what ends up on my Tik Tok For You Page, which is kind of embarrassing,” Katherine Geerdes ‘21 said. “I’ve kind of switched over to cookies and mostly desserts, like cinnamon rolls.

Like Geerdes, Lily Vandelinden ‘21 has also picked up baking desserts, among other things, during the pandemic. Vanderlinden had been wanting to make macaroons. After making them, she continued to cook and bake.

“Before the pandemic, we were super busy with things like theater and school, but I always wanted to try to make macarons. They’re really pretty and I was just always drawn to them,” Vanderlinden said. “During the first part of quarantine, I was able to dedicate some time to it and I learned how to mechanize and how to pipe them into perfect circles. I also learned that I don’t like macarons because they’re too sweet for me. But I do like to make them for other people and also, they’re pretty.”

Amelia Lang-Fallon ‘23 has been baking during the pandemic but has started baking gluten-free due to her recent diagnosis with celiac disease.

“I’ve been experimenting a lot with making gluten free bread, and I made some gluten free cake, which has been surprisingly easy. There’s actually a lot of resources and a lot of general flour that’s gluten free that you can buy,” Lang-Fallon said. “The recipes are actually harder to find because it’s not that simple, you can’t just substitute in gluten free flour for regular flour. So it’s a bit more complicated, and finding good recipes that taste the same and produce the same results with gluten free flour is definitely a challenge. It’s been fun to experiment and see what we can come up with.”

Lang-Fallon has found her inspiration for recipes through various forms of media such as the Great British Baking Show. Like Geerdes, she also found inspiration on Tik Tok.

“There are a few accounts on Tik Tok that I find are [easy to follow]. I like seeing people enjoy baking, not any specific recipes or anything. That inspires me,” Lang-Fallon said.

Sam Strathearn ‘21, however, found his inspiration for starting to try new recipes in nature. Strathearn started mushroom hunting in the beginning of the pandemic which led him to finding different ways to cook with mushrooms.

“I forge them myself and then I cut them up and serve them at home with my family. That hobby transforms into a thing for cooking,” Strathearn said. “I’ve collected a lot of different mushroom species that you usually can’t find at the store, and I try different ways to cook them.”

Strathearn started out by hunting for Morel mushrooms, a popular springtime activity for many Iowans.

“[Hunting for Morels] made me wonder what other stuff I could find. Throughout the summer, I would go looking for other stuff, not specifically for edible mushrooms, just for anything,” Strathearn said. “I would find this mushroom called Chicken of the Wood and Shrimp of the Wood as well. We’d slice it up and fry it, and it tastes very similar to chicken, which is pretty good.”

Not only has Strathearn been experimenting with various mushroom recipes, but he has also started exploring Asian cuisine.

“I really like food with noodles and kimchi as well,” Strathearn, who has been going to a local Asian grocery, Chong’s, to shop, said. “I’m still on my cooking journey.”

One reason some high school students have picked up baking during the pandemic is that they find that it is a way to unwind.

“It’s kind of calming, for me at least. A few years ago, we got one of those automatic mixers, so I can just watch it. I’m sure if I didn’t have to watch it, it’d be a lot more difficult, or I’d just be too lazy to do it all that often,” Geerdes said. “I think it’s kind of calming, just getting recipes or getting ingredients and then not having to work that hard.”

For others, in a time of isolation, baking gives students something to do.

“Since we are in a pandemic, it’s hard to go out and see your friends. Baking is something that is very easily accessible and it’s a good thing to do because I’m sitting at home,” Lang-Fallon said. “I don’t want to just be watching something. It’s creative and it makes me do something.”

Some students also feel that baking and cooking is a time for bonding with others. Strathearn has been cooking his recipes and foraging for mushrooms with his sister.

“We’ve definitely gotten closer because of it. She’s really excited to go foraging this spring with me and I feel that just being in nature with people is kind of a bonding experience,” Strathearn said.

Vanderlinden has spent time making dinner with her mom who has also been teaching her family recipes.

“I used to cook with her before the pandemic, but obviously we had more time constraints. So I really enjoyed learning how to make meals that take all day, like how to make a roast, mashed potatoes, gravy, and some veggies. [Making] a full meal, that takes a longer time, so I’ve really liked being able to connect with her,” Vanderlinden said.

Vanderlinden hopes to continue exploring baking and cooking even after the pandemic is over.

“With the success of my macaroons, I’ve started making them to give as gifts to people,” Vanderlinden said. “It’s an outlet and I totally want to do that feature.”