HUMANIZE MY HOODIE: Behind the Brand 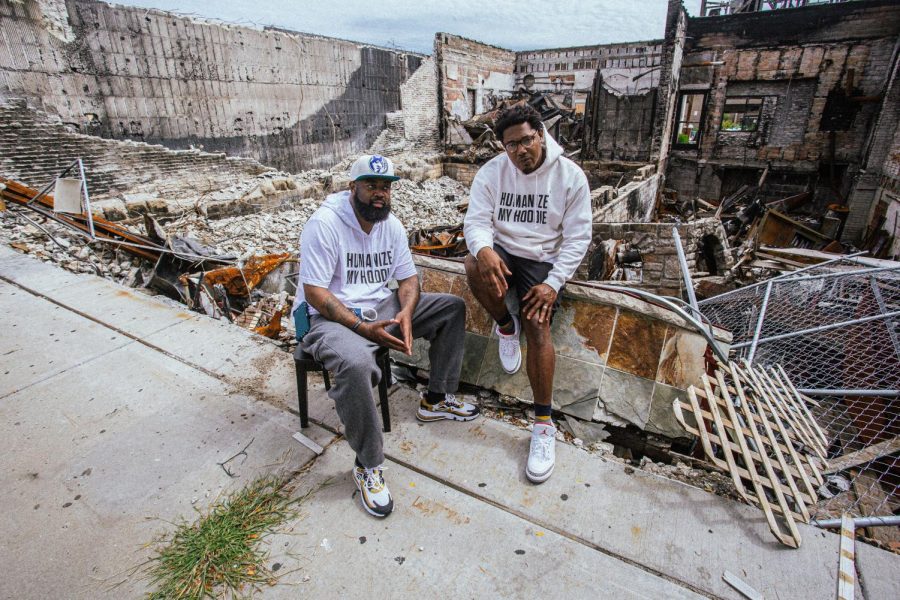 In the peak of summer 2020, as Black Lives Matter protests were in full swing, many brands began taking an oath to do their part in protecting Black Indigenous people of color. One organization in particular, native to Iowa City, has been committed to challenging racial stereotypes while supporting the Black community since they first opened their store.

Humanize My Hoodie is not only a brand, but is also a movement. Humanize My Hoodie’s mission is to disprove the stereotype of Black criminality. The movement works to design campaigns that fight for racial equality, and humanize Black and Indigenous people of color. The movement also offers ‘Homework Hotline,’ an online tutoring service available to K-12 students.

Wright has been interested in fashion for most of his life, and although he never studied fashion in school, he became a self-taught fashion designer. Wright designed a number of collections and became a trailblazer in the fashion industry for creating something that had never been done before.

Joining forces with his childhood friend, Jason Sole, Wright worked to build the Humanize My Hoodie brand. Sole is a criminal justice educator, keynote speaker, and trainer, and he currently works as an adjunct professor at Hamline University. Wright and Sole worked together to educate on and further the movement on both a classroom and a worldwide level, using fashion to do so.

“Jason and I are just facilitators of something that we created for young people to really have a voice. At the end of the day, the people who we need to be humanizing are the young people — especially the young Black man,” Wright said. “Imagine what he faces every single day when he walks out his front steps.”

Wright emphasized the importance of opening a line of communication, which isn’t always easy to do. By wearing an article of clothing that challenges stereotypes, it is a form of opening the conversation.

In addition to ally hoodies that read ‘Ally of the Humanize My Hoodie Movement,’ the brand offers cultural competency training, allowing white individuals to go through workshops and further educate themselves on racial injustice. Humanize My Hoodie University is a virtual, educational resource that has trained over 1,000 people so far.

“Allyship is not just a word, it’s a verb. I feel like allies need to stand front line, and they need to have the conversation about racism and what it means to be racist, and how to be an anti-racist.” Wright said. “Racism has been overly exposed for many years, but now it’s super transparent and very apparent in our society.”

Wright explains how white allies should use their racial privilege to fight for justice, and support the culture and movement in every way they can.

“We feel [allies] need to be listeners, and understand Black-led movements. They can’t just speak about having Black friends, but how are you supporting the culture — when we’re getting the most harm, and we’re getting the worst treatment,” Wright challenged allies of the movement. “How do you minimize some of that? How do you take some of that load off the Black people, and you use your privilege to help us?”

As an ally, there is a distinction between amplifying BIPOC and speaking over them.

Lusala has an interest in art and activism and finds it important to merge the two topics. She began working on projects with Wright over the summer, and was then offered a year-round internship at Humanize My Hoodie.

“I organize [photo]shoots, find models, open the space for everyone, and make sure everyone’s comfortable. I work with the youth over the summer, we have a youth space, and I find people to come work with us,” Lusala explained. “I started a committee and found a bunch of artists in Iowa City, to work with Andre. I connect [Andre] with the youth in a way.”

Lusala has been heavily involved with the Iowa Freedom Riders, a racial justice activist group, and frequently attended Black Lives Matter protests in Iowa City throughout the summer.

“I’ve learned that yelling in people’s faces, and going out into the streets, and doing what they don’t want us to do, is not the only way to get things across. We can do it through things like art, and writing, things that people love. It’s crazy how you can shape the way people’s minds think through art and activism,” Lusala said.

While Lusala has experienced racism in her own life, she continues to learn and expand her knowledge — listening to others as they share their stories.

“Growing up Mixed in a predominantly white town, I know Black struggle, but I don’t know it to an extent. Andre has traveled so much, knows all these people, and I’ve talked to these people, heard their life stories, and learned that everybody in a different place has their own struggles that they go through,” Lusala said. “I love meeting new people and learning about their experiences. It’s really great, and it kind of opens me up.”

“There are so many brands out there. Over the summer people started selling Black Lives Matter shirts, but if it’s coming from a white man selling them, then that money is going to go back into the white man’s system. We need to be putting money into the Black [economy],” Lusala said.

Although Iowa City is considered progressive by some, the community is looking towards the school district and City Council for guidance in terms of equity and inclusion.

“We’re going to talk about what it means to be Black in the schools, how things need to change from the whitewashed curriculum, to the microaggressions and macroaggressions, and the school to prison pipeline. COVID-19 has opened our eyes to a whole other platform to be able to use digitally,” Wright said.

Although the in-person store experienced a closure in height of the COVID-19 pandemic, clothing and other items are available for purchase on the Humanize My Hoodie website. Resources in education on racial and equity injustices can also be found on the website.