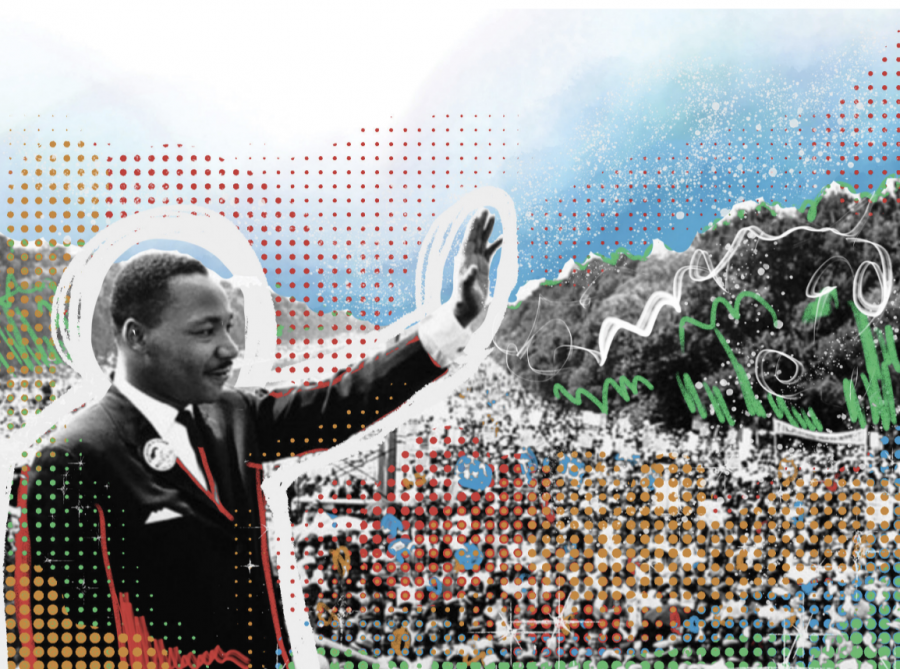 Martin Luther King Jr. at the Lincoln Memorial in Washington DC giving his 'I Have a Dream' speech

Martin Luther King Jr. Day, also known as MLK Day, is a national holiday celebrated on the third Monday of January each year. This holiday is dedicated to being a day of service and learning about civil rights activist Dr. Martin Luther King Jr. and his legacy during the Civil Rights Movement. For City High students, this holiday represents a way to continue honoring Dr. King’s message and issues concerning the black community.

“Martin Luther King was a great American hero. He was a fighter for justice and equal rights and that’s really important that we recognize that today and [that] we try to live it out every day,” Joe Bacon ‘21 said.

Dr. King was a spokesperson and leader of the Civil Rights Movement who spoke out against segregation and sought equality and human rights for African Americans during his era. His speeches and words alone motivated and influenced others alike and still to this day his words resonate greatly with others, including City High students who are admired by his activism.

“I think [MLK Day is] important to celebrate because he was a very big leader for civil rights, and his whole movement of equality and standing up against what’s wrong,” Jess Young said. “I think he was just a very influential person, all around, and I think it’s very important for people to see the struggles of what life was like, only a couple of decades ago. And also, to see how far we’ve come as a country, and to see that things were a lot worse and that his fight for civil rights really did help the United States as a whole.”

Students and others have found ways to take part in this holiday this year by spreading awareness on social media, educating oneself on the history of MLK and current events that affect the black community.

“It’s a good time to educate yourself about things that black people have gone through in the last 100 years in the U.S. and know what you can do to help make life more equal for them,” Matisse Arnone ‘23 said. “There are lots of organizations that people can volunteer for in the community, and I think [MLK Day is] a good day to give back to your community by volunteering at the food pantry, or doing something like that.”

Students also found this holiday to be a great opportunity for voicing opinions about current issues and how they relate to Dr. King and his activism.

“It’s really important to take part in our political system. It was an election year so a lot of people really voiced their opinions about certain issues including police brutality so I think making sure your voice is heard, making sure you vote, donating to the right places, and signing petitions is all really important to solving the issues that occur today,” Bacon said.

However, recently there has been some controversy over how the education system presents historic black people such as Dr. King and how much of his legacy and views have been looked over.

“I feel like the education system just talks about [MLK’s] fight for civil rights but he did a lot of other things that weren’t really covered like capitalism and other forms of equality as well,” Young said. “I would just say to do a little more research about his movement and then maybe even look at people who are inspired by him and see if there’s a [similar] movement that you can get behind.”

“There’s always room for improvement, but I think the school district has done a pretty solid job with the introduction recently of not just [having] the day off of school on Martin Luther King Day, they kind of turn it into an educational holiday, not just school [and offered] a lot of really interesting like classes,” Bacon said.

Students also feel that the ICCSD has done a good job of making black students feel supported, however it lacks in representing other historic black people and the treatment of black students.

“I think our community does do a good job on the aspect of making sure that black people feel supported and by letting them know that people are here from you and there’s someone who can go and talk to you,” Young said. “At the same time, there are some issues within the community, specifically about the school district as a whole. There are ways as to how black kids are treated [compared] to other kids like we see black kids getting suspended, and in trouble more often than white kids for this exact thing. I think that the education system as a whole is very whitewashed, I would say we don’t really learn about that many powerful black people [other than] Rosa Parks, MLK [or]the Black Panthers.”

Dr. King was a preacher of many aspects, such as ending segregation and discrimination against black people and instead emphasized the idea of equality and kindness for all.

“I think [MLK’s] message [was] that we as a society shouldn’t discriminate against people based on the color of their skin, because no one has control of that,” Arnone said. “[People] have control [over] their personality and so that is what we can judge people based on.”

Dr. King was also very vocal about being peaceful in terms of protesting in order to get his message across and ultimately becoming a symbol of nonviolence protests, however, on many occasions, Dr. King defended the action of rioters stating that “A riot is the language of the unheard” when condemning the social and economic injustices black Americans faced.

“Our society today is a me versus you mentality. I’m trying to get better at this as well because I find myself judging others for thinking a certain way, when really you should be trying to understand each other and why you believe what you believe,” Young said. “I think a lot of people need to work on that. Social media has really pushed the divide between specifically the left and right and I think MLK would be very upset to see how much divide has [been] caused over the last couple of years.”

With the reemergence of advocating against issues within the black community such as the Black Lives Matter Movement and protest from students and others alike, giving awareness to historic black heroes such as Martin Luther King Jr. continues to be of great importance when it comes to sharing his message and legacy.

“I think it’s a practice that you preach [type of] situation. It’s very hypocritical to support Martin Luther King Jr. and his message, and then go [support] politicians that are completely adhesive. You have to just put yourself into other people’s shoes,” Young said. “I think that you should [practice what you preach] by yourself [by] treating people more equally and [being] more understanding.”

Martin Luther King Jr.’s influence on injustice in the black community is a topic that still relates to some students and others today. Taking this national holiday to educate oneself on issues concerning the black community and Dr. King’s overall activism is an important aspect to sharing his legacy and contributing to this day of service.

“A lot of people throw up posts and stuff on MLK Day for whatever purpose they want him but I think really taking what he says to heart and trying to live that out on a day-to-day basis is [really] important,” Bacon said.