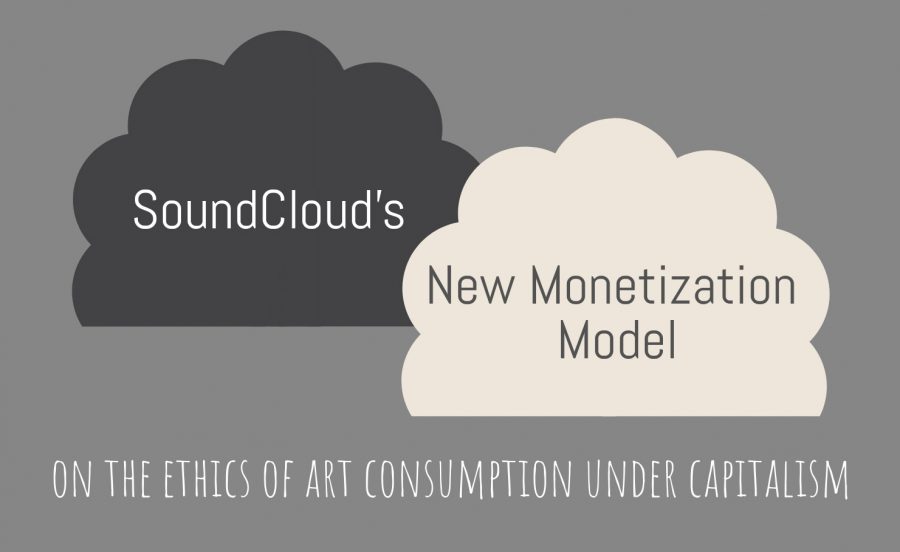 Starting in April of this year, the popular streaming service SoundCloud will be replacing its old model of monetization with an improved version. Fan-Powered Royalties was created to pay artists according to how much their music is streamed. Made with independent artists in mind, this new form of payment will be a better representation of how they are doing on the platform. This new model is still exploitative of artists. While it is a more fair way to consume independent music compared to the previous model, it still isn’t as ethical as it could be.

The former method of paying artists was geared more towards big musicians that made up the majority of streams on the app. Independent artist’s funds had gone to these larger artists previously. Now that SoundCloud will be ending this practice of paying by total share of streams, I predict that this service will grow and become more used than Band Camp.

For those thinking of monetizing their music through SoundCloud with this new model arriving in the spring, I would recommend growing your presence on the app before making the decision to subscribe to their different programs. A downside of this new model is that artists must be subscribed to one of their programs. These include SoundCloud Premier, which is only for independent artists that are subscribed to SoundCloud Pro Unlimited. Artists who managed to qualify for Premier will have their monetization terminated if they cancel their subscription to Pro Unlimited. One of the other programs that can make you eligible for the new Fan-Powered Royalties is Repost. Repost is designed for those who want their music to be on all platforms. This is the most accessible program because there are no eligibility requirements. You must pay $30 a year for this, which isn’t an accessible option for some musicians. The final program that grants eligibility for the new monetization program is Repost Select. The chances of an independent artist getting an invitation to this program are slim, but you can submit an application to join.

Fan-Powered Royalties will pay artists based on how much a SoundCloud user listens to your music compared to their total listening time per month, how many advertisements are watched, and if listeners have a subscription to SoundCloud Go+.

SoundCloud has advertised the new method of monetization as being more ethical, and granting the ability to grow and nurture local music scenes, but is it as ethical as they say? Marketing this form of monetization is just a clever way to hide the exploitation of artists. Currently, if an artist makes $1,000 from SoundCloud, they will only get to keep $550. It is very difficult for actual indie artists to get streams or followers on SoundCloud. Popular artist BLADEE has just under a million followers on the app, and his top song “BE NICE TO ME” has almost three million streams. This song would have earned him $9,000 on the current monetization model. The juxtaposition of this to a smaller artist with around 100 followers is shocking. Most artists that I know only have around 100 followers on SoundCloud and get 500 streams on their most popular songs.

SoundCloud, like all other streaming services, has been taking advantage of smaller artists to only pay the top artists with the greatest percentage of total streams on the platform. Streaming services were created by corporate music industry lobbyists to maximize profits for the companies, not the artists. The new monetization method is more equitable but still gives artists unrealistic expectations of earning music through streaming. This could cause people to think that streaming pays enough to live off of. The truth is, fans still need to support them by sharing their music, buying physical copies of their music, and going to their shows once it is safe again. This is a step in the right direction for SoundCloud, and will hopefully set a precedent for other streaming services. For now though, this is another reminder that there is no ethical consumption of art under capitalism.