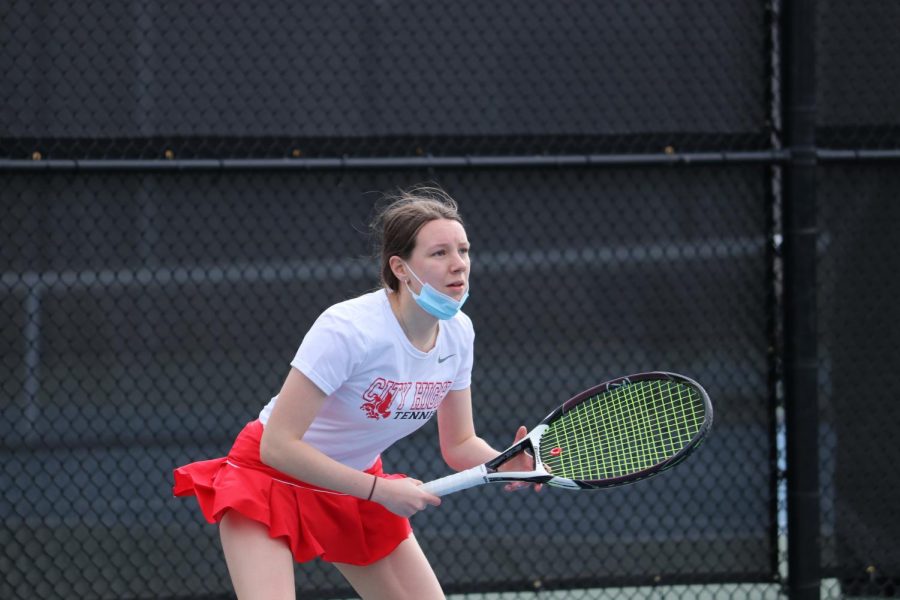 Anita Venzke '21 playing in a match against Kennedy.

On Tuesday, despite cold and blustery conditions that caused tennis balls to bounce out of reach, the women’s varsity tennis team defeated Waterloo West. The team won five out of six singles matches and one out of three doubles matches.

“The cold weather wasn’t the nicest but I felt like I played strong and it was a very good match,” Evelyn Wolfe ‘21 said. “I think there were moments where I lost focus a bit, and my opponent didn’t give me many opportunities to come to the net where I like to play best so I had to adjust to that, but it was a good opportunity to work on my groundstrokes.”

Last year’s tennis season got canceled due to COVID-19. Now, the team is back on the courts, practicing at the Hawkeye Tennis Recreation Center while the City High courts undergo construction. Looking forward, the team has many upcoming matches and is preparing for regionals and state at the end of the season.

“I am excited that our next few matches are at home so that some of my friends can come [to] watch me play. I’m just excited to keep improving, especially in competition,” Wolfe said.