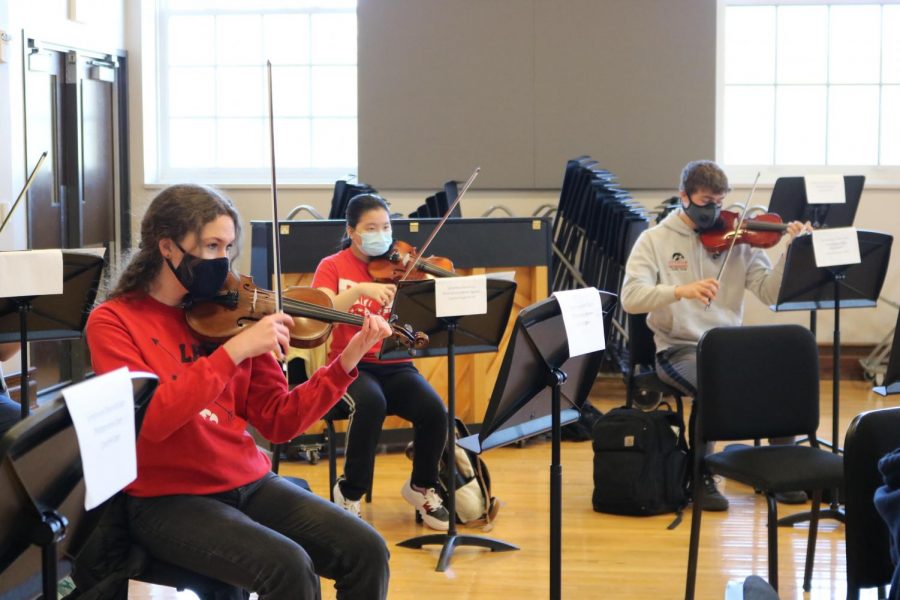 This year, students chose between online and in-person programs for school. In the City High music department, this split up the band, orchestra, and choir, making it unable for them to rehearse and perform as one group. Recently, however, students in the online program have been given the opportunity to participate in in-person rehearsals during school.

“[In-person rehearsals] were something that we discussed with Mr. Bacon. We asked if that would be possible to offer the opportunity for students to attend,” Tyler Hagy, one of City High’s choir directors, said. “Of course, not requiring them to come, but just allowing them to if they felt safe and had the time and interest to come along so that we could prepare for the upcoming concerts that we all have.”

“Having a bigger ensemble is always helpful,” Hagy said. “Thinking back to the hybrid time that we had for most of the beginning of the school year, my one choir class had four students at any given time. And to go from that to a choir of 30-ish people feels a lot different.”

While having online and in-person students together has made rehearsing easier, the band, orchestra, and choir have spent the year adjusting to Zoom rehearsals.

Alice Boerner ‘22 recently took up the opportunity to come to her in-person choir rehearsals after a year of doing school online.

“Trying to work as an ensemble online is so hard,” Boerner said. “I would be on Zoom and we would be trying to practice the songs, but it’d be so hard for me to focus and feel like I was part of the group. I really wanted to come in person, because it feels so much more like a community when I’m there.”

When Boerner first came to in-person choir rehearsals, she experienced some adjustments compared to her previous Zoom rehearsals.

Overall, Boerner has enjoyed coming to school and participating in choir.

“I like that I’m able to go and see some people at school because otherwise, I’m fully online,” Boerner said. “That’s the only time I have really stepped foot in the school. It’s been kind of fun to go back to school a little bit and see some teachers, get out of my house, and be a part of the musical ensemble.”

The band, orchestra, and choir each have their own upcoming concerts. Additionally, the music department is planning an ‘arts fest’ event. This outdoor event will allow ensembles to safely play together and showcase their work to a larger audience. It will also include groups like show choir and jazz band.

“We’re trying to offer everybody kind of a culminating experience in a sense. Our show choirs, their season ended in March and they weren’t really able to have any kind of audience,” Hagy said. “It will be good to give them that opportunity where it’s an outdoor setting to share the work that they did over the course of this year.”

Despite the challenges that the music department has encountered over the year, Hagy is happy with the overall progress that has been made.

“For me, the work is worth it, because we did the work. You know that’s important just to build a skill, and learn the pieces and learn about different things that relate to that,” Hagy said.