A Look Into This Year’s Fall Play

With a year out of the ordinary, City High brings to the stage a lively, wacky comedy 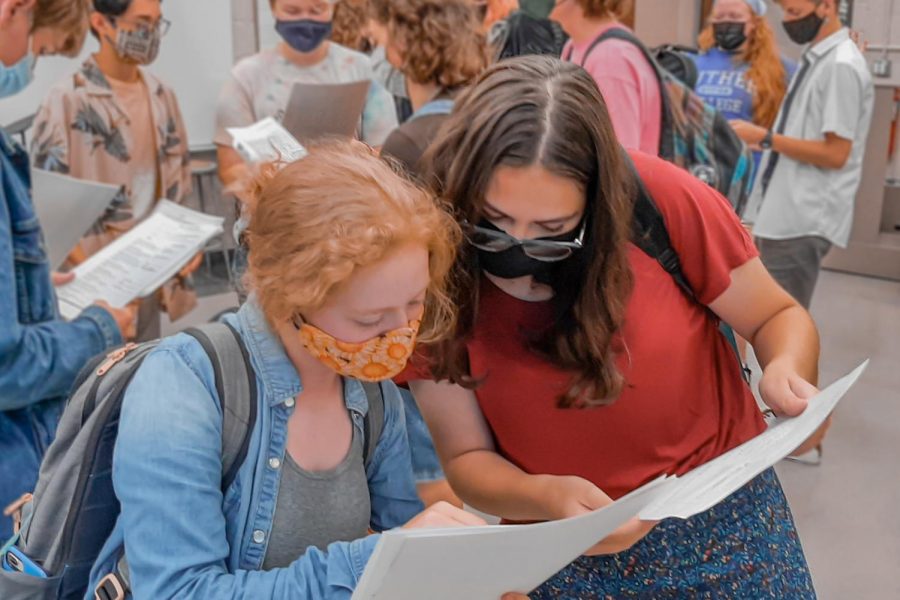 Students read through audition material at this week's informational meeting.

Gathered closely together in a small room, students interested in drama assemble to learn about what City High’s next production will be in a time far from normal. After a year undermined by strict COVID-19 restrictions, the fall play will kick off the season with a much needed sense of energy and community that the previous year lacked.

Named “Noises Off!”, the comedy follows a group of characters putting on a play. The story unfolds with a dress rehearsal followed by a plot riddled with drama, from fights breaking out to passionate love triangles and everything in between.

“[Noises Off] is done in kind of a comical way,” Peters said. “The farce is all these entrances and exits and misunderstandings and love interests. There’s a lot of humor that comes out of that.”

The show will also have an elaborate set design, including a rotating stage set that will turn 180 degrees.

“[The design] is going to take a lot of students and expertise. The tech crews are going to have to really come through this time,” Peters said.

With changes in COVID-19 mandates in the Iowa City Community School District over the last several months, the drama team will have fewer performance limitations than in the previous year’s production. The tech crew has plans of recruiting a larger team, considerations are being made to perform mask-free, and unlike last year’s production, “Matilda,” this show will once again be full-length.

“I’m hoping that we’ll be able to do the full show,” Anna Mattson ‘23, who acted in “Matilda”, said. “Last year, we had to cut down the show a lot so that we wouldn’t have an intermission. That meant that there was a lot less for us to learn.”

The play will have a smaller cast than in many previous plays, with only nine students playing the roles.

“Even though it’s a small cast, and there won’t be as many people [as usual], you’ll be able to make closer friends. It’ll be a really fun play,” Mattson said.