Bottling Up Plastic at City

Single-use plastic consumption has grown exponentially since its invention, and City High is not exempt from the use of this familiar substance 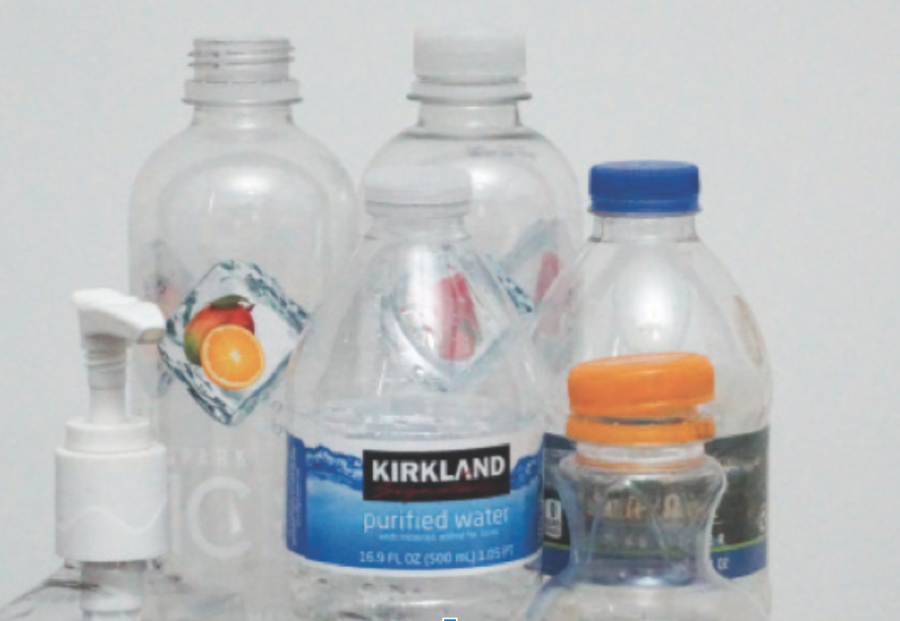 Single use plastic bottles, such as the ones that are found in school cafeterias, are one of the factors contributing to increased plastic waste.

It’s widely accepted that plastic waste has a major environmental impact. Among the growing amount of trash polluting the ocean, there are over 200 thousand tons of plastic. Efforts to create individual awareness about plastic consumption are becoming more prevalent. Due to the growing amount of plastic in the environment, City High is working towards a smaller plastic footprint.

“The district is taking steps to make sure that the proper recycling practices are being put in place,” John Bacon, City High’s principal said. “They’re bringing over the [recycling bins] where everything doesn’t have to be perfectly sorted. It’s going to be more like the curbside recycling at home where you just put all of your recycling [together]… and then sorting must happen down the line.”

The new recycling program involves less pre-sorting and more accessibility to recycling bins throughout the school. This was implemented to help with the amount of plastic that City staff and students throw away on a daily basis. Another shift that City High has already taken into consideration is changing from paper to plastic products in the lunchroom.

“We’ve made the transition back from plastic milk bottles to paper products,” Bacon said. “I assume that has to be better.”

During a normal school year, it is estimated that a student who uses single-use disposable plastic creates 67 pounds of waste.

“Obviously the biggest area of consumption is around lunch,” Scott Jespersen, City High’s vice principal, said. “Getting away from paper plates would probably be best, but it’s hard to manage that.”

With the amount of plastic that’s gathering in the ocean, it’s been normalized to see plastic littering our beaches and floating in the water. Large plastic-producing corporations are debatably the root of the problem; but supply and demand contributes to the issue. Out of the top eight producers of single-use plastic products, five are American owned. Bottle producers such as Coca-Cola and Pepsico are the largest to blame, according to the Changing Markets Foundation, with over 5 million metric tons of plastic produced between the two companies annually. Less than 10% of all plastic ever produced has been recycled.

Many students and staff at City are using reusable water bottles. The school also has water bottle filling stations on every floor and in most hallways.

“I use reusable water bottles. The refill stations are cool, but I’d definitely like to see more, Liam Murphy ‘24 said.

Along with reusable water bottles, aluminum cans are a good plastic alternative for things like soda and other drinks, since aluminum can be recycled almost infinitely. There are more and more biodegradable “plastics” that are being engineered and produced daily, and things like a single-use compostable fork or straw are becoming mainstream. An article on plastic alternatives from USA Today shows many options besides plastic, such as reusable waxed cotton instead of plastic wrap or silicone bags that can hold sandwiches and other food items. Compostable garbage can liners are shown, as well as bags made of starches for storing clothing and other items. The main argument against most of these alternatives is the initial price of the item, however when factoring in the amount that is spent on a weekly or monthly basis on single-use plastic goods, that price seems much more reasonable.

“With [eco-friendly] options, You always have to look at your cost. Is it sustainable from a school’s standpoint?” Jespersen said.

Paper is another marketed alternative to plastic that breaks down in the correct conditions. Although it is a better choice when compared with plastic, single-use things still build up in our landfills no matter what material they’re made of. Anderson Erickson, the company that City High uses for milk, has both plastic and paper options. Cardboard cartons are three cents to produce, and six cents for the plastic alternative (with lid and label). With the average person using 156 plastic bottles a year, the double cost adds up in your wallet, and the plastic adds up in oceans. Jim Leape, co-director of the Stanford Center for Ocean Solutions, estimates that by 2050 plastic in the ocean will outweigh fish. Some studies have even found microplastics in fish and other marine life that live over 6 miles beneath the ocean’s surface. Leape shares that 25% of seafood holds microplastics, and almost all tap water contains plastics as well. Even our table salt isn’t exempt from plastic.

“If we don’t ever explore possibilities I don’t think we’re going to make any progress,” Bacon said.

Products made with paper tend to use up to 10 times more energy to produce, and more water than its plastic counterpart, which can make producers shy away from that choice due to cost of production and the expenditure of other resources. Sure, using exponentially more water and energy to produce something isn’t ideal or good for the environment either, but using less resources to produce something that will stay in the environment for quite literally hundreds of years isn’t ideal either.

“The more we learn about biodegradable oils and some of the newer technologies that can break down much more quickly, I think that’s when we’ll see some gains,” Jesperson said.

Although City High has made sustainable advancements, such as geothermal heating and cooling in the new cafeteria and gym addition, Jesperson reports that there are still things that could be changed about the school’s plastic consumption. In society, norms surrounding plastic usage are changing.

“When I was a kid, when you ordered a Big Mac at McDonald’s, it came in a styrofoam container instead of paper around it, and [changing] from that was a weird shift,” Jespersen said.

While it may seem to be a “weird shift” at first, Murphy thinks it is ultimately better for the world and our planet to try and use either reusable or biodegradable options. Murphy reports that starting the conversation is a step in the right direction.

“Plastic is obviously bad for the environment, I’d definitely like to see things move into more of a green area. I think it’s just objectively the right choice,” Murphy said.