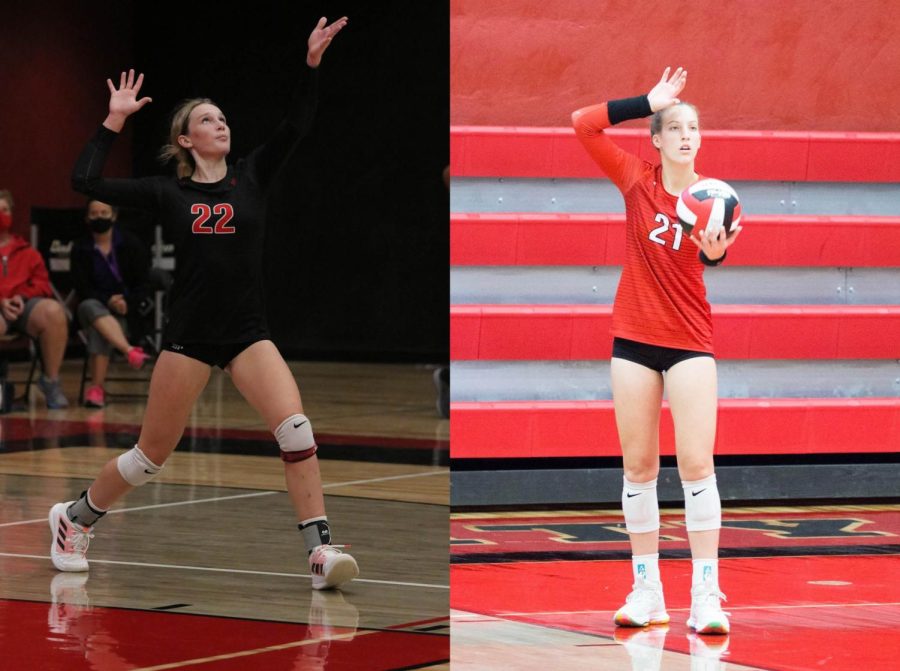 Claire Ernst '24 and Emmy McComas '25 go to serve a ball during a City High Volleyball game.

What got you started in volleyball?

EMMY: In seventh grade I tried out for volleyball and my coach was David Rogers, who happened to be the Rockets volleyball head coach and founder/owner, and I’ve just loved [it] ever since.

CLAIRE: My mom put me in this league when I was six, and then I was pretty good so I decided that I’d try for a club team. The following year, I made that and now I’m here. I started my first club team when I was eight, but I started playing rec ball, ever since I was about six.

What was your initial reaction to being placed on the varsity team?

CLAIRE: I was definitely nervous and scared. But I was really excited.

What is the most challenging part of being an underclassmen on the varsity volleyball team?

EMMY: Definitely just the pressure I put on myself and wanting to do good for the team.

EMMY: Cucumbers with ranch on the side.

CLAIRE: I’d have to go with some nice, juicy carrots.

What’s your favorite part of volleyball?

EMMY: I definitely love the exhilaration you get when you either get a kill or good pass or even just working with some fun girls on a team.

CLAIRE: I would say just the adrenaline and the happiness that you get, or the satisfaction with yourself after you score a point or do something really good.

Tell me about the team dynamic of the varsity team?

CLAIRE: I think we work well together. I think we all get along pretty well. And I think that we all really are focused on wanting to get better and improve every day.

Tell me about a game that had a big impact on how you play?

EMMY: I went to this tournament for a club team in Illinois, and it was that last game that we won that determined if we went to Florida or not. And we won it, and went to Florida, so that was a pretty spectacular moment in my career.

EMMY: I’d say indoor for competitive and sand for if you want to hang out with friends and have fun. In sand I love being able to not have to worry about twisting an ankle or anything like that. Sand is a lot different than indoors because indoor is more competitive. In sand it helps you gain more confidence to dive indoors.

CLAIRE: I like indoor for more competition, but I also really like sand because I think you can work on a lot of things. You can’t jump as high in sand, and so it helps you develop certain aspects of the game that you can’t necessarily work on indoors, and so I think it’s good to mix it up some.

Any advice for younger players hoping to reach as high of a level?

EMMY: In being so young with an older group of girls and being one of the two youngest girls, I feel like there’s a lot to show if you care about the sport of volleyball and want to succeed in it. Volleyball is a game of mistakes, and you’re going to want to go out and play your best, because everybody on that court has made a mistake. Working hard is going to improve your skill set and keep you moving forward in your career.

CLAIRE: Don’t be afraid to step out of your comfort zone because that’s how you grow as a player. I think that’s one of the best ways that you can improve is if you go to a practice and you know that all the girls are going to be older than you and you know that they’re going to be better than you. That can be a really good thing for you because you can learn from them and it can help you grow even more as a player and I think that helps me a lot with my careers. The number one quote that I live by is, if you make a mistake, how you come back from that defines the type of player that you are and shows what type of character you have. I think that on the court I use that quote a lot. Your attitude is the core of what defines you as a player, and I think that’s the biggest thing, it helps you hold yourself accountable and give you your confidence back.