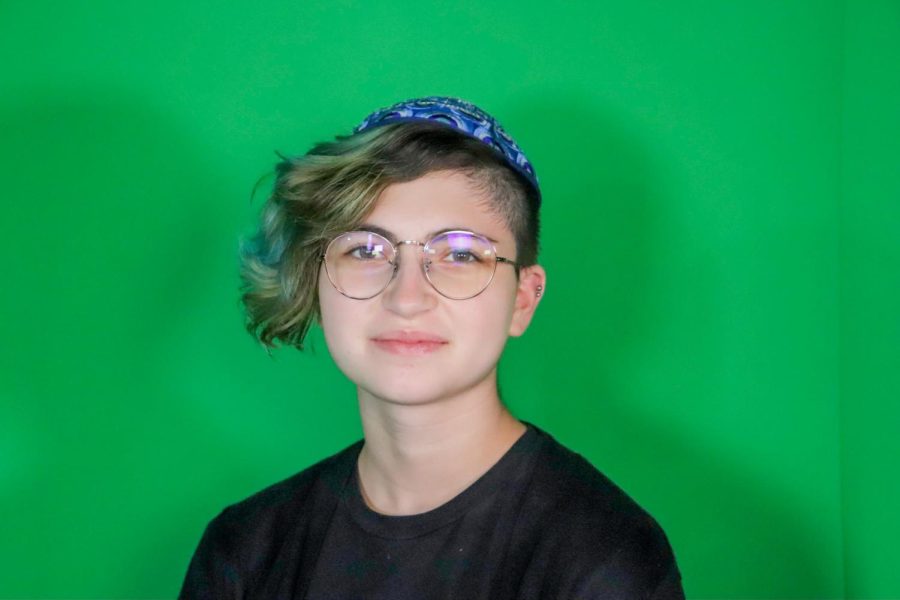 Q: How about you talk about your name?

A: So my legal name is Frieda, Frieda Kenyon Brown. My parents talked a lot as I was growing up about Frida Kahlo because I was named after Frida Kahlo. I  didn’t identify with her, her art just kind of wasn’t my style. It was the way that my name was very much hers. It felt like the name wasn’t mine at all.

The thing is, if I liked her art, if I looked up to her then maybe it would have been fine. But it didn’t really mean much to me, so it felt like my name was being taken away. In addition to that, I’m non-binary, Frieda is a very feminine name. I actually chose Alex first. Then I thought, well, Alex is a very common name. There’s going to be like three Alex’s and some of my classrooms, so I have to have something to add to that. I chose Alexei, technically choosing Alexis first. My brother jokes about it all the time. I found the name, Alexei, in a spider-man movie, he got very mad that I stole my name from a spiderman movie.

I don’t like Alexei from Spiderman movies though, he is Russian but that is it. My family is Jewish, and we’re from Russia. We’re technically from the Middle East. But the last place we were before the US was Russia before we fled.  My name Miriam was my Hebrew name but not my legal name. I chose that to be my new middle name because Alexei Pi sounded weird. Then Hockenberg, I didn’t want to keep Kenyon Brown, there’s no hyphen, it drives me nuts. So I chose Hockenberg, which was my grandma’s maiden name. Actually, certain members of my family got very excited about the name being revived because my grandma was one of two sisters that both married and changed their names.

Q: Do you have any interesting anecdotes about those people your last name is named after? How did it make you feel?

A: My great aunt, when she found out, called me and she left the most beautiful voicemail. I still have it saved but I’m not going to play it out. It made me cry. I was so happy because I’ve been getting a lot of negative stuff from my parents. They didn’t really want me to change my name. That’s why it’s still not legal because I need their permission to change it before I turn 18. To hear someone so happy about it, it was great.

A: Yeah, it doesn’t change who you are. It’s like the whole Romeo and Juliet thing, a rose by any other name would smell just as sweet. It sounds ridiculous, but it’s also true. You know, it’s language, names, whatever. They just identify you, and your name is a big part of you. If you don’t like that name, that’s a huge part of you and you can change it to match. If people don’t like it, then they’ll get over it. Or maybe they won’t, but that’s their problem.