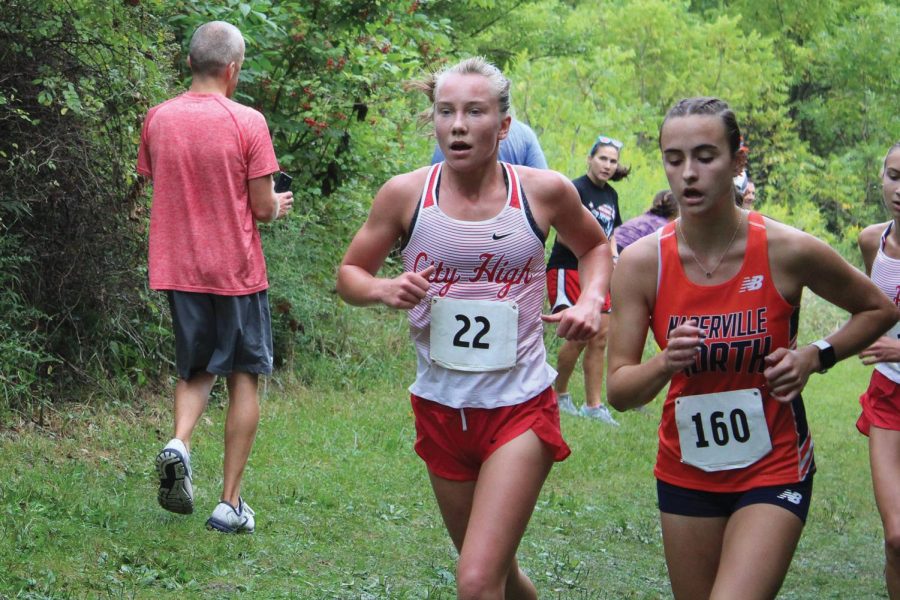 When Ani Wedemeyer ‘25 started cross country, she didn’t think she would like it. Two years later, running is a huge part of her life.

“When you’re feeling good, and you’re running, it feels so great,” Wedemeyer said. “[Running] is a way to push yourself in a way that nothing else does.”

Wedemeyer started running in seventh grade when she joined the junior high cross country team. During this time, she was also a competitive gymnast, practicing up to 19 hours a week.

“I love running and running in such a positive environment,” Wedemeyer said. “Gymnastics kind of wasn’t [this environment], the coaching is so different.”

Wedemeyer ended up quitting gymnastics at the end of eighth grade.

“I wouldn’t have been able to do both running and gymnastics,” Wedemeyer said. “I wanted to do running.”

This year, Wedemeyer is running on the varsity team at City High. In comparison to her gymnastics team, Wedemeyer has enjoyed this team environment.

“Being on a team like this is something I never experienced in gymnastics,” Wedemeyer said. “I was obviously on a team, but it was not the same. It feels like a family here, instead of just people you practice with.”

Wedemeyer has also enjoyed new challenges that have come with the change from junior high to high school cross country.

“[In] junior high our long run would be five miles, now we did that for recovery after our race. So it’s really different,” Wedemeyer said. “The people also take it more seriously; it’s not just an activity or an after school thing.”

So far this season, Wedemeyer has been running in the number one spot on varsity, with a PR of 20:23. She runs alongside her sister, Iris, who is also one of the top runners on the team.

“If I were [Ani’s] teammate, I would say that watching her and how she does things in practice is going to show you how to do it the right way,” Ryan Ahlers, a head coach of the team, said. “The way that not only the coaches want it done, but really the best way to do it, how to be effective in the sport.”

At the team’s recent Pleasant Valley meet, Ani placed first on the team and 22nd overall.

“Ani doesn’t shy away from racing. We’ve seen it in the time trial in one meet so far this year, and there’s a lot of great things for her coming up,” Ahlers said. “That’s one thing that I truly admire about coaching her: she embraces every aspect of training but also the racing, and she enjoys it.”

With upcoming district and possible state meets, Ani has many opportunities ahead of her.

“I see her growing in the sport and becoming one of the best in the state,” Ahlers said. “Beyond that, I think the sky’s the limit. She can go collegiately and beyond. She’s a talent.”