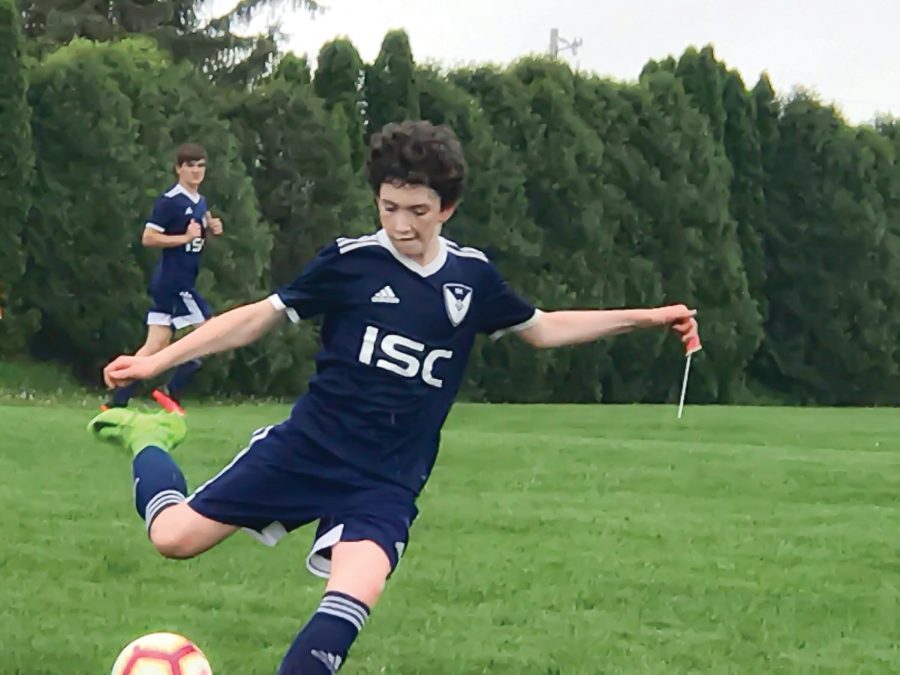 For Jonah Bowen-Burt ‘25, soccer didn’t start as a competitive sport. It started as a way to spend time with his grandfather over a shared love for the sport.

“Every time I played [soccer], I ended up having a good time,” Bowen-Burt said. “ I wanted to really commit myself to practicing every day and working [hard]. I just enjoyed it.”

Bowen-Burt started playing soccer when he was 4 years old. Since then he has gained years of experience, playing on teams such as CRSA (Cedar Rapids Soccer Academy), and ISC (Iowa Soccer Club).

“I’ve known Jonah since he played at CRSA,” Colin Crichton, Jonah’s current coach at ISC, said. “It looked as if he had the ability to go pretty far in the game, and we’re fortunate that he decided to come to ISC.”

One thing coach Crichton values about Jonah is his ability on the ball.

“He’s got this ability where he can dribble at players and they don’t know which way he’s going to go,” coach Crichton said. “That really helps the players around him because they know he feels comfortable on the ball and rarely gives it away.”

One thing that Jonah does that helps him improve as a player is to watch the professionals play.

“Jonah watches the game a lot, and sees how the [professional] players play the game,” coach Crichton said. “He watches to see the movement of players and how they can get into space and receive a ball without being under pressure, which has definitely helped him improve.”

Playing on soccer teams his whole life, Bowen Burt values the team aspect of the sport.

“Teamwork is by far the most important part [of soccer],” Bowen-Burt said. “If a teammate makes a mistake it’s ok, you make mistakes too. We’re kind of like a big family.”

This fall, Bowen Burt is running cross country, as well as playing on a club team for soccer.

“[Cross country] is mainly just for conditioning and staying in shape for soccer,” Bowen-Burt said.

With soccer season starting in the spring, Bowen Burt is looking forward to joining the team.

“I’ve heard a lot of good things about it [from friends],” Bowen-Burt said. “I’ve also watched a lot of games. It seems like such a good time.”

Bowen-Burt finds time to practice every day, whether it is with his soccer club, or alone at a neighborhood field.

“I just [want to] make a good first impression on people I don’t know,” Bowen-Burt said. “I know a lot of [people] on the team but I want to perform well and come back [with a] guaranteed varsity spot.”

All throughout Bowen-Burt’s soccer career, he has had the goal of playing in college and beyond.

“In America professional soccer is very location dependent,” Crichton said. “But I think he’ll continue to play the game until there’s nothing left for him to do.”