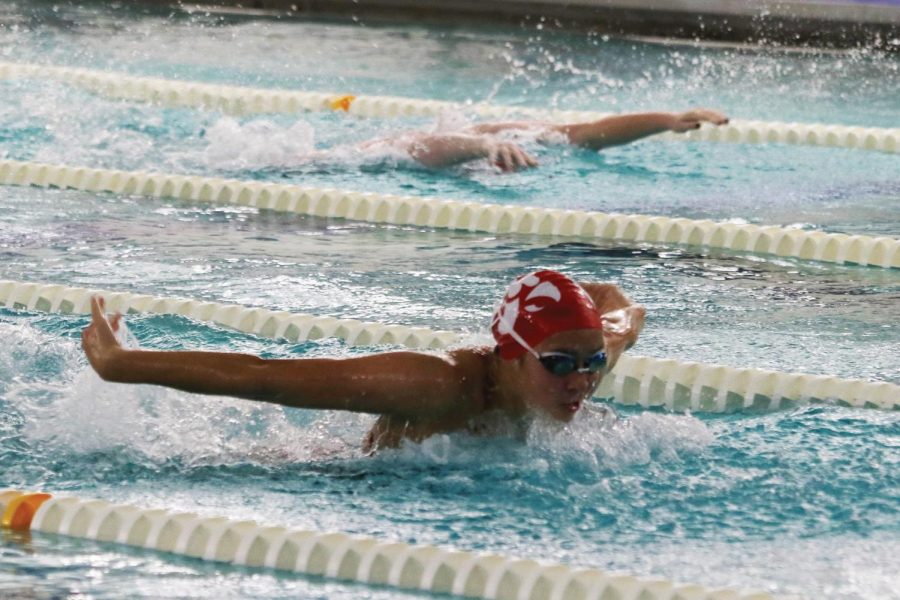 When the starting whistle blows, Grace Hoeper ‘25 shoots off the blocks into the water, speeding across the pool and pulling ahead of her opponents.

“I like that [swimming is] more of an individual thing than a team thing,” Hoeper said, “You don’t have to rely on anybody and nobody has to rely on you. But, you also get that team experience where you get to win as a team or lose as a team.”

Hoeper started swimming with the Iowa Flyers Swim Club when she was in the first grade. This year, she is swimming for the City High Varsity Swim team, as well as continuing with club swimming.

“At first I wasn’t sure if I should do high school swimming,” Hoeper said. “I talked with [the coach, Mandi], and she was telling me about how she’s really focused on the team, and how it would be less competitive than club and more of just a fun experience.”

“I admire Grace’s ability to not only get the job done, but also to go above and beyond what the expectations are,” Assistant Coach Zach Armstrong said. “She works hard to get better every day she is in the water.”

While Hoeper goes to Solon High School, she swims with the City team because Solon does not have a swim team.

“Grace came into this year not knowing a lot of the girls, but after a few practices, Coach Kowal and I noticed that she was making friends and leading by example,” Armstrong said. “Grace is someone I can rely on when I need someone to show a skill or give advice to our first year swimmers.”

So far this season, Hoeper has enjoyed the new experience that has come with swimming at a high school level compared to club level.

“[The team] is definitely a more fun environment and a less competitive version of club,” Hoeper said. “It’s been fun talking with my friends, having home meets and getting excited about stuff instead of stressing about it.”

Hoeper has also enjoyed bonding with teammates and coaches.

“I like that I come every day, see the same people, and get to talk with those same people,” Hoeper said. “I know my coaches on a more personal level because I see them every day too.”

During the rest of this year’s season, she is looking forward to improving and succeeding as a team.

“On my club team, you get to know someone if you feel like it, but here you automatically get to know the whole team, and it’s so nice to know everybody,” Hoeper said. “I’m also excited to grow as a team. I get to see them grow and me grow at the same time.”

This season, Hoeper is working to get as many state cuts as possible and eventually qualify for state in the future.

“In our last meet, Grace met the qualifying times for 2 events at state, and I can only see that continuing,” Armstrong said. “After her 4 years at City are done, I could see her leaving with some school records and probably some state records. I can also see her pursuing swimming at the collegiate level and succeeding there as well.”